Dolphins otherwise known as Odontoceti, are one of the most beautiful groups of aquatic mammals. Most species of dolphins live in seawater and can be found in all oceans of the world, as only a few species live in fresh water from Asia and South America.

These aquatic mammals belong to the infraorder "Cetacea", a group of animals that includes whales, dolphins and porpoises.

Dolphins are well known for their agility and playful behaviour. They are very intelligent and they never cease to amaze scientists with their learning and cognition skills.

The largest dolphin species, the orca, grows to more than 9 meters long, while the smallest, the Hector's dolphin or white-headed dolphin (Cephalorhynchus hectori) is only 1.3 meters long.

The living habitat of each species plays an important role in its overall size as feeding habits often make the difference in size even within the same species.

Regardless of where they live, dolphins have to reach the ocean surface to breathe at different time intervals. This cycle can last up to 30 minutes in some large species.

A dolphins' skin color is usually blue-grey, but it can also be black, white, light grey, bluish, and even pink, or the combination of these colours varies by species. However, in all cases, their skin is very sensitive to impacts and other elements that may be in the water.

A dolphin's dorsal fin (located at the back of the dolphin) acts like a keel when the animal swims, giving the dolphin directional control and stability in the water. But not all dolphins have this dorsal fin; for example, the northern finless dolphin (Lissodelphis borealis), as its name suggests, lacks a dorsal fin. 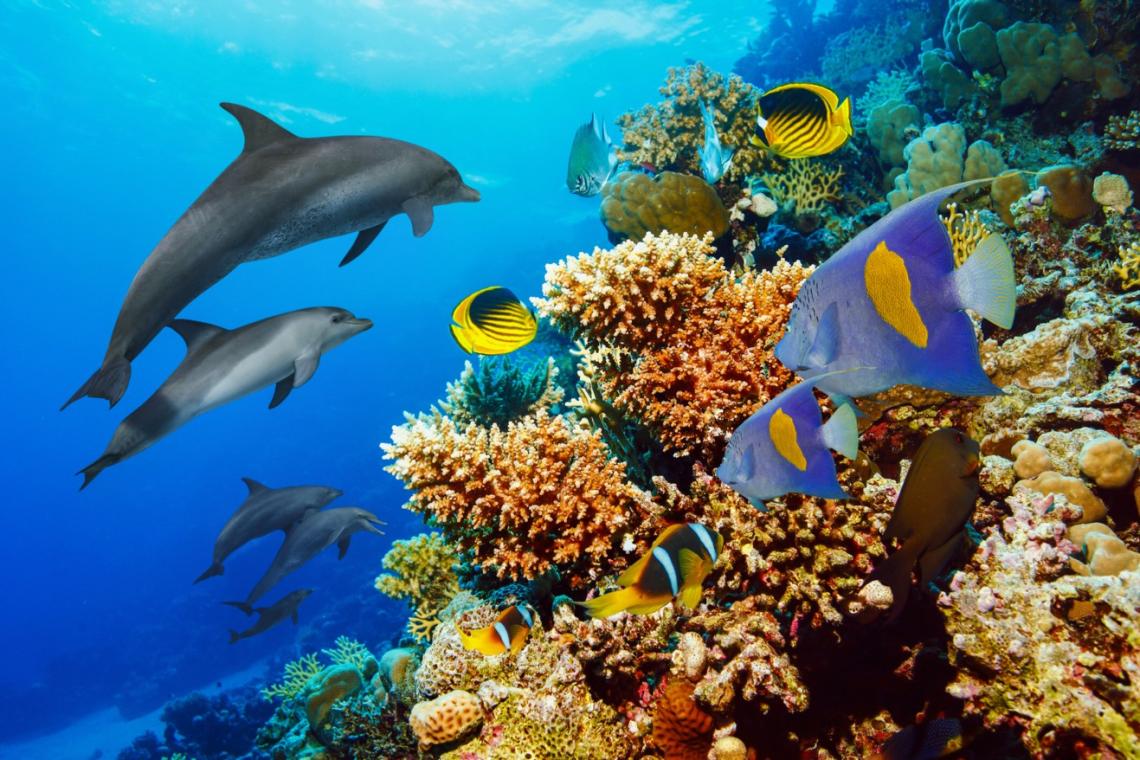 Dolphins have evolved from terrestrial animals

Dolphins did not always live in the water: millions of years ago, the ancestors of dolphins roamed the earth.

The dolphins we know today evolved from the mesonychids, an extinct species of wolf-like ungulates that had hoof-like toes at the end of each leg.

About 50 million years ago, these ancestral animals decided that the ocean was a better place to be, so they returned to the water and evolved into the dolphins we see today. The evidence of this evolutionary history is palpable in today's dolphins, as adult dolphins have remnant finger bones in their fins, as well as vestigial leg bones. 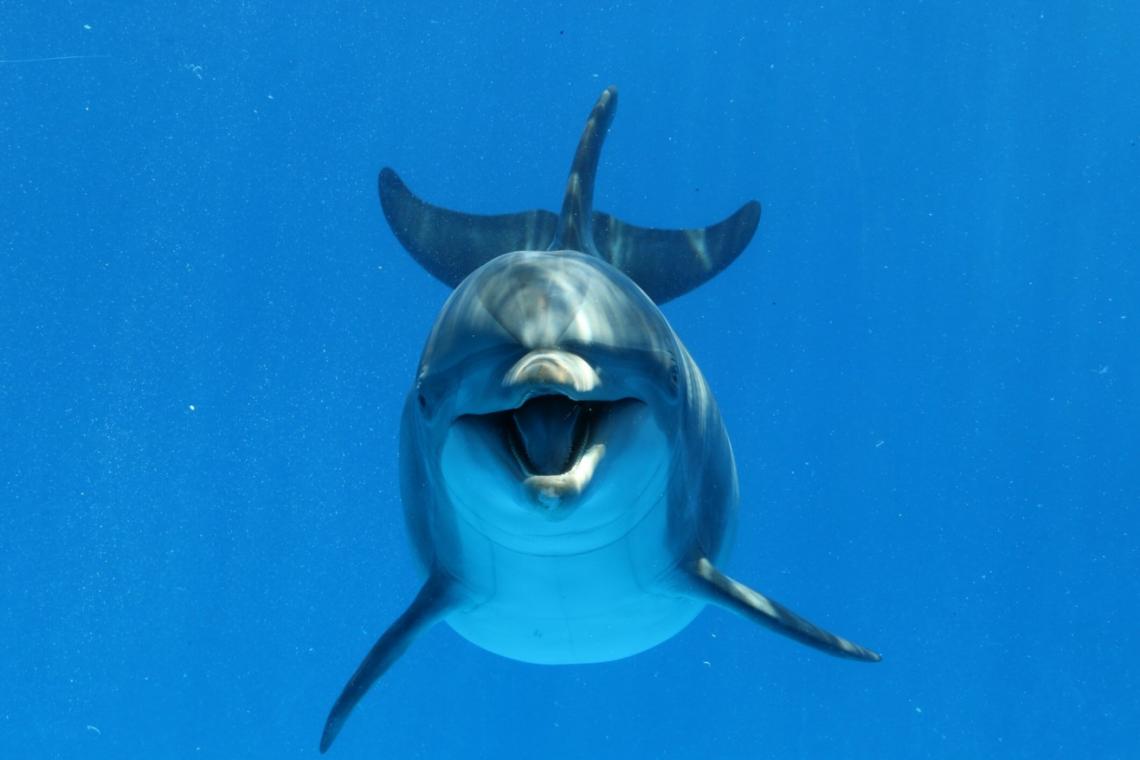 How many species of dolphins are there?

Most species live in temperate and tropical oceans, but some live in colder oceans or rivers.

Depending on their species, dolphins can vary considerably in their physical attributes and behaviour, as in the case of the killer whale, which can reach 6 to 8 meters long and weigh about 4,000 kilos. 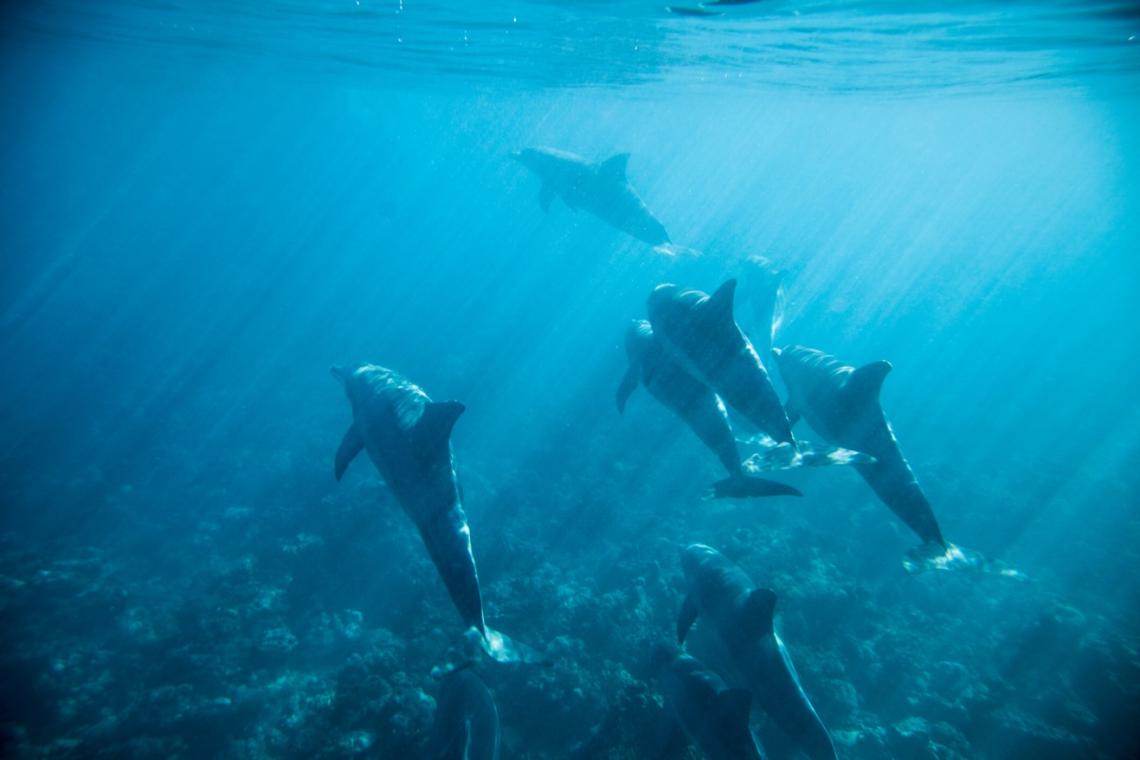 This is not a superpower, but it is true that dolphins use echolocation to see the world around them.

This skill allows them to calculate the distance, shape, density, movement and texture of an object.

Their sonar is the best within the animal kingdom, and is also superior to that of the bat.

They have the incredible capacity to emit sounds with a frequency of 120 kHz.

To put this into perspective, humans with excellent hearing can hear sounds with frequencies ranging from 20 Hz to 20 kHz. However, dolphins generally receive optimal results when the object is no more than 200 meters away from them. 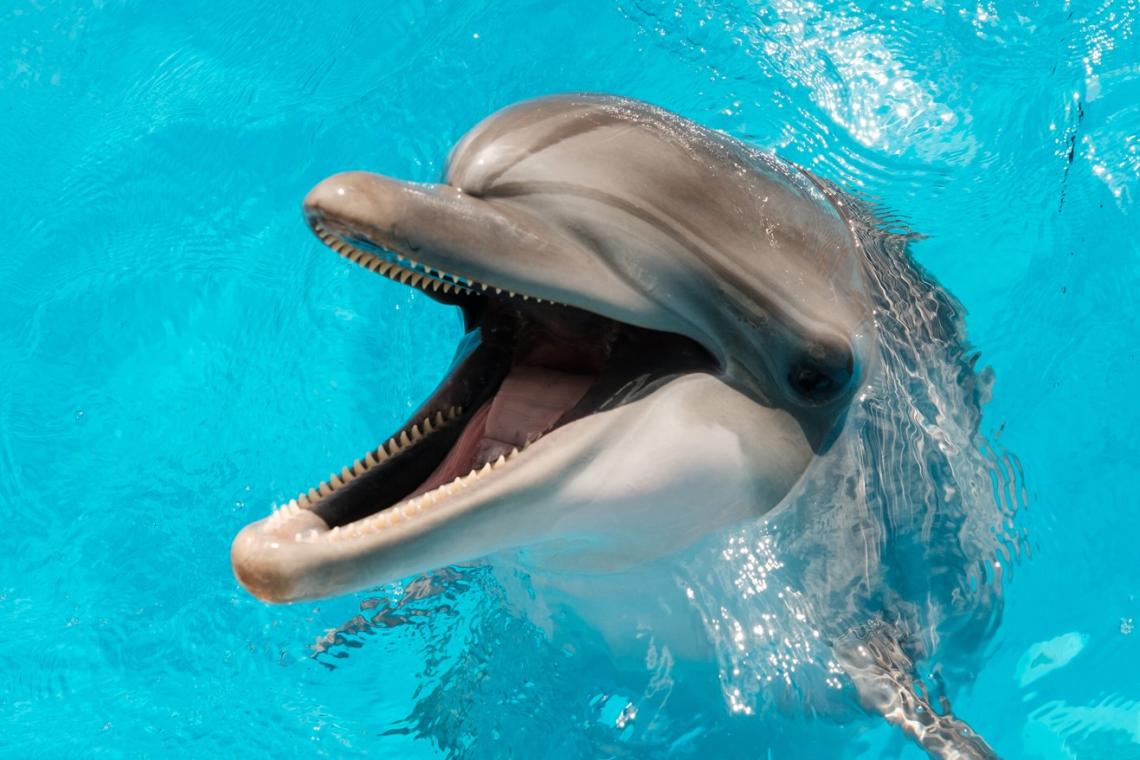 The teeth of dolphins

Although some dolphin species have up to 100 teeth, they are not used for chewing. They use their teeth only to hold the fish and then swallow them.

Large dolphins like the killer whale can consume up to 225 kg of fish a day. They usually work as a team to surround a school of fish and make them as full as possible.

Then they go through the center of the fish concentration and eat everything they need. And they even take turns doing this so that the fish don't disperse and everyone has a chance to eat satisfactorily. 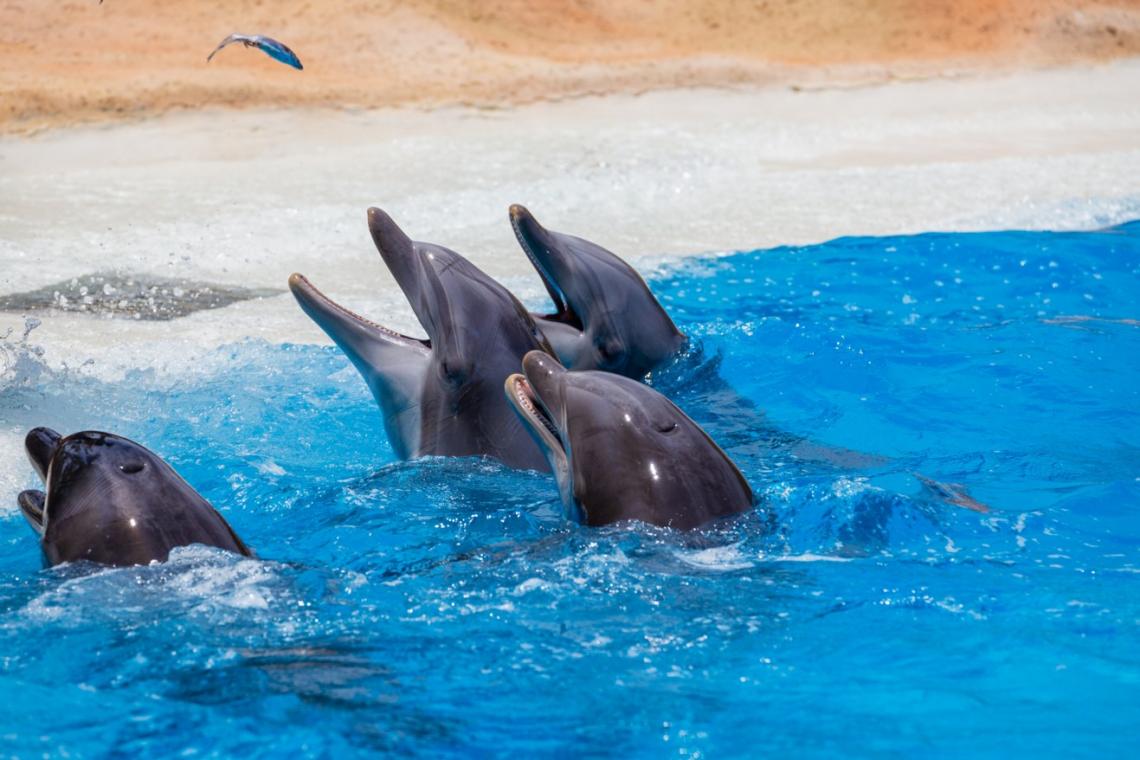 Scientists have discovered that dolphins develop their own individual whistles (names) to identify themselves and other members of their herd.

Because visibility is often poor in the ocean, dolphins rely on sound to transmit messages and communicate.

What was not known, however, was the complexity of their communication and the awareness these animals possess.

Identity is very important for dolphins because they are social animals that live in groups. 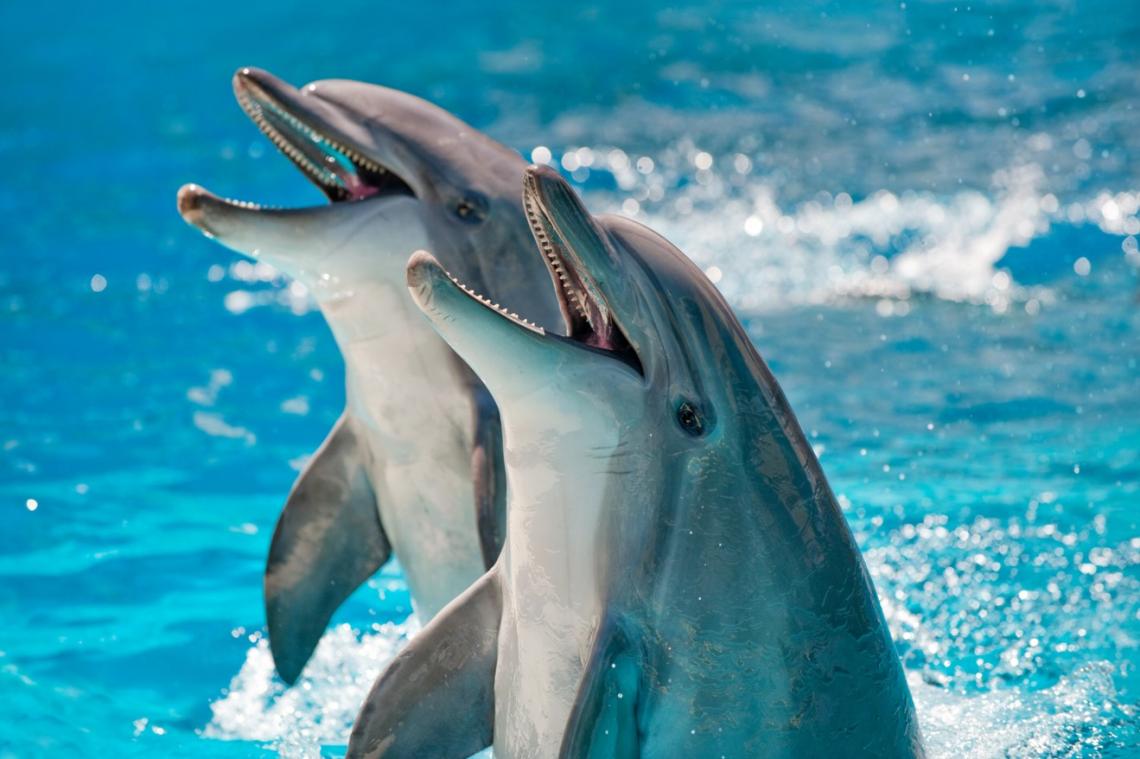 Dolphins Can Disconnect Their Brains

Because they are mammals, dolphins must remain on the surface of the ocean in order to breathe.

To sleep, they climb to the surface, exposing their spiracles, and turn off one side of their brain while keeping the other half active to continue breathing and stay alert. Instead of sleeping for several hours at a time, they rest one hemisphere of their brain for 15 to 20 minutes and take these "naps" several times a day.

By resting one hemisphere of their brain at a time, dolphins can continue to swim, breathe, and observe predators. So if you've ever heard the phrase "sleep with one eye open," you know what you can associate it with. 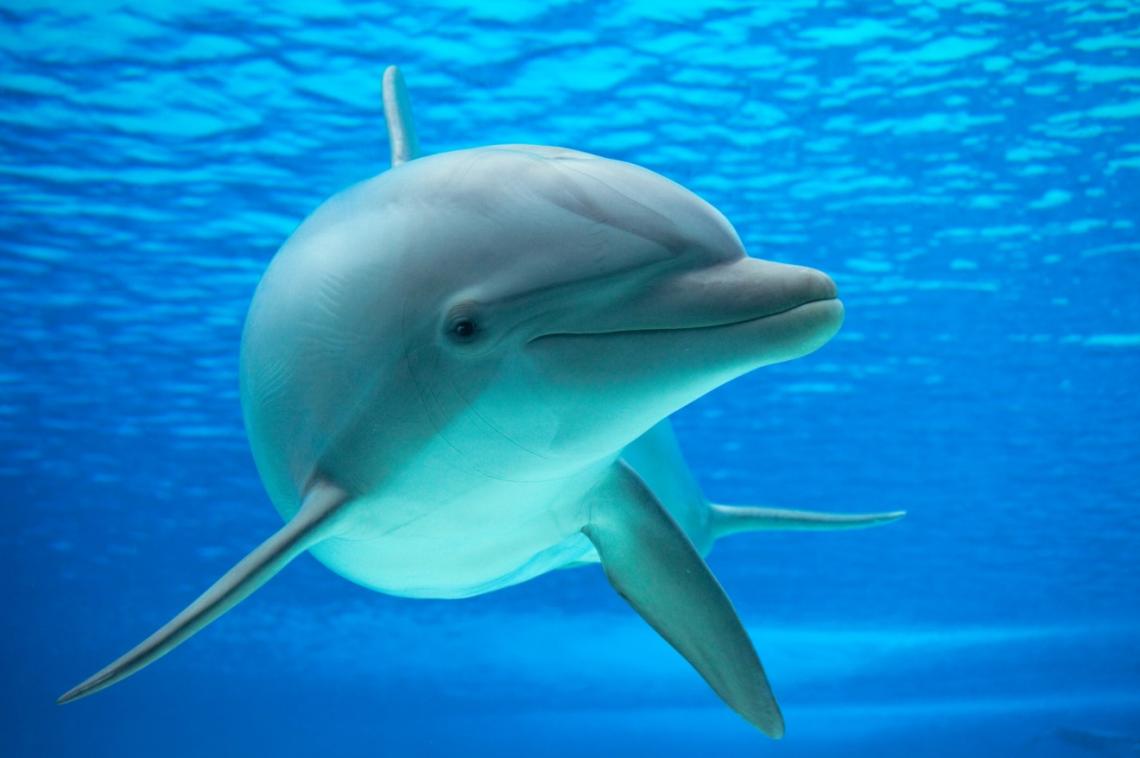 Their language remains a mystery.

Although marine scientists have studied and recorded dolphin vocalisations for decades, many aspects of animal language and how they communicate are still unknown.

Scientists have not yet broken down individual units of dolphin sounds, and they are still looking for a Rosetta Stone that links animal vocalisations to their behaviour. 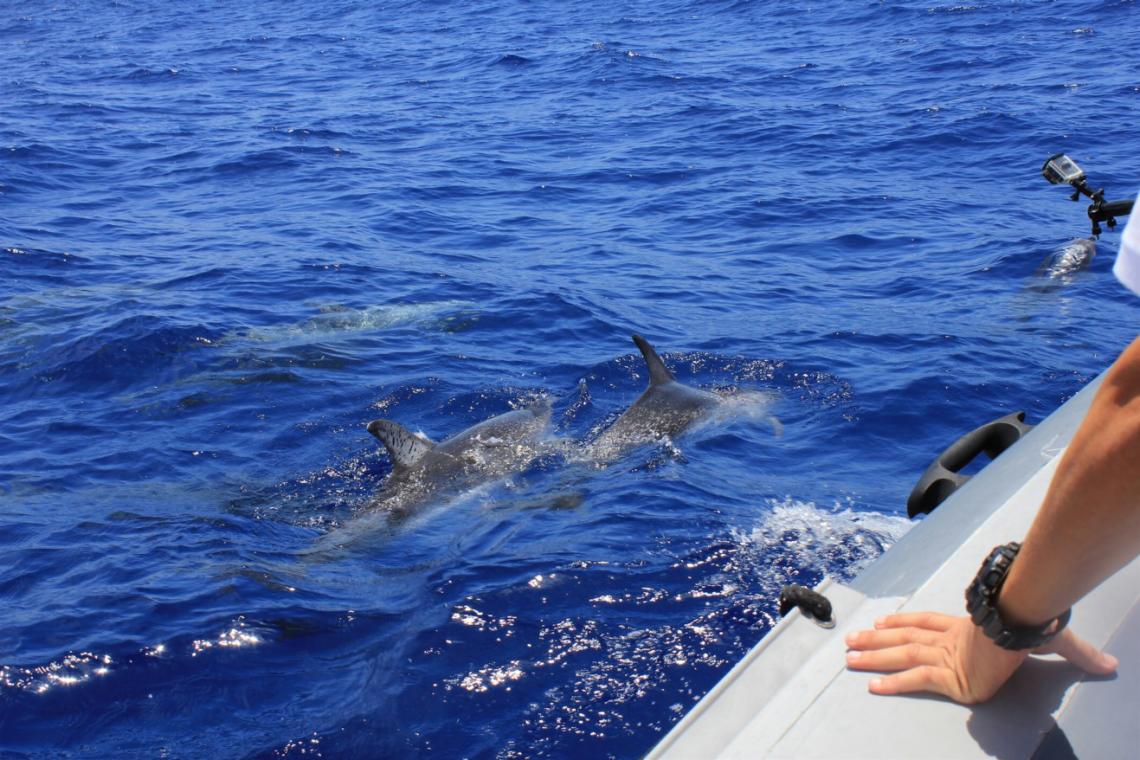 Despite the fact that sexual maturity is variable among dolphin species, males generally reach maturity at age 11 and females around age 5 or 7.

Because the genitals are hidden in males and females, both sexes have a genital cleft, but females also have a mammary cleft on each side.

Female dolphins tend to be sexually receptive for most of the year and are usually the ones who initiate courtship for mating.

Just before mating occurs, the male often rubs or strokes the female on the neck and shows an "S-curve" posture. 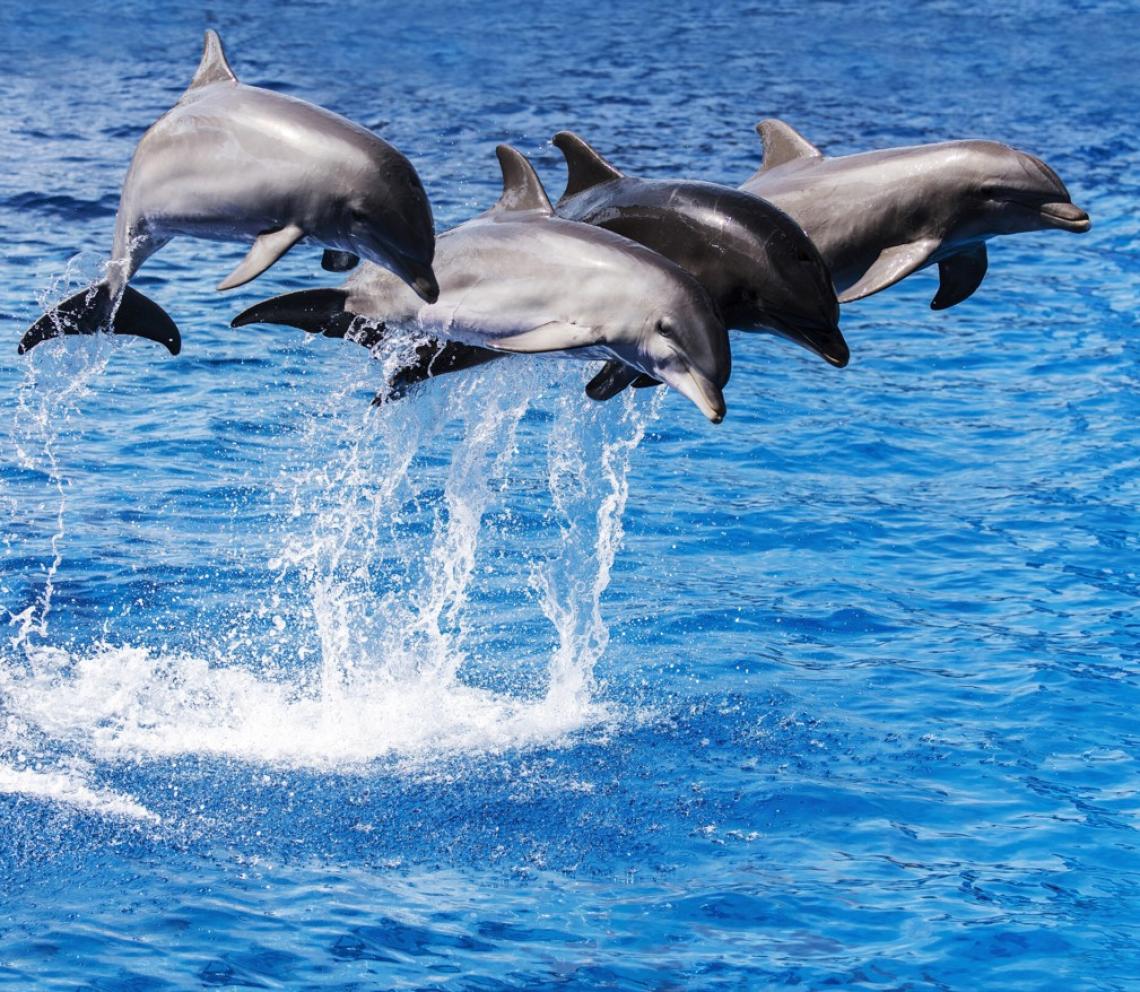 Depending on the species, most female dolphins gestate their young for 9 to 17 months before giving birth.

Interestingly, calves come out with the tail first, rather than the head, so they do not drown during the birthing process.

After nursing for one or two years, the calf usually stays with its mother for the next few years, before mating and having its own offspring. 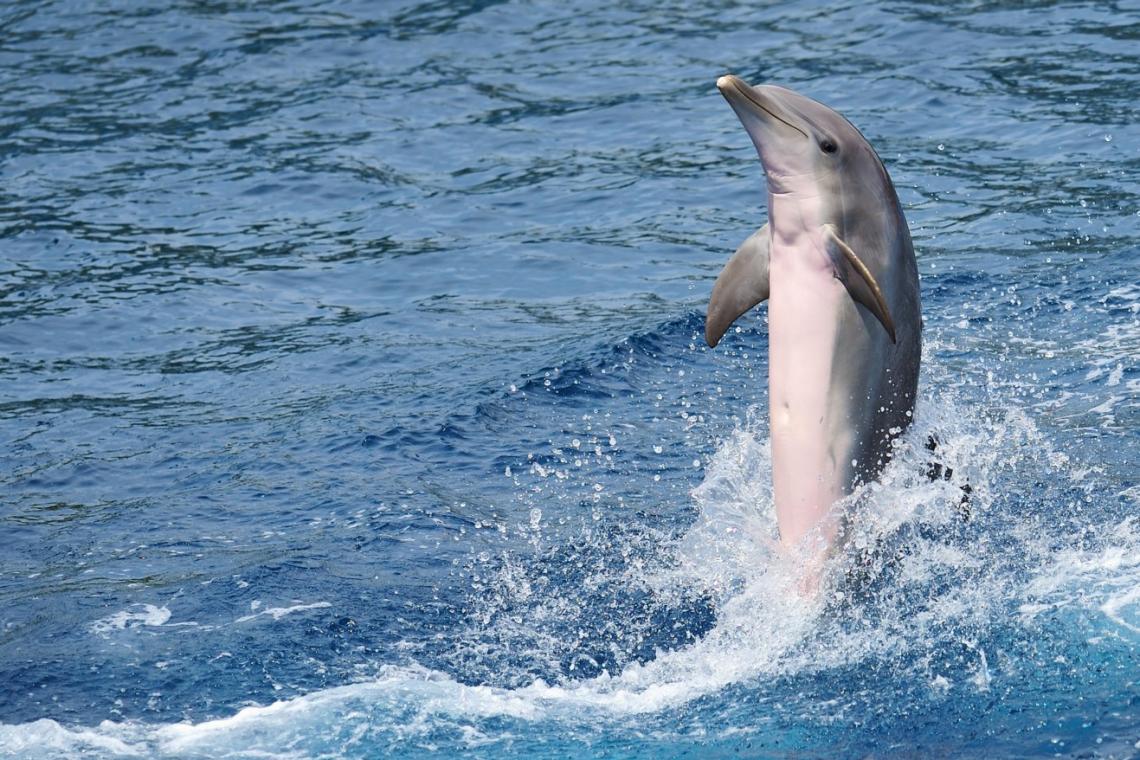 What is their life expectancy?

The life of dolphins varies greatly according to the species. Most dolphins in nature live for a few decades and, according to the Institute of Marine Mammal Studies, the life expectancy of captive dolphins is similar. They live up  20 to 35 years in the wild and 25 to 40 years in captivity. 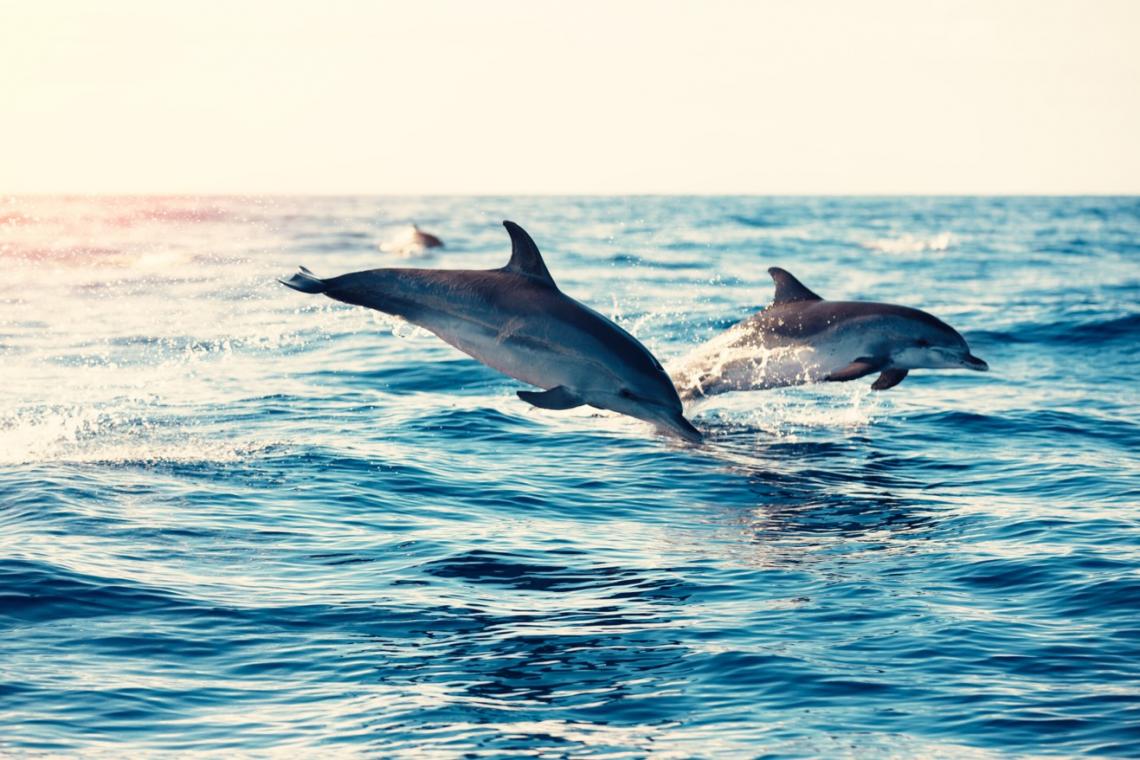 Dolphins get high on fish toxins

We know the pufferfish has strong toxins. Apparently, dolphins know it too, and use it for recreational benefit. Normally, the pufferfish toxin is deadly however, in small doses, the toxin acts like a narcotic. The BBC filmed a group of dolphins playing softly with a pufferfish, passing it among the members of the herd for 20-30 minutes, and then loitering on the surface seemingly hypnotised by their own reflection. 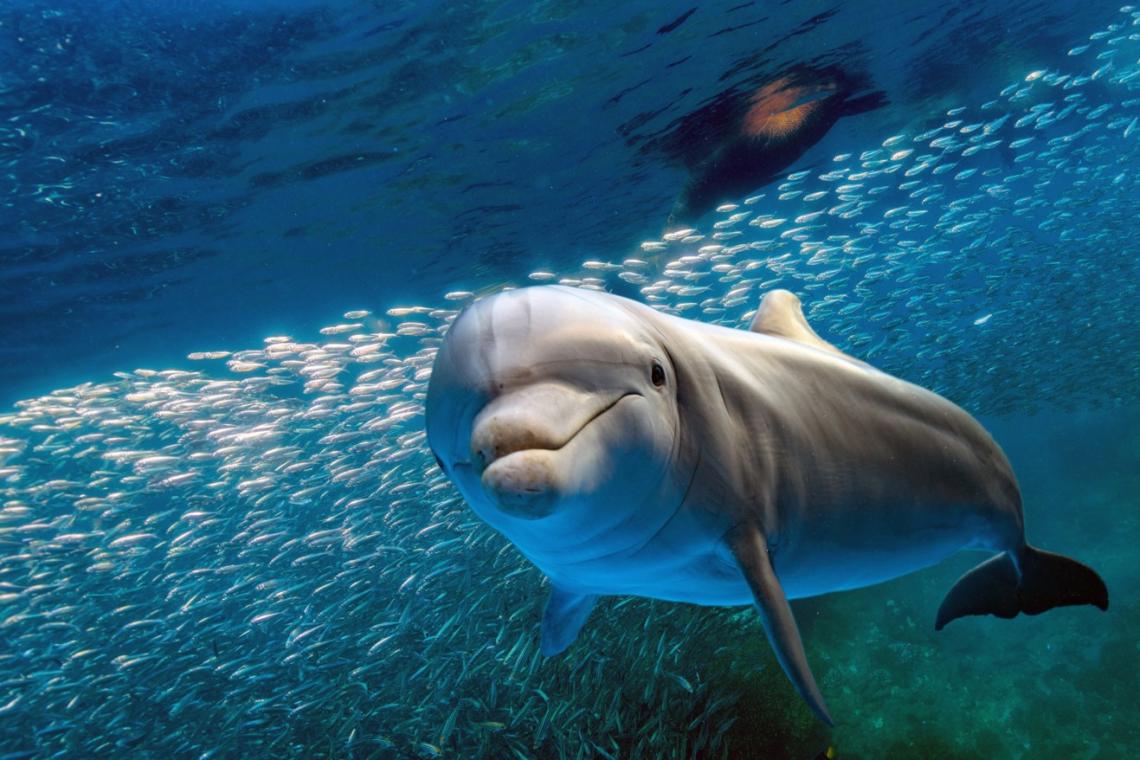 Dolphins are known for forming large families. We have already seen that they love to hunt, play and swim together, because they are very social animals so much so that they can form groups of at least 1,000 specimens.