The world’s most poisonous plants

Since ancient times, plants have been used both as a source of food (their fruits and some leaves), as a remedy for diseases. Before the technological development, the human being has had to differentiate the utilities of each one experimenting with itself and putting at risk its health and its own life, since the ingestion of some plants can be lethal for the people.

Vegetation is enigmatic and mysterious. The most dangerous and deadly species can be hidden behind a beautiful and delicate flower, and on the other hand, some of its parts can be miraculous, the key component to survival.

Why are some of them poisonous?

Over time, these plants have had to adapt to a host of climatic, earthly and environmental changes. The toxicity that some have developed is the result of its hostile accommodation and the urgent need to defend oneself from outside the world.  Evolution has allowed some animals, especially herbivores to be able to differentiate between plants that are suitable for ingesting and purifying their organism from harmful and deadly ones. You must keep in mind that the toxins of these herbs are not equally aggressive to all species. There are some that only affect certain mammals and others that affect both animals and humans. Some plants are not only poisonous during certain stages of their life so their threat is not permanent.

Although there are countless species of poisonous plants, in the following gallery you will find some of the most famous and deadly ones for their victims. 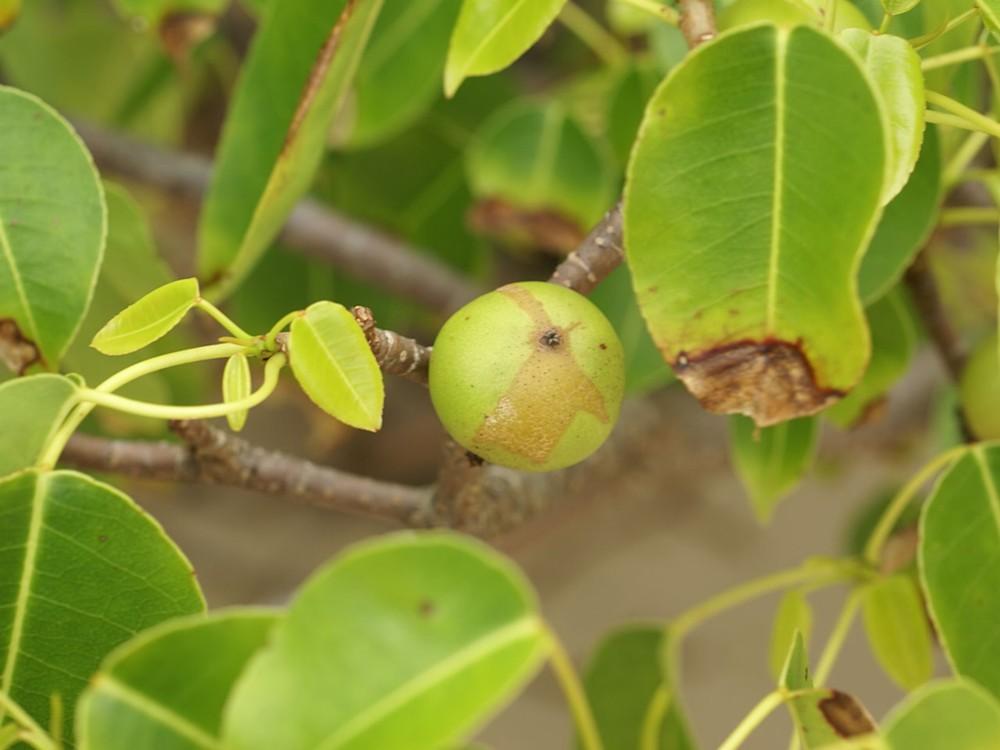 The chamomile of death or tree of death is a tree native to Mesoamerica and the islands of the Caribbean Sea. It can reach up to 20 meters high. It is tremendously toxic, and its fruit has a very pleasant smell and attractive apple-like appearance. It is lethal to humans and possibly to all mammals, so it is known as "the most dangerous tree in the world. When you rub the tree, it produces a milky sap (which contains phorbol) that causes burning, can inflame the skin tissues, can create blisters and eruptions in the epidermis. If ingested, severe vomiting and endless diarrhoea can lead to death. If you are present while burning this plant, its smoke can cause temporary blindness and significant respiratory problems. 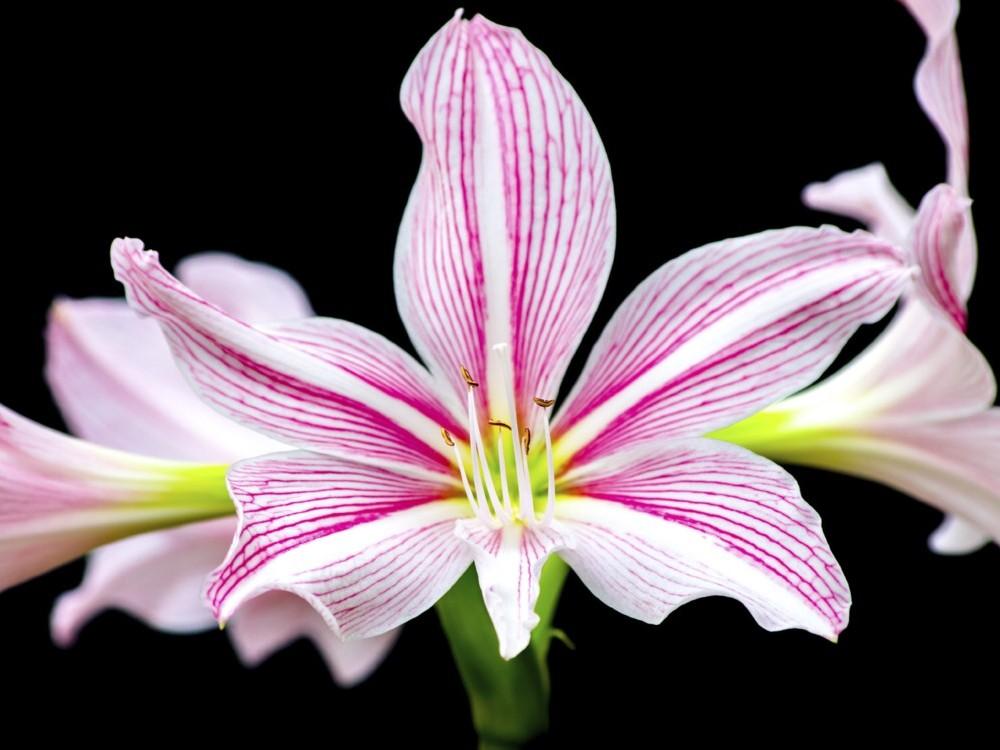 This beautiful shrub is native to Europe, North Africa, and West Asia. It is one of the best-known poisonous plants from ancient Egypt to the Middle Ages up until now. It is the ancient Egyptians they were responsible for promoting its use as a powerful narcotic.

The toxins responsible for its effects are atropine and scopolamine. In poorly administered doses it can affect the nervous system paralyzing even the nerve endings of involuntary muscles of the body such as the heart itself or blood vessels (which can lead to coma or death). Low doses can cause delusions and hallucinations. High doses of 10 to 20 berries are more than enough to kill a person. 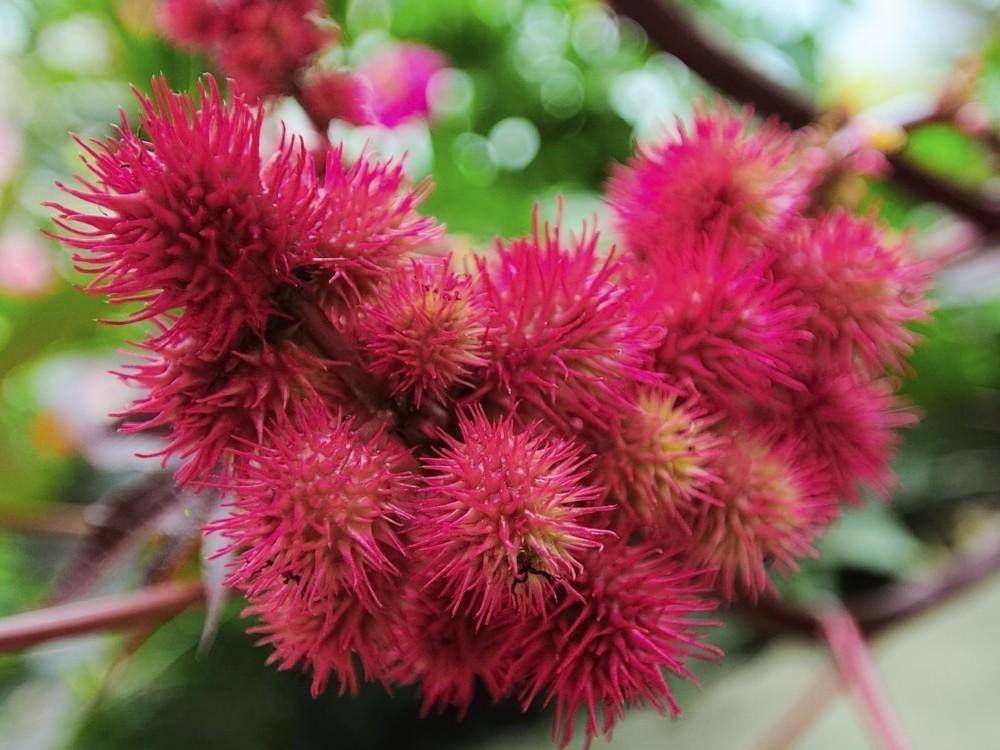 Ricin or the infernal fig tree is a bush native to Africa with a thick, woody stem, whose leaves may be red or dark purple (hence its common name) and is usually covered with a white powder, ricin, which is highly toxic. Contact with this substance causes nausea, abdominal cramps, vomiting, internal bleeding and kidney failure, resulting in death 10 days after contact. Ricin interferes with human cellular metabolism; by blocking the chemical process that sustains life, cells die and organs begin to fail little by little until death is provoked. A lethal dose for an adult would represent five castor beans; for a child, only one.

Castor oil is extracted from its seeds. 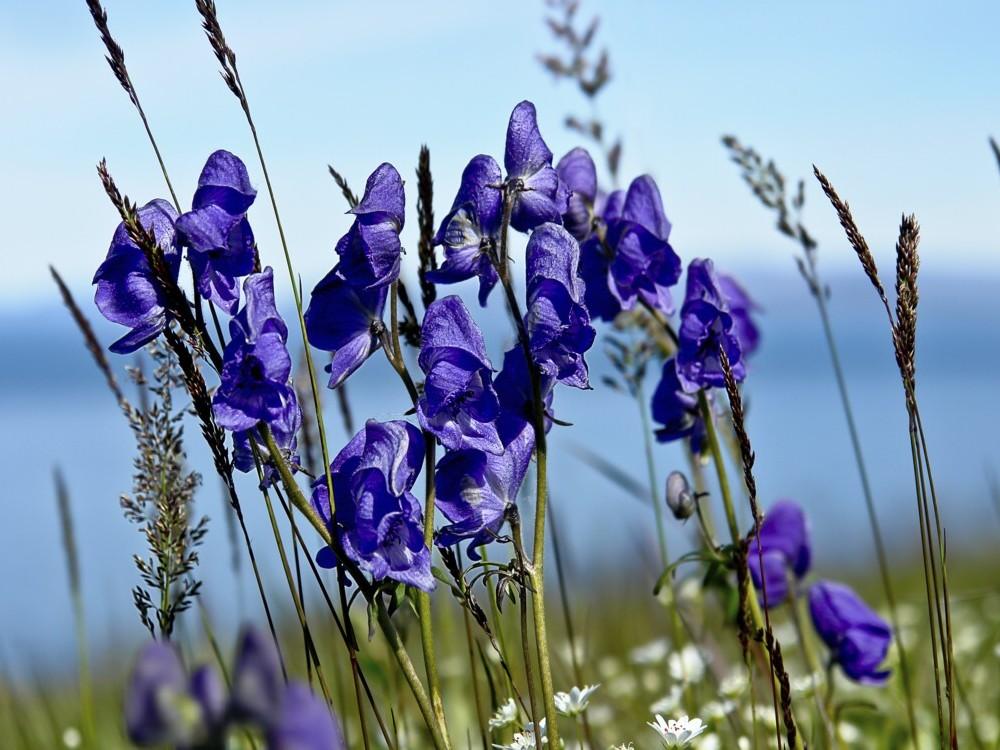 Also known as matalobos or devil's helmet, this herbaceous plant originates from mountainous areas of the northern hemisphere of the planet. It is a very poisonous plant (considered the most toxic in Europe) because it contains aconitin, one of the most active and toxic alkaloids that, after a slight contact, can slow the heart to death and just 1mg of this plant is enough to kill an adult of 80kgs. The symptoms that occur after touching or ingesting aconite are burns in the mouth, salivation, vomiting, diarrhoea, heart problems, coma and, in some cases, death. 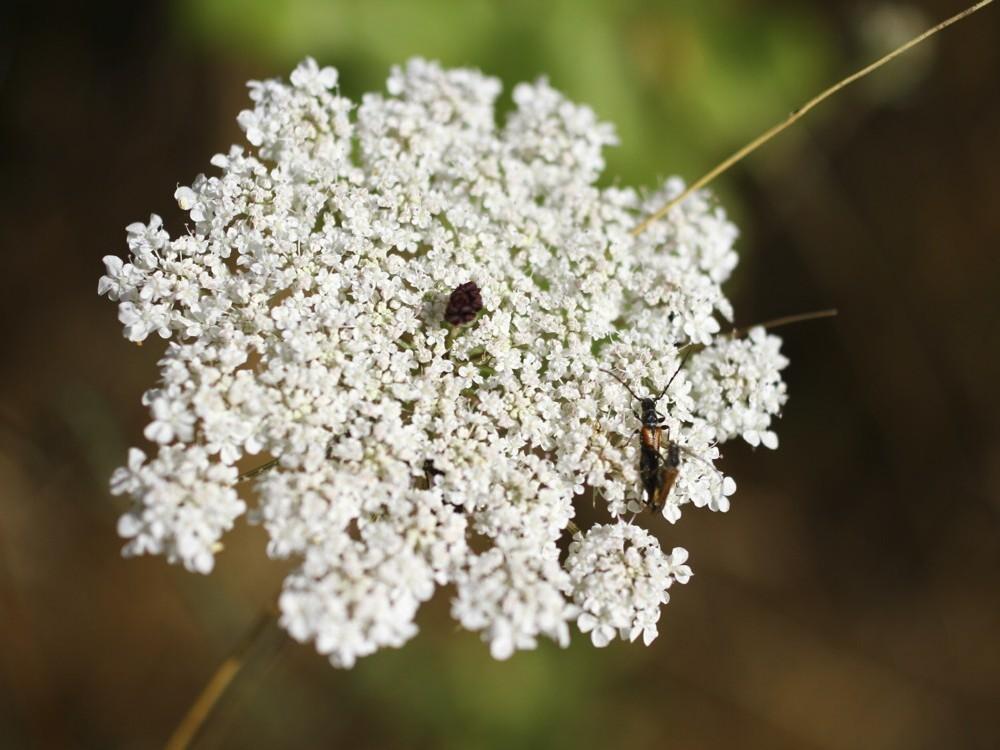 It grows in humid and cool environments (river banks, streams and on the edges of roads and fields); it is native to Europe and North Africa. This invasive species that can grow up to 2 meters high, contains all toxic substances such as cicutin that inhibits the functioning of the central nervous system producing the so-called "cicutism" (cyanosis, midriasis, convulsions and coma) that begins with vertigo, headaches, lower body temperature and reduction of muscle strength ending in paralysis. In order to kill a human being, only a few grams of its green fruits are necessary. The most famous historical figure who died after condemning him in a trial to drink a glass of hemlock, was the philosopher Socrates in 399 BC. 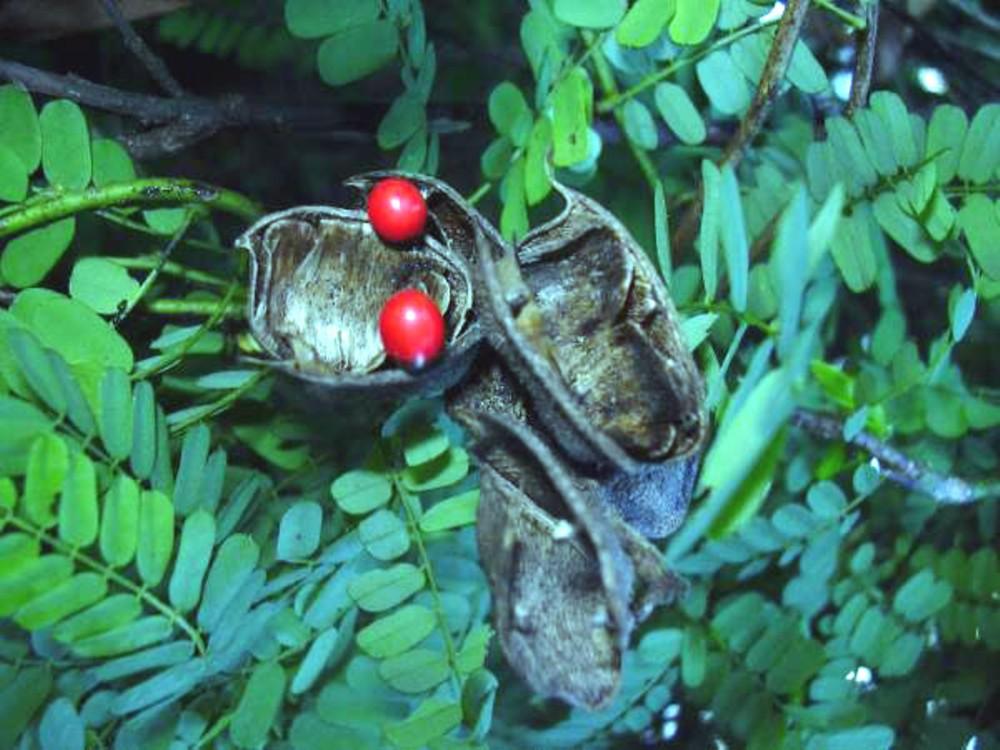 This is a species of climbing liana (originating in India and Indochina) that can reach up to 5 meters in length. Its flowers are grouped into clusters and are pink or reddish-purple. The toxin that makes this plant one of the most dangerous is the abrina, whose quality prevents the synthesis of proteins with astonishing speed. A single abrin molecule can paralyse up to 1,500 ribosomes per second and is 75 times more dangerous than ricin, the toxic substance is ricin. Only 3 micrograms of this substance are needed to kill a person and curiously the entire plant is toxic. In ancient times, this plant was used as an abortifacient or to eliminate intestinal parasites. 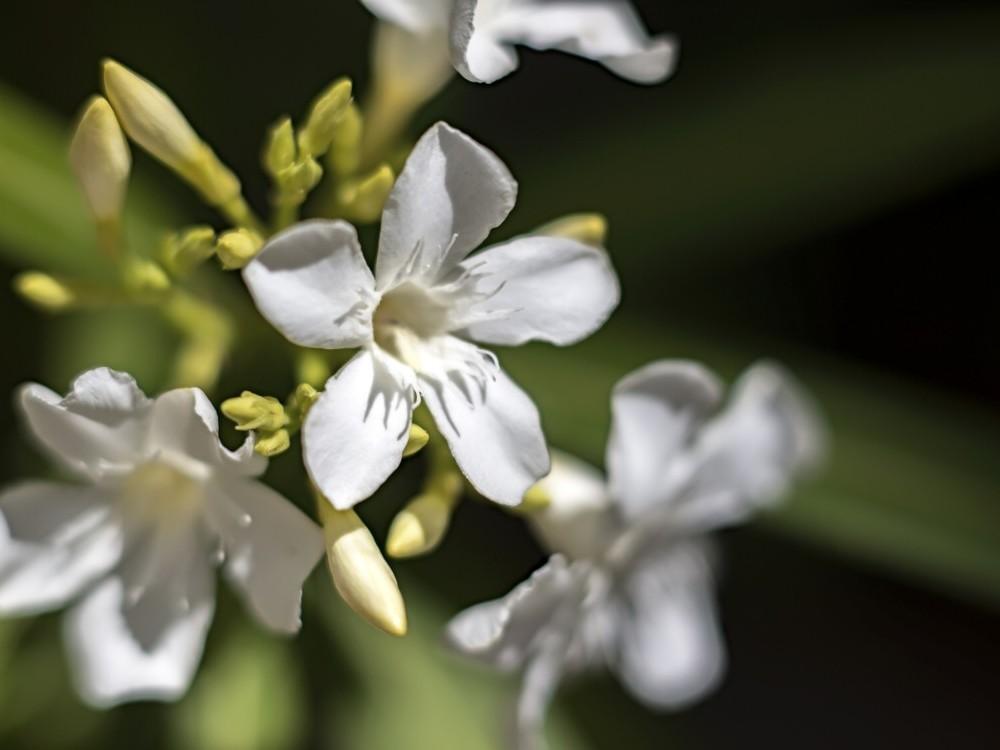 The oleander, also known as laurel of flower or trinitaria, is a shrub plant (of Mediterranean origin and therefore, resistant to droughts) with intensely green leaves and whose leaves, flowers, stems, branches and seeds are all highly poisonous, hence it is also known as "the most poisonous plant in the world". It takes first place because of its potent poison that contains several toxins (such as oleandrin) that act on the heart. The mistaken intake of this plant causes nausea, vomiting, vertigo, bowel movements, excitement and depression, convulsions, arrhythmias, tachycardias and finally cardiac arrest.

A historical fact: during the Spanish War of Independence (1808), a platoon of Napoleon's soldiers stopped to roast meat using oleander stakes found around the temporary camp. This caused 8 soldiers to die and the other four to be severely intoxicated. 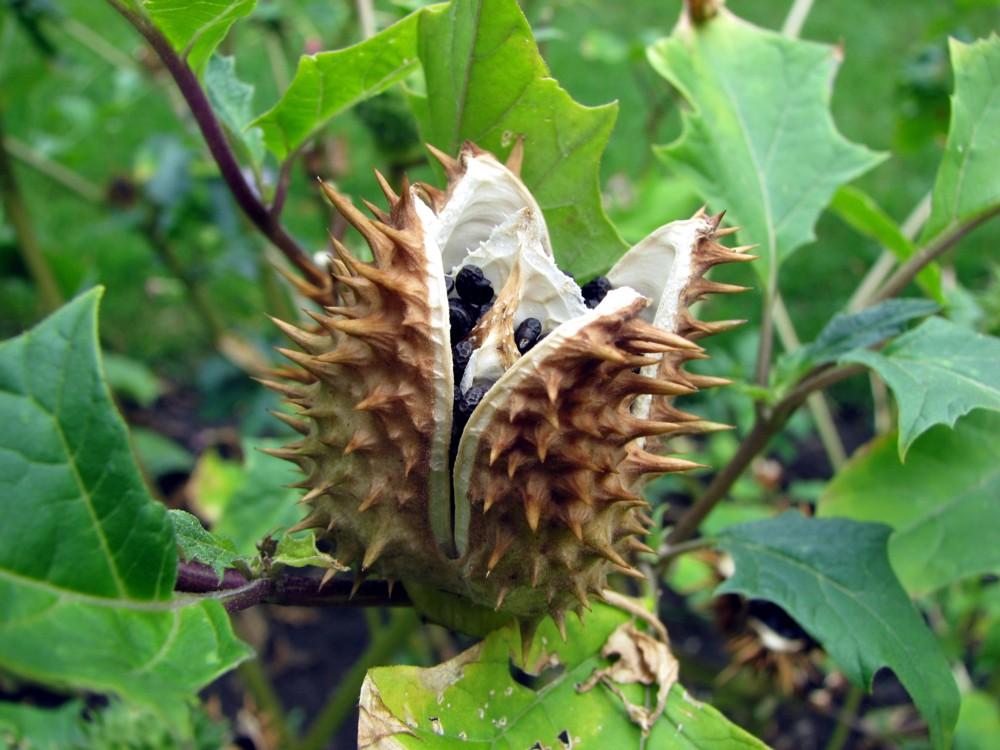 With hallucinogenic properties, this poisonous plant grows naturally in warm areas around the world; present on riverbanks, stables, dunghills or garbage dumps, this versatile plant is able to adapt to all types of soil. The toxic substances that characterize it are the tropical alkaloids (atropine and scopolamine). In high doses, they can cause aggressive behaviour, coma and even death.

Their association with voodoo and witchcraft comes because shamans used to smoke its leaves along with tobacco to enter a trance. A small dose of four or five grams of leaves is enough to kill a child. 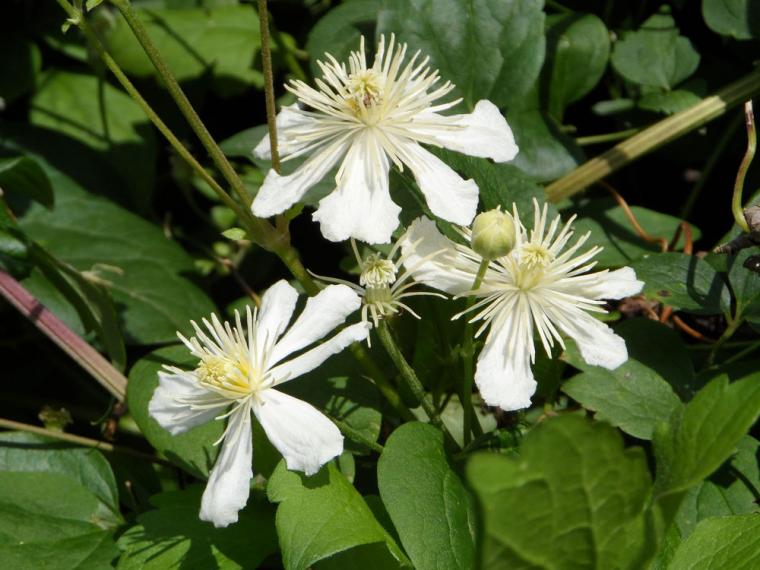 This spice was popularly called 'beggar's herb' because beggars rubbed themselves with the plant to provoke irritation and thus draw attention and transmit sorrow when begging. It is distributed throughout the Mediterranean region, west and central Europe. In Spain, this climbing plant is very common in the area of Asturias and part of León. The toxin that the plant contains, protoanemonin, can produce generalized intoxication for its absorption by means of the cutaneous (topical) route. If ingested, it causes gastroenteritis with diarrheal effusions, nausea, renal injury and even death from respiratory paralysis. 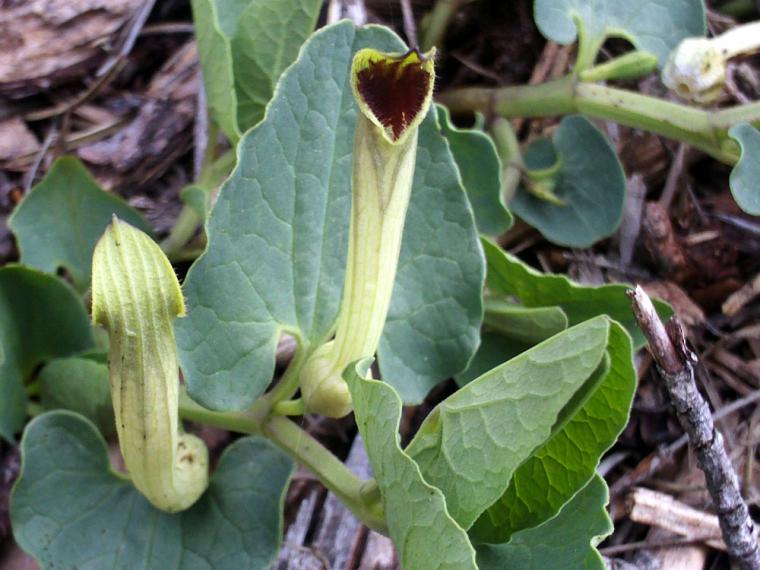 It was believed that its seeds calmed down symptoms of epilepsy, the possessed and also broke the spells that prevented a man from having sex with a certain woman. With a more stable scientific base, it is known to grow from February to June in areas close to a sea level of up to 1500 meters of altitude. In Spain it is present in different terrains. The particularity that makes it highly toxic and irritating is its aristolochic acid, which at high doses can produce respiratory paralysis. 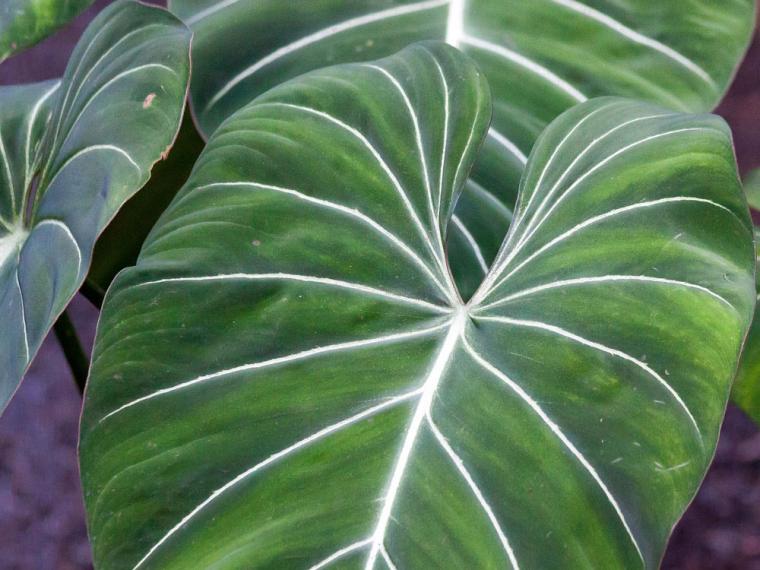 It’s one of the most popular houseplants, as it is attractive and easy to grow. The unknown problem with this plant is that it contains calcium oxalate crystals, which are toxic to humans and animals. The intake of philodendron causes dermatitis, swelling of the mouth and digestive tract in humans, but in cats and dogs, its effect can be more serious and cause spasms, convulsions, pain and swelling. 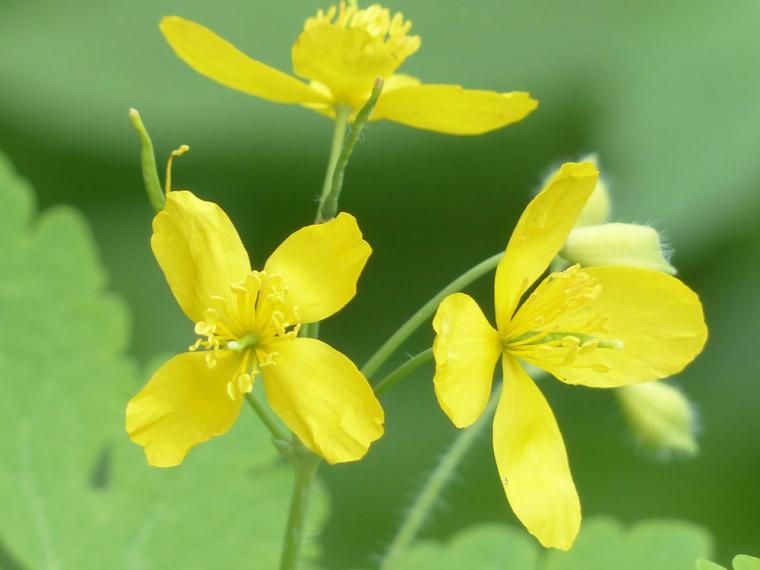 This particular plant inhabits in dry and shaded areas. Its scientific name, Chelidonium, means 'small swallow', as the flowering period coincides with the arrival of these birds. For this reason, it is also known as 'Herba de las golondrinas' or 'golondrinera'. It can cause narcosis, the paralysis of sensitive nerve endings, bradycardia and tetanus contractures. Its continuous administration is considered to be carcinogenic. 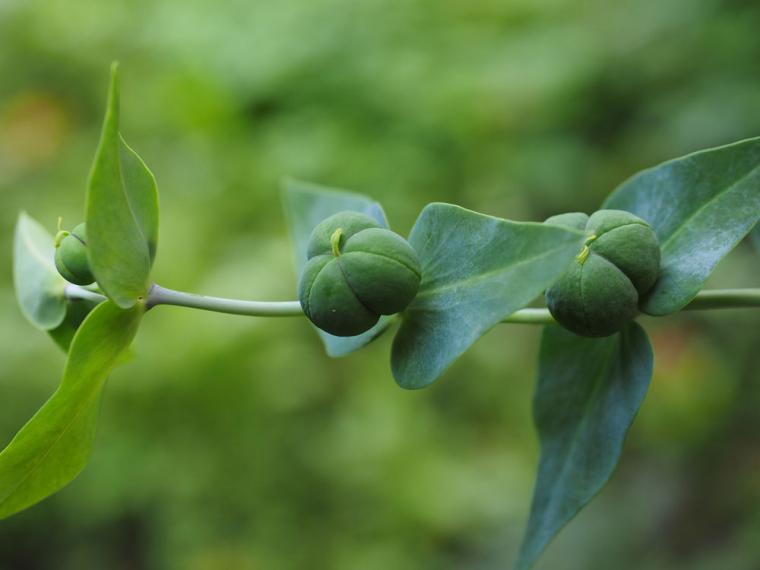 Although its exact origin is unknown, this plant is believed to come from Central Asia and China; and now it is widespread throughout the world. Its seeds have been used as a purgative in both human and veterinary medicine. Extreme caution must be exercised with the Tártago, as it is also an abortifacient plant (it can reject a pregnancy is one’s body). 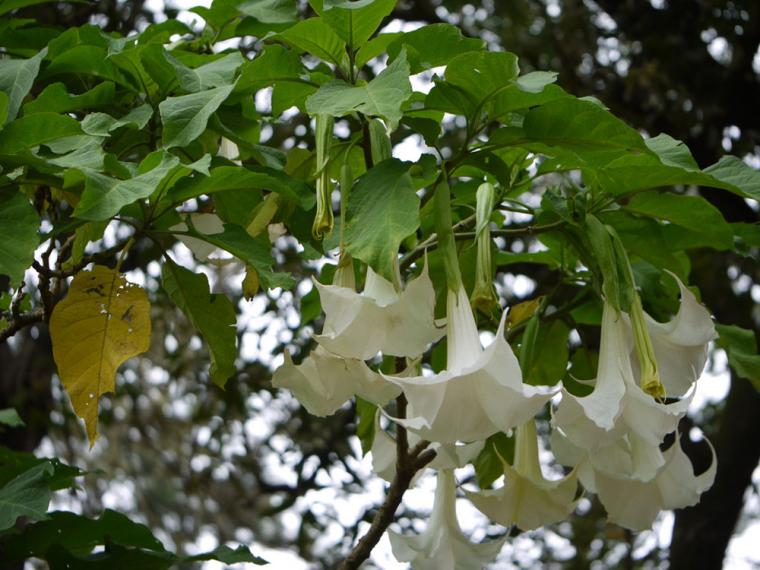 The floripondo has spread throughout Latin America and Europe and has been used as hallucinogens since time immemorial. It’s a small tree with elongated flowers that fall between 18 and 23 centimetres long. It contains tropical alkaloids, such as scopolamine, which are used in Parkinson's drug formulations. An overdose of these compounds can lead to paralysis, psychosis, hallucinations and also death. 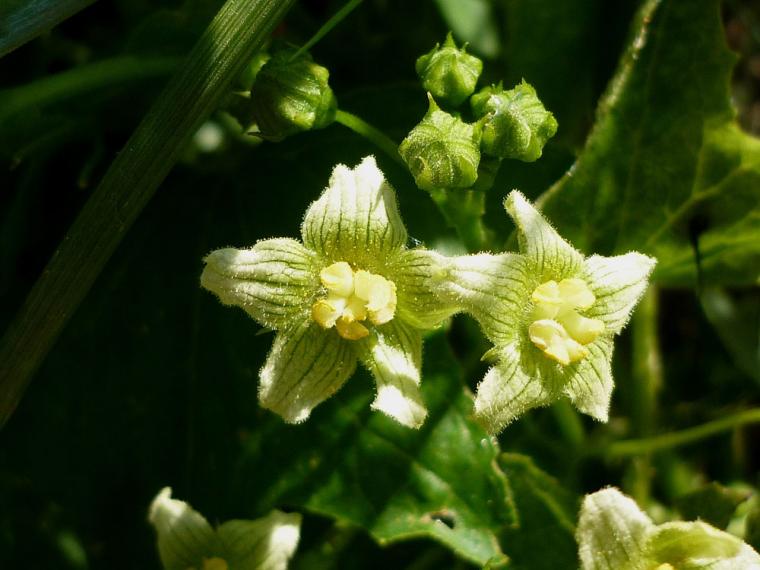 It is found in forest clearings, generally in southwestern Europe and northern Spain (especially from Leon to Asturias). Its sale to the public is restricted, although it is used in some medicines such as laxatives or topical anti-inflammatory drugs. The ingestion of Bryonia fruits, however, can cause gastrointestinal irritation, with vomiting, coleriform diarrhoea (symptoms similar to cholera), intestinal bleeding or nephritis (inflammation of the kidneys). In high doses this plant can cause death by cardio-respiratory collapse. 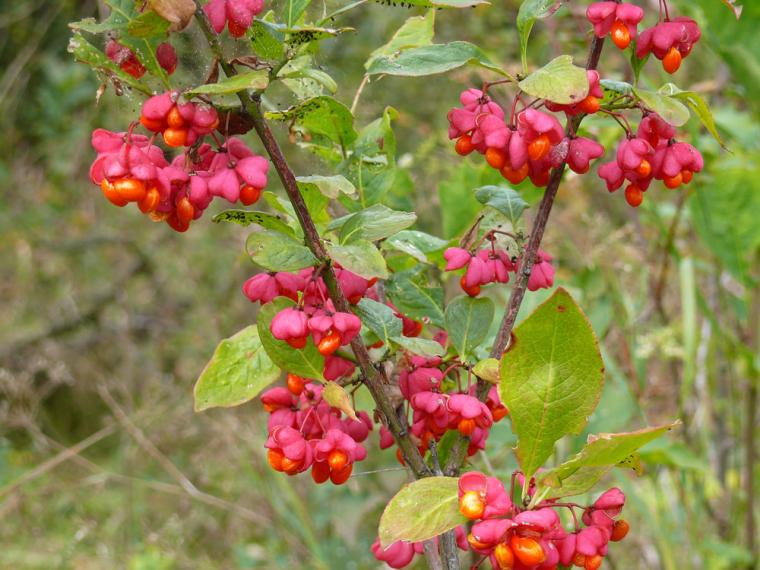 It is a deciduous shrub, between 2 and 3 meters high, which usually lives in generally fresh and deep soils. Its sale is prohibited due to its main active principle, evonine, which ingested in doses greater than 250mg, produces gastrointestinal colic (by its powerful purging action), bloody diarrhoea, general weakness, hallucinations, convulsions, loss of consciousness and syncopation, which can lead to death. 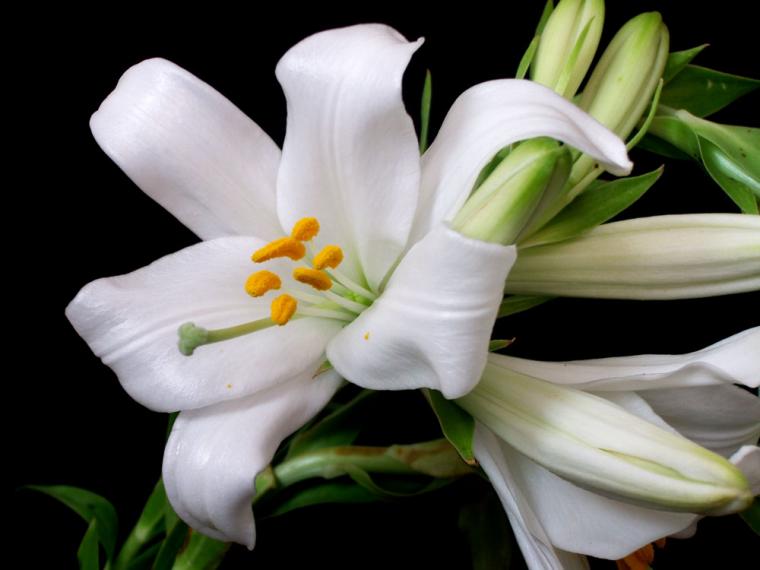 This herbaceous plant originates from Arab countries, but its extension allows us to find it in the rest of the continents of the world. Although it is used as a topical medication to cure ulcers, boils, burns, irritations, wounds, and inflammations, is extremely dangerous for cats, because for them their intake can be deadly. In fact, without immediate treatment, during the first hours after consumption, there is more than a 50% chance that the animal will not survive. 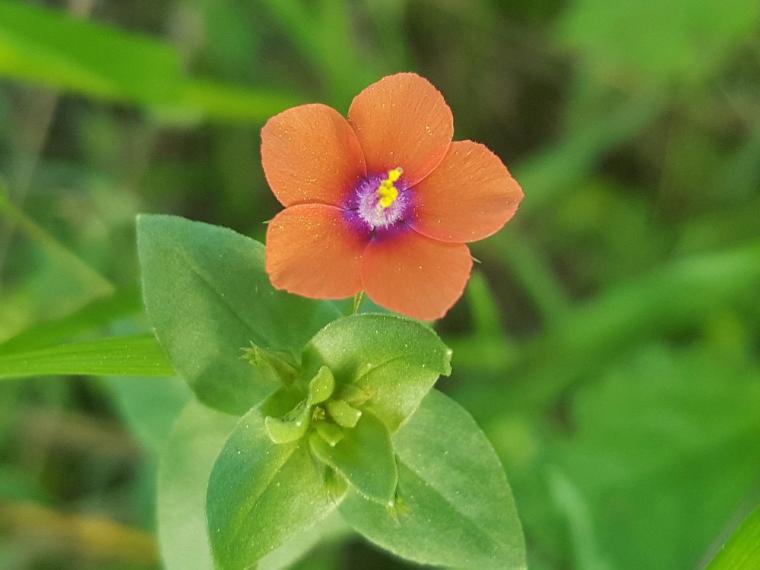 This plant was used in ancient times as a treatment for epilepsy and mental problems. However, it is currently not used because of its ineffectiveness and toxicity, among other reasons. The seeds are poisonous for mammals and the plant itself can cause contact dermatitis, as well as severe irritations in the intestinal mucosa. 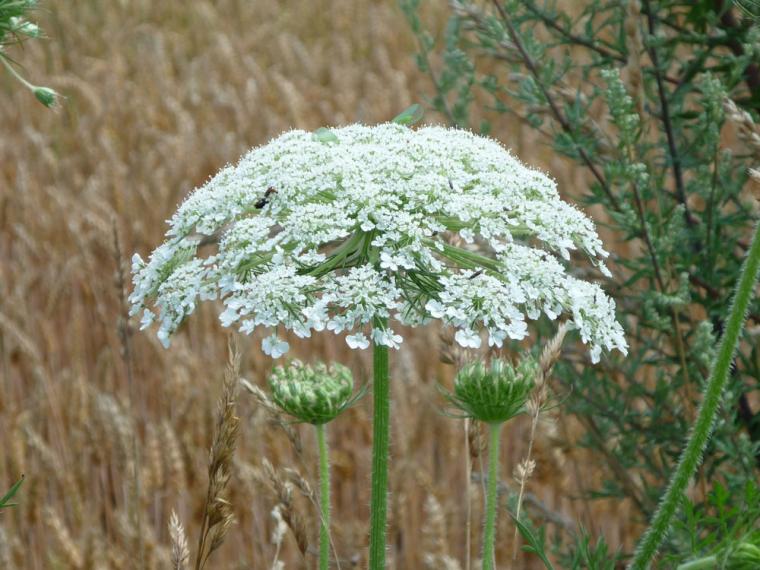 There are some cases in which the chemicals of certain plants come into contact with human skin and react to sunlight, causing burns. It is due to a careful phenomenon called phototoxicity. This is the case of Heracleum mantegazzianum. 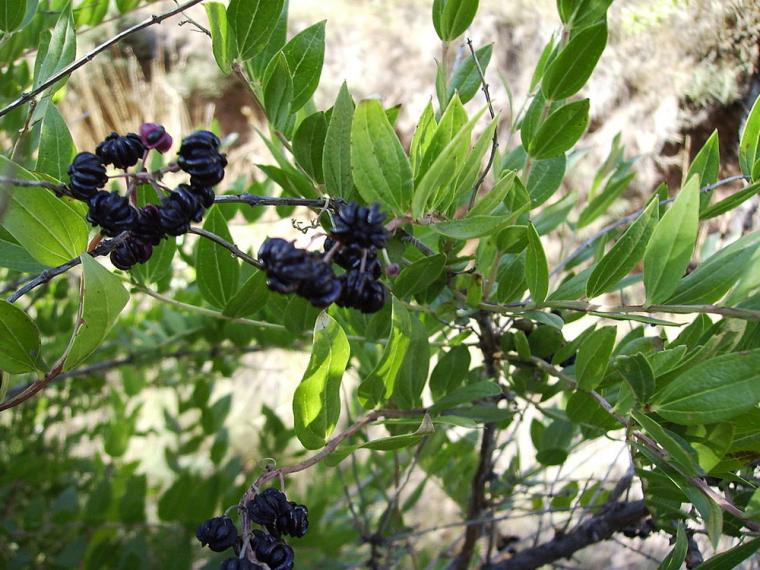 This species tends to be confused with the blackberry, this is why people are often intoxicated by this plant. The Roldón or 'Herba zapatera' has two toxic principles: coriarina, which is found mainly in the leaves, and coriamirtina, an excitant of the nervous system. After consumption, the person affected experiences nausea, vomiting, headaches and dizziness. Other symptoms such as convulsions and alterations of consciousness have also been described.