The most beautiful natural parks in the world

National parks represent a magnificent collection of high-contrast landscapes. In an exciting encounter with the best natural environments in the world, you can walk through magical forests, spectacular mountains, glaciers, lakes or volcanoes of incredible beauty. These are natural reserves that should be visited at least once in a lifetime.

The world's first national park was established in the United States, in Yellowstone. It was not intended to be a radical new idea of a young nation but was the 'best idea in America' despite just being a practical solution to a territorial argument. It was supposed to become a state park, but the land of Yellowstone park was placed in three territories at once of which none was a state yet. That's why the U.S. Congress decided to turn it into a federal park.

The National Park Service, now past its 100th anniversary, occupies 409 parks spread over 84 million acres in the 50 states, the District of Columbia, and U.S. territories. These areas include national parks, monuments, battlefields, military and historic parks, historic sites, picturesque rivers, coasts, recreation areas, trails, and even the White House.

The European Day of National Parks is celebrated every year on May 24, commemorating the declaration of the first European national park in Sweden on May 24, 1909, which aims to remember the key role of parks in the conservation of nature and the opportunities they offer us for social welfare. 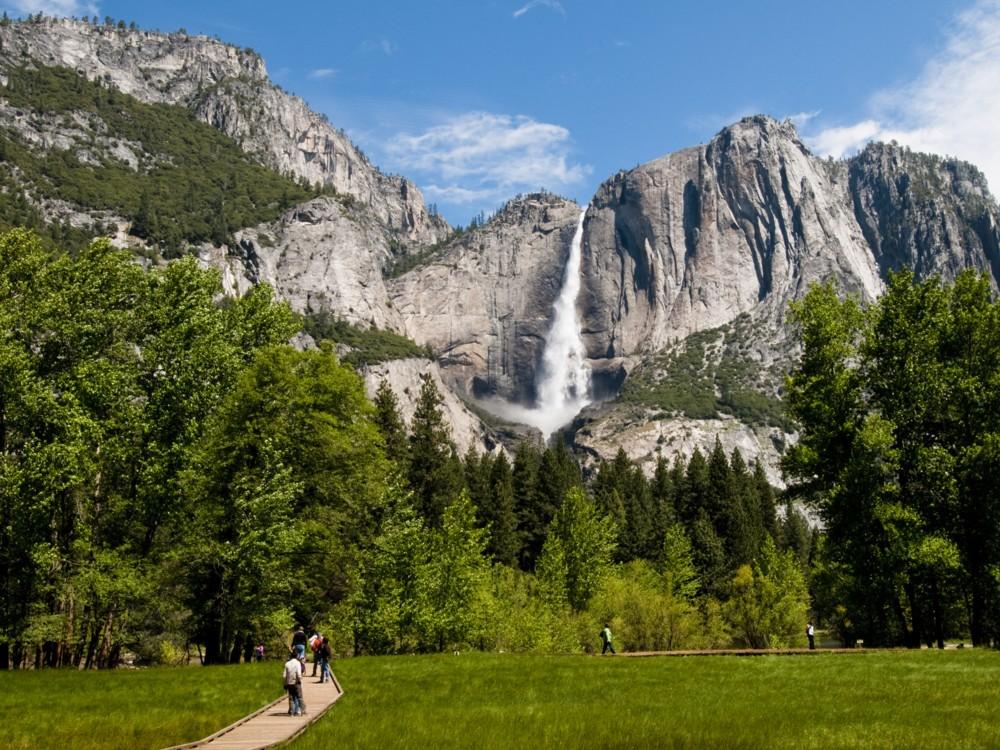 Although Yosemite National Park is located in central California it is well known for its huge waterfalls, granite cliffs and giant sequoia forests. It’s a park that doesn't go unnoticed. One of the best times to visit is in the fall. The foliage in this season approaches its peak at the end of October and continues until November: maples, dogwoods, poplars and oaks decorate the landscape.There are also bison, lynx, grey wolves, mountain goats and black bears.

Location: In the Sierra Nevada Mountains of California, United States. 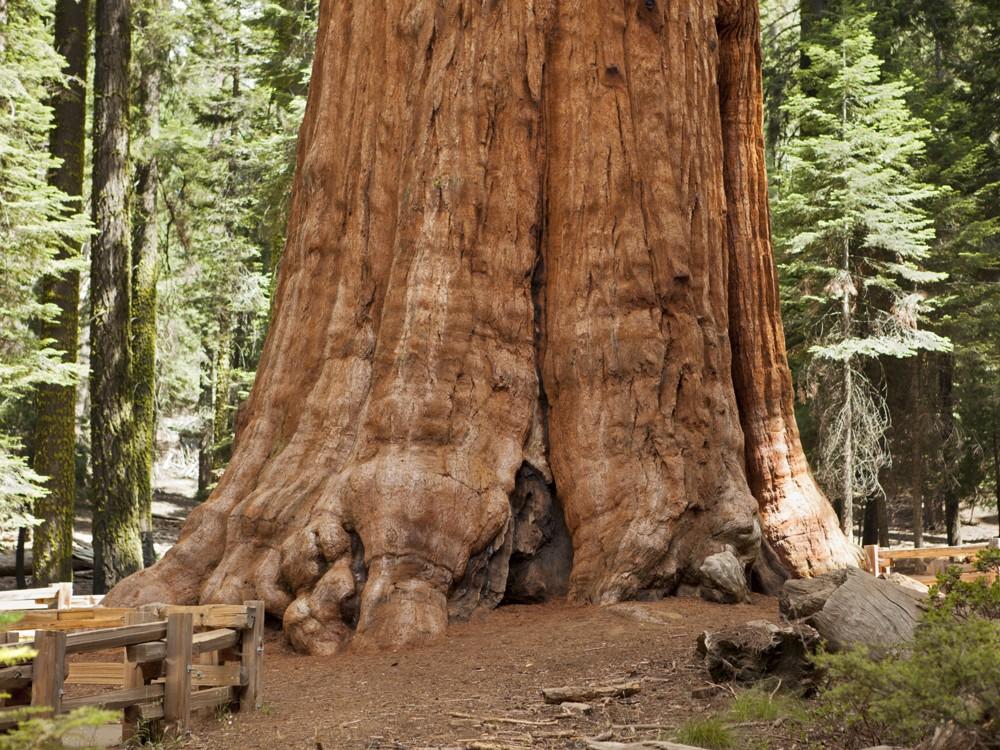 It can be found next to the Cañón de los Reyes National Park, in the Sierra Nevada mountains of Southern California. There we will find the most majestic sequoias, that rise as much as if buildings of more than 25 floors were treated. These giant sequoias form a unique landscape, they are 80 metres tall, counting from the ground up and can resist storms, felling and fires. The famous General Sherman, the largest living sequoia on the planet, is 84 metres in height and weighs 1.9 million kilograms.

Spanning nearly 25,000 square kilometres in the interior of Alaska, Denali National Park and Reserve is the perfect destination for mountaineers, backpackers and, of course, tree/leaf watchers. At the Denali National Park, autumn peaks in late August and early September, where you'll see a good sample of deciduous trees; including poplars and willows, as well as shrubs and flowering plants that make up an incredibly colourful landscape in this protected area. The park is home to several species of wild animals such as grey bears, moose or wolves. 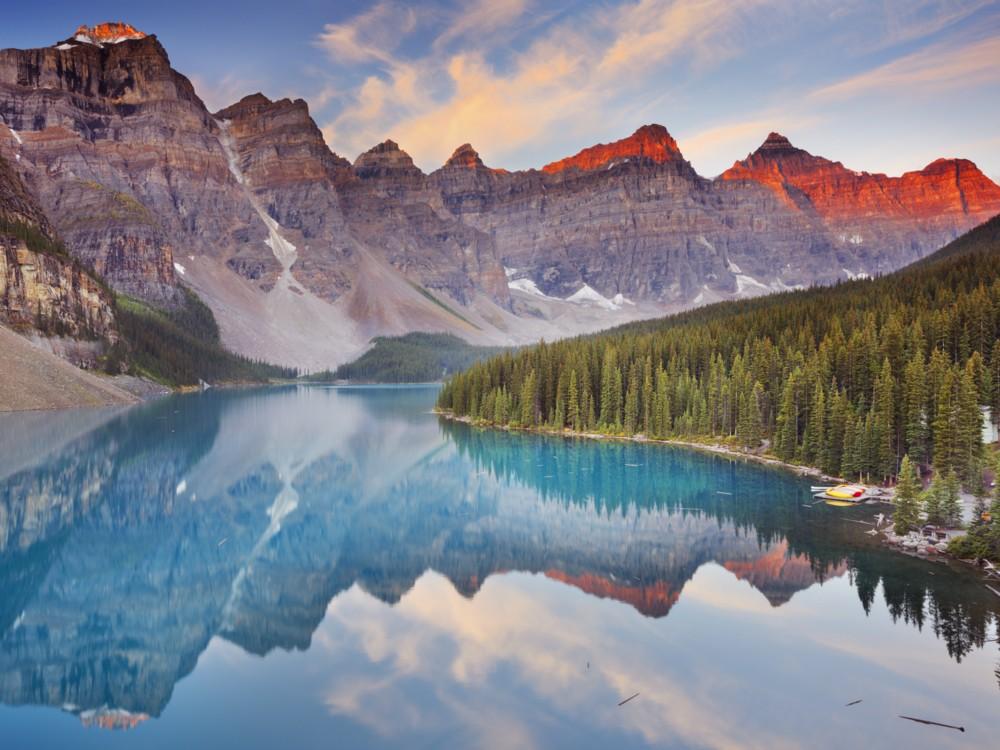 It is the oldest national park in Canada. With its glaciers, ice fields and coniferous forests, this national park has a special charm. With the reflection of the mountains adorning Moraine, Louise and Minnewanka Lakes, the feeling of freedom and happiness in seeing this beauty with your own eyes will make you never forget this stop on the way. The park is part of the Canadian Rocky Mountain Parks Natural Complex, declared a UNESCO World Heritage Site in 1984. 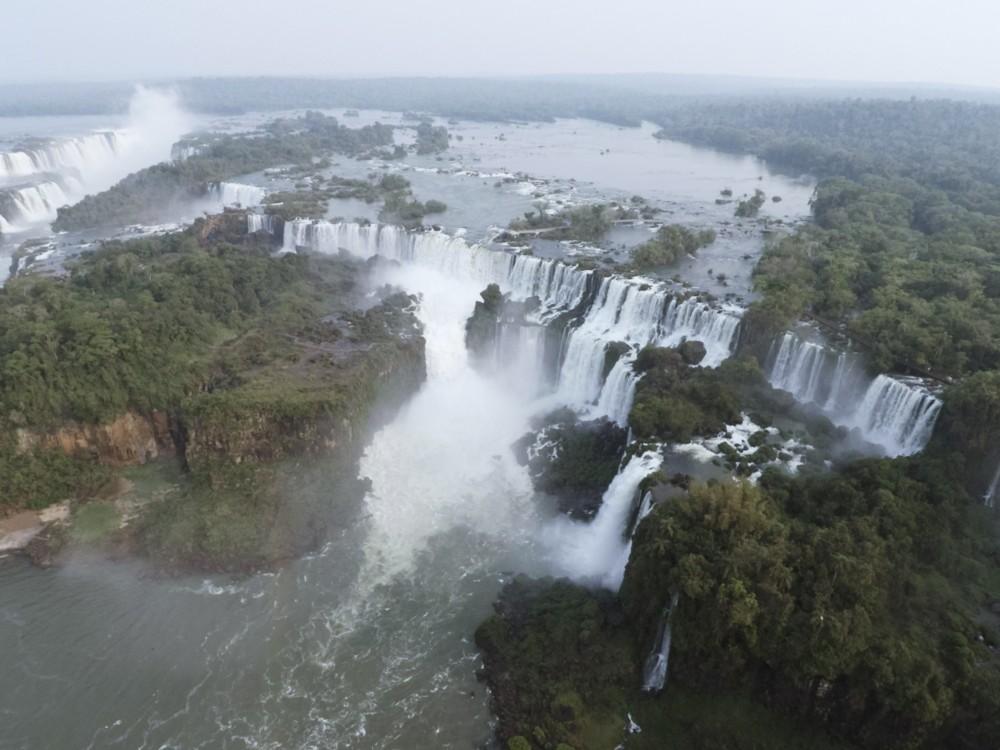 Famous for its impressive Iguazu Falls and one of the 7 natural wonders of the world, also housed falls that reach the height of 70 meters in the shape of a half moon. Apart from its waters, we can also observe jaguars, toucans or coatis. 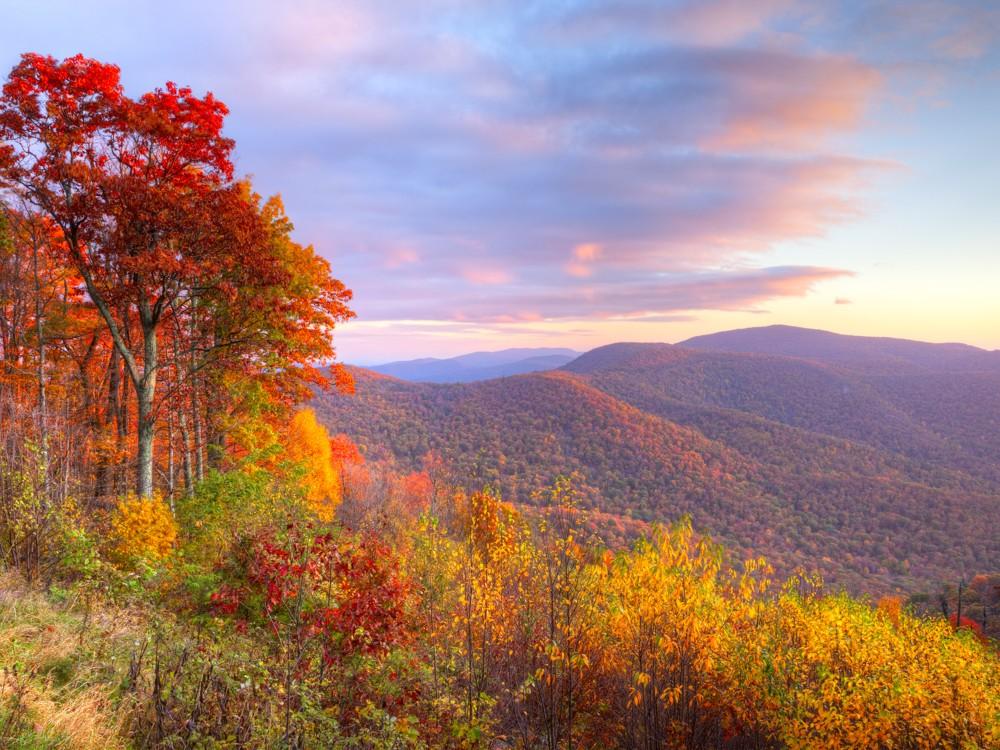 This Virginia (U.S.) park is home to a variety of deciduous trees including maples, birches, oaks, poplars and holm oaks. If you want to see the splendor of the fall leaves (with multiple shades of red, orange and yellow), the best time is mid-October. It is advisable to tour the entire park through Skyline Drive. It's a very busy park, as about 2 million people pass through this winding scenery each year. 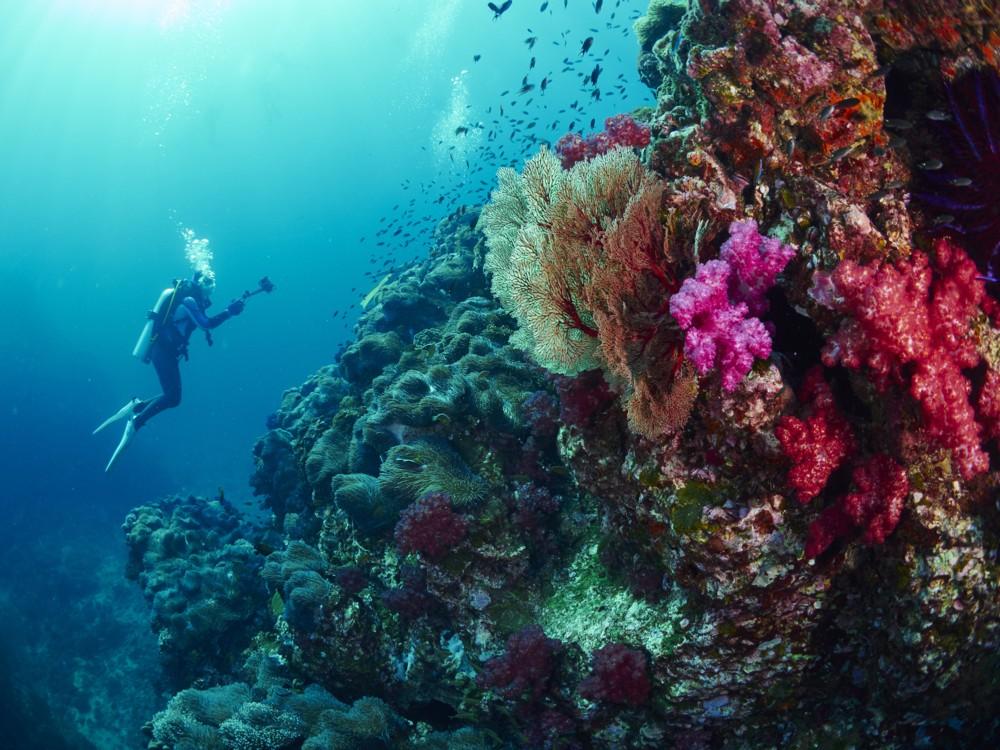 The Similan Islands National Park is located in Southern Thailand. The average temperature throughout the year is 27 °C but, despite this, the authorities always close the park from 16 May to 14 November due to the tremendous storms of the monsoon season, which can endanger its many tourists lives. It is made up of 11 islands and is considered one of the most beautiful natural parks in the world, with its spectacular white sandy beaches, crystal clear waters and magical coral reefs. Snorkeling or scuba diving are among the activities preferred by visitors. 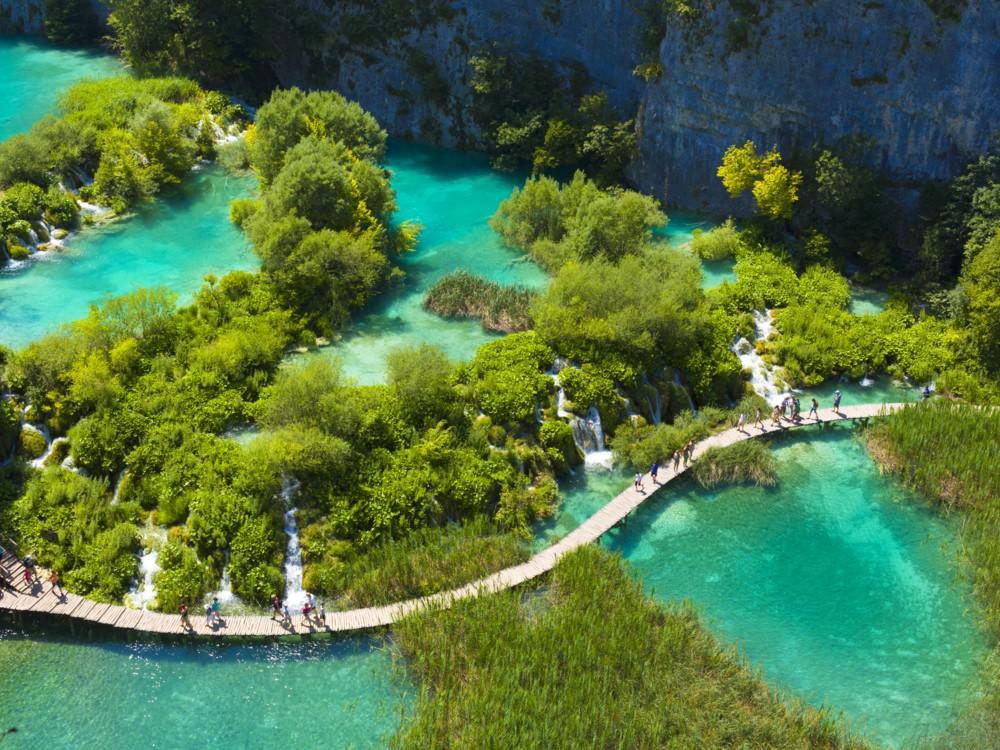 Among precious firs, beeches and pines, we also find up to 16 fabulous lakes connected by waterfalls and springs everywhere. If we travel to this nature reserve in Croatia, we should not miss the route of an electric boat that travels the 12 upper lakes with the 4 lower, with a final apotheosis: the 78 meter high waterfall Veliki Slap. 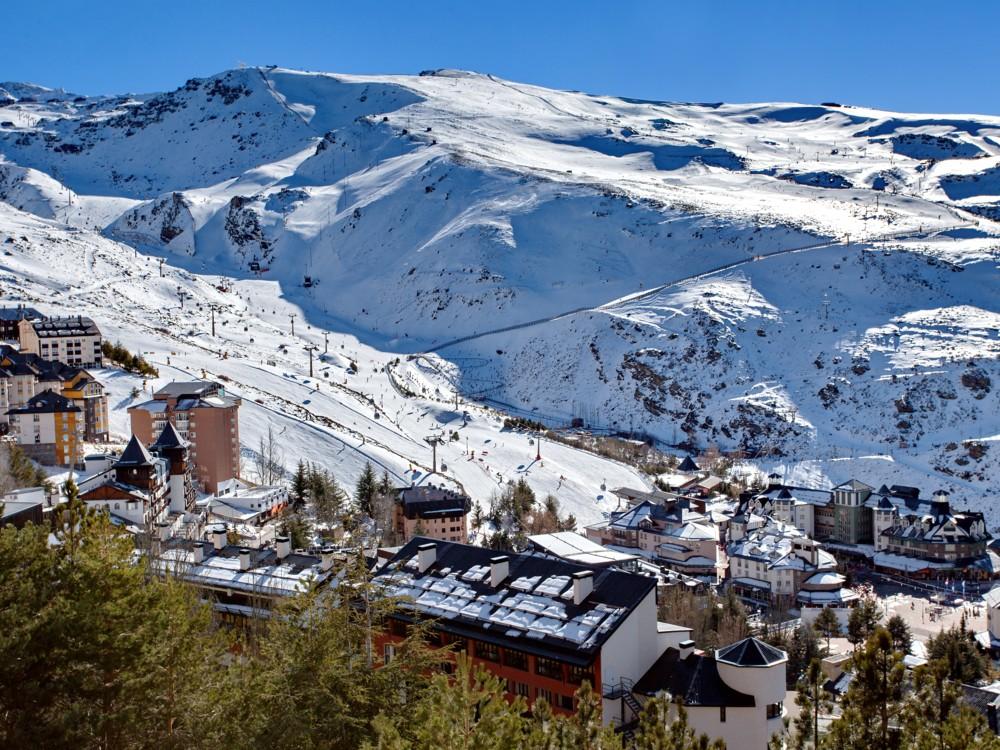 This vast park, the largest in Spain, stretches 850 km2 south of Granada to the beautiful valleys of the Alpujarras, with more than 20 peaks over 3,000 meters. Trekking or mountain biking are some of the most common activities alongside skiing, which we can practice from late November to late April. With spectacular mountains, whose peaks can exceed 3,000 metres, Sierra Nevada is also home to wild goats, badgers and wildcats. 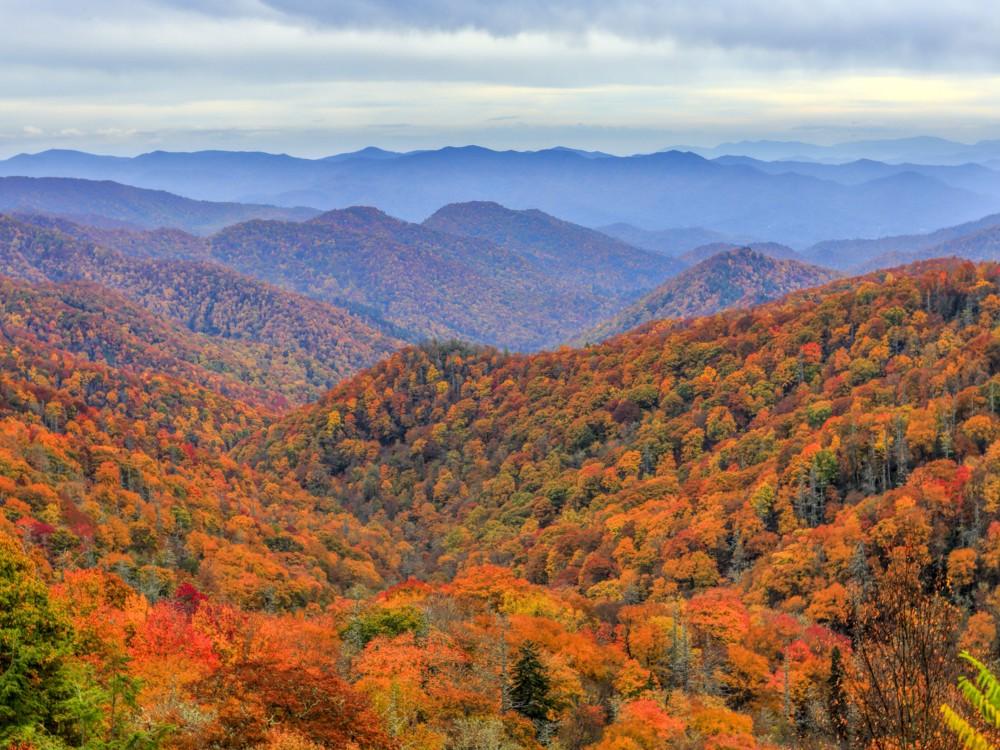 This national park is a division of the Appalachian Mountains located in Tennessee. It is, without a doubt, the most visited national park in the United States, and for good reason. Autumn colors come in descending waves. Trees at the highest elevations of the mountains (1,200 meters or more) begin to exhibit orange, red and yellow foliage in early or mid-October, while medium and low elevations remain relatively green until late October and early November. 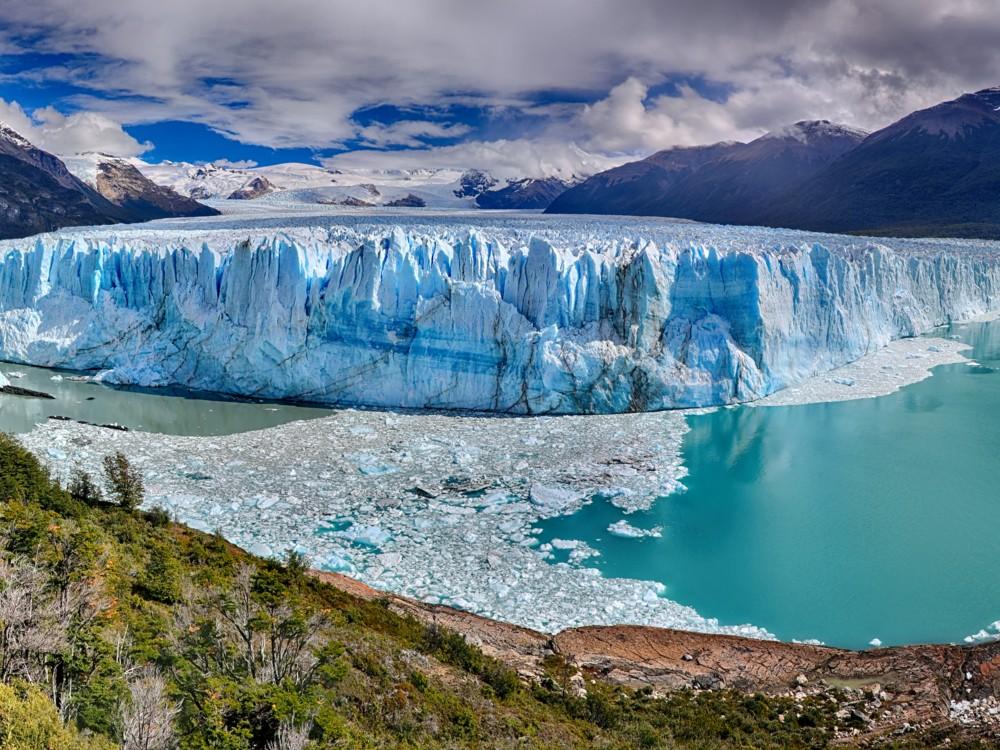 In total there are 47 glaciers in this park located in the southern Andes, in Argentina. It has been a World Heritage Site since 1981. 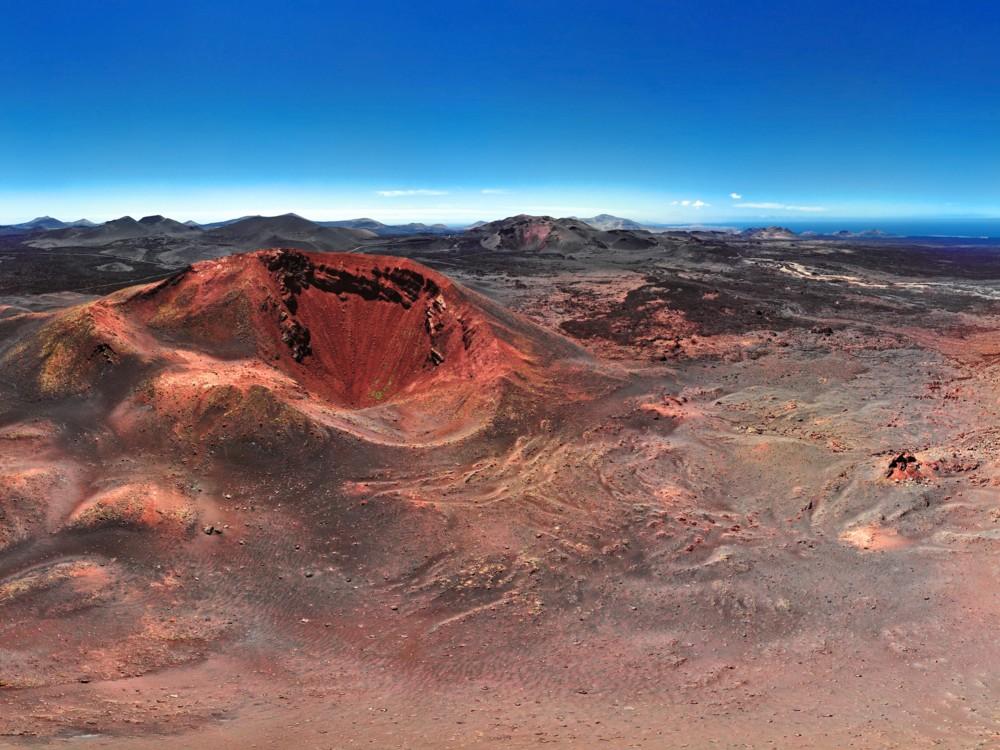 As if we were travelling to Mars, the Timanfaya National Park in Lanzarote has more than 20 volcanoes. This area of the Canary Islands offers an impressive landscape of lava and craters. Among the most outstanding volcanoes of this canary spot are: the Fire Mountains, the Rajada Mountain or the Caldera del Corazoncillo.

Mount Rainier National Park, located at the northernmost point of the Waterfall Range in northwestern Washington, begins to explode with autumnal colours around August and September, along with other high altitude parks (such as Denali National Park). This park is also home to Mount Rainier, a massive stratovolcano that reaches more than 4,000 meters on its summit, a popular place for walking and climbing. 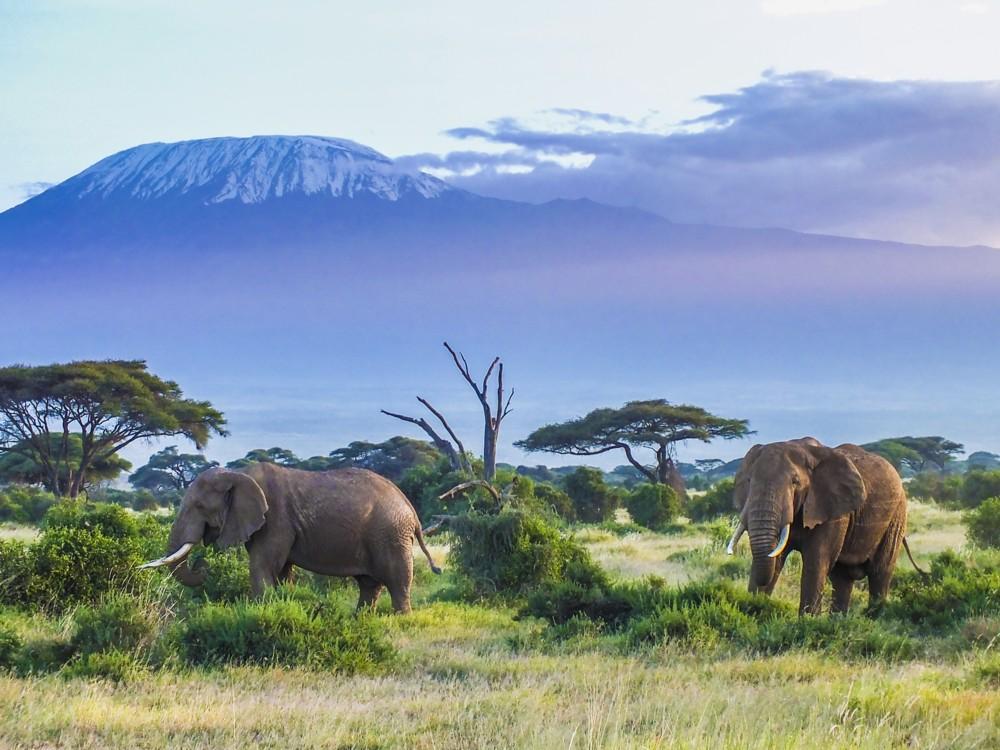 This park is located in southern Kenya. In it we can see all the variables of the African savannah with its plains, its marshes, its rocky areas or its acacia forests. Safaris are very common, whether you want to see elephant herds, giraffes or zebras. 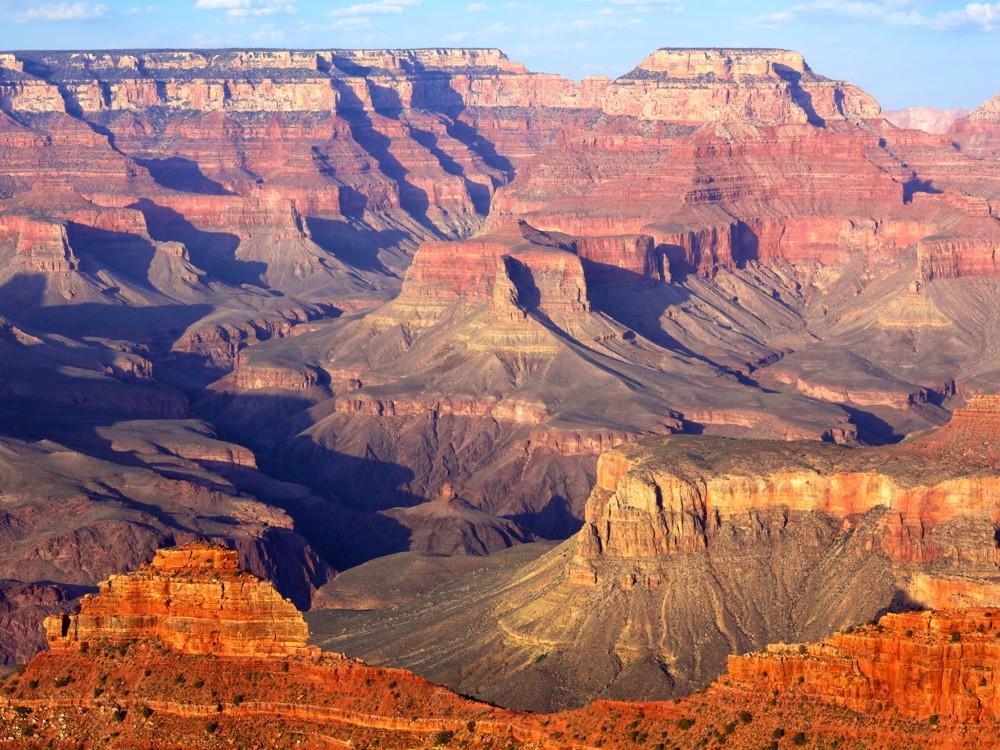 We now travel to Arizona where one of the most impressive natural monuments in the world is located: the Grand Canyon of Colorado National Park. Its characteristic red rock layers reveal millions of years of geological history, accompanied by whitewater rapids and panoramic views that will leave you speechless. 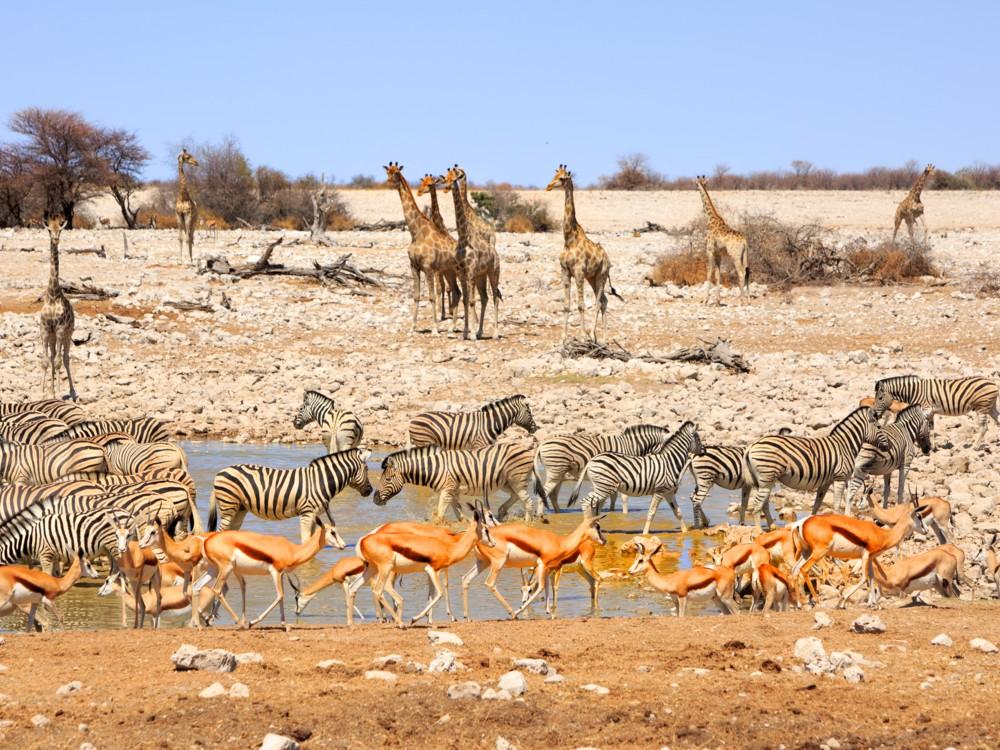 Is one of the largest national parks in the world with an area of more than 22,000 square kilometres. It is located in Namibia, where the Etosha plain includes one of the most biodiverse reserves in Africa. 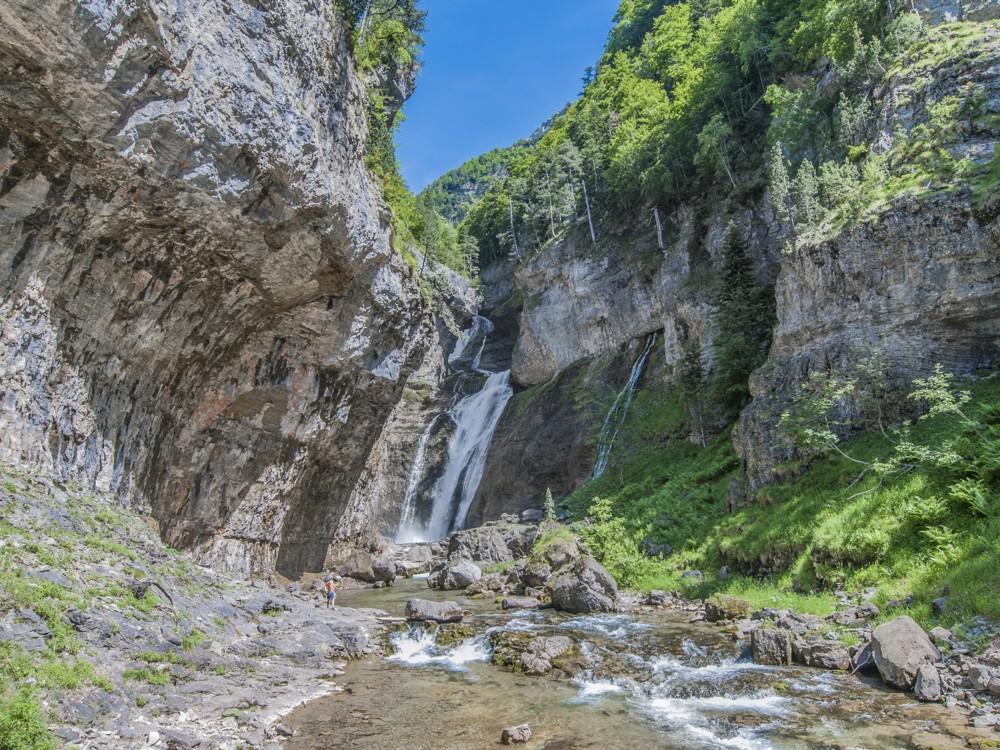 Near the French border is Spain's oldest national park (1918) but also one of the least known. The 3,355 meters of Monte Perdido hover over dramatic glacial valleys up to 3 kilometers deep. There are hikes for all levels, including trails along the natural shelves of limestone barely a metre wide. 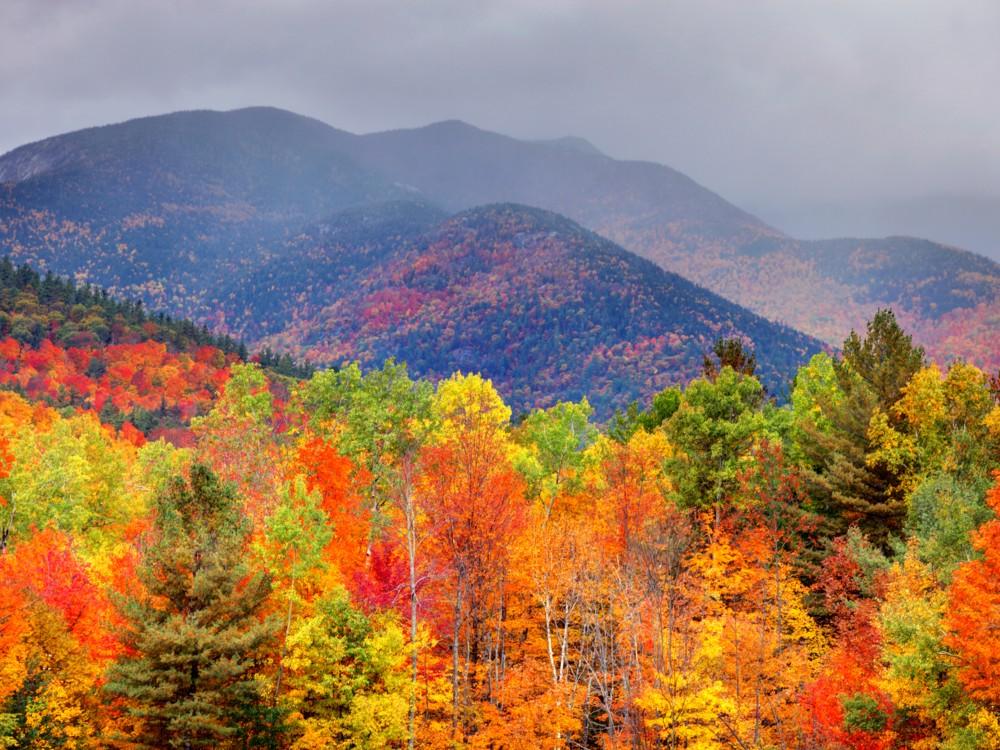 Covering more than 24,000 square kilometres in New York State, Adirondack Park is the largest protected area in the contiguous United States. It contains 3,000 lakes, many canals and hiking trails. Because of its cold weather, fall colours usually reach their peak in the last two weeks of September. 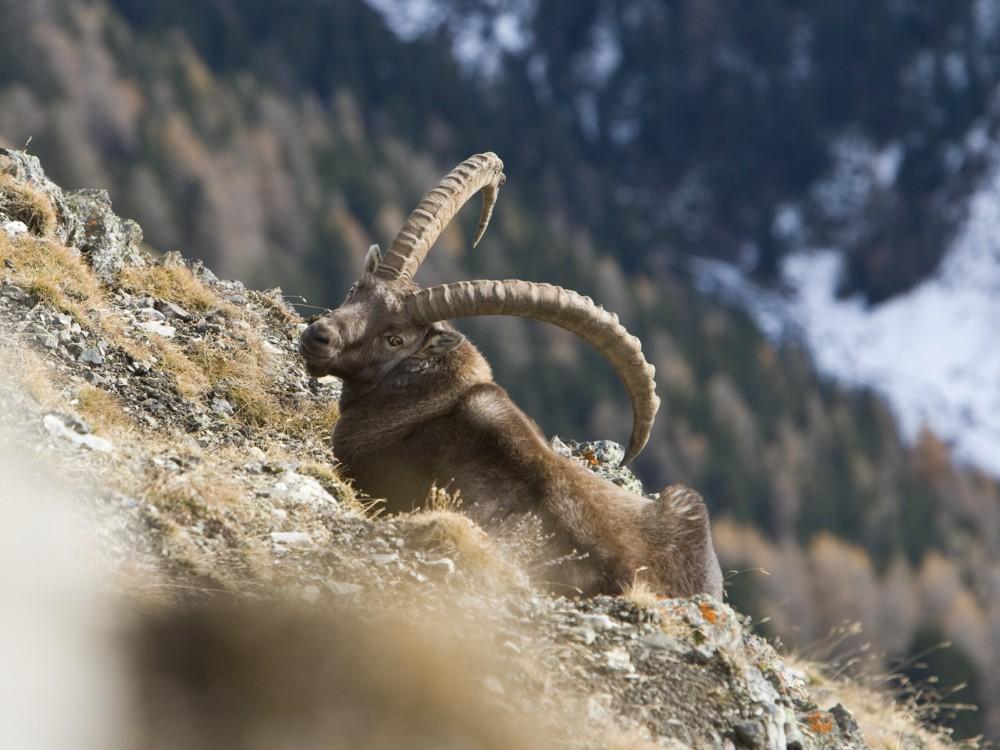 It has the honour of being the largest protected area in Switzerland and one of the first national parks in Europe. It was created on August 1 in 1914, a national holiday in Switzerland. 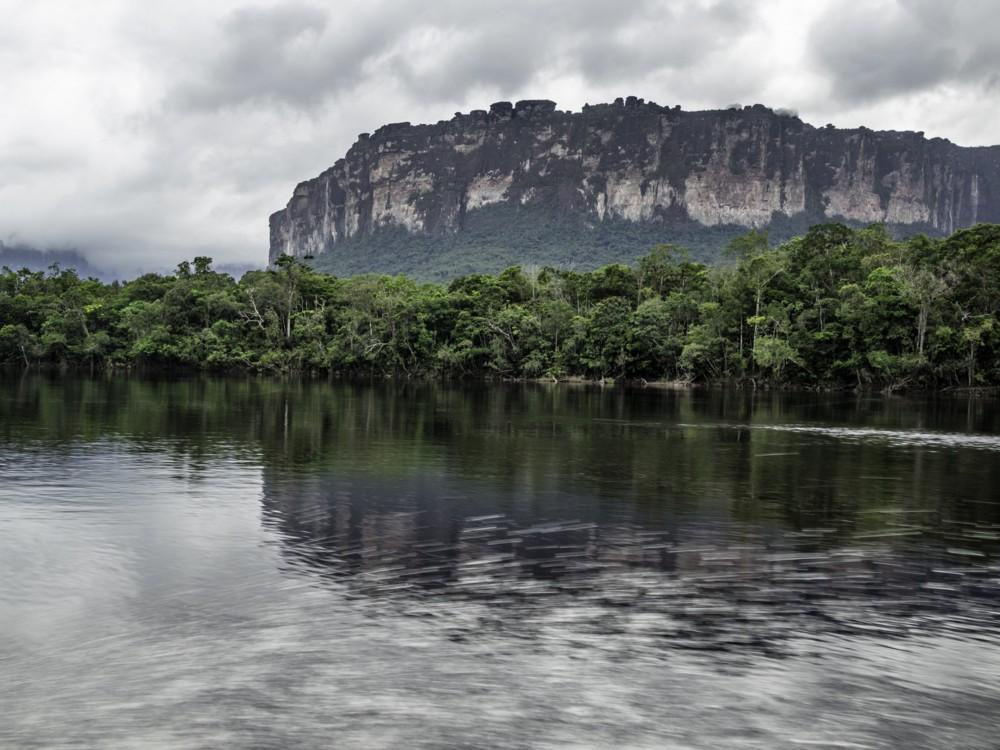 Located northwest of Boulder, Colorado, Rocky Mountain National Park is the perfect destination for observing the beauty of tree leaves, especially in the fall, as they have colourful foliage in this season. Much of the park is made up of evergreens, but deciduous trees, such as aspens, abound. 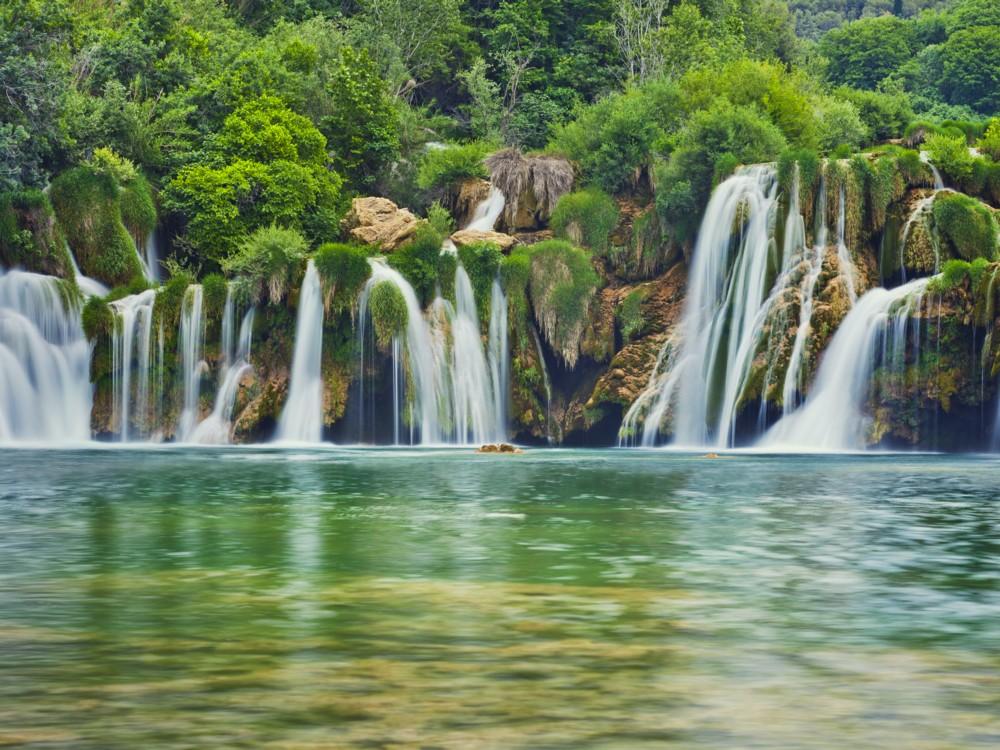 The area of the basin and the Krka river course, which extends for about 109 square km, was declared a National Park in 1985. The course of the Croatian river is channelled through a canyon, jumps seven waterfalls and ends in several lakes next to which can be found monasteries, water mills and remains of fortresses. 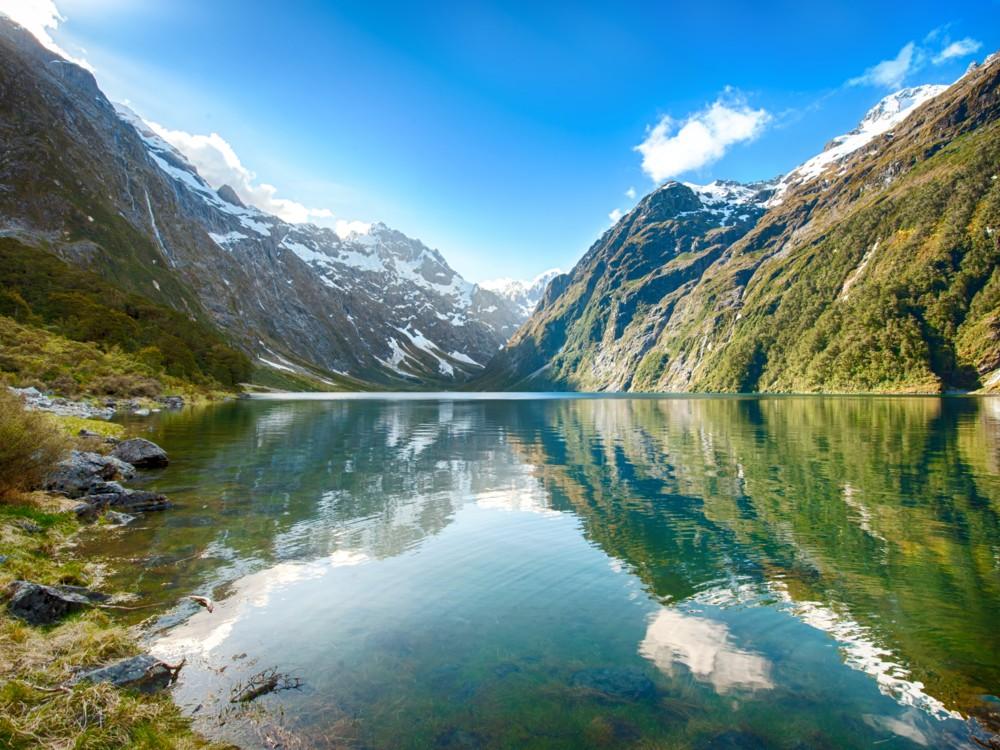 It is the largest of New Zealand's 14 national parks, covering an area of 12,500 square kilometres. Spectacular fjords, glaciers and peaks that exceed 2,500 meters of altitude await us in this park. 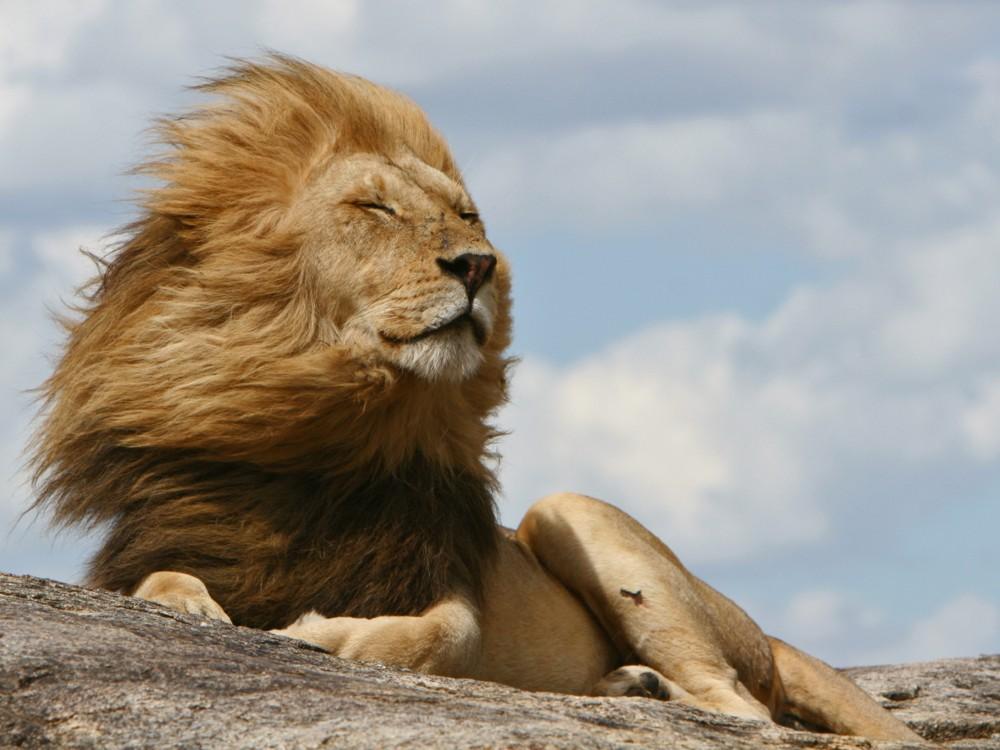 Steven Spielberg could have shot his emblematic film "Jurassic Park" perfectly in this national park. The erosion of the mountain has created an area full of cliffs that rise up to 2 km from the floor of the caldera. Waterfalls that end in these cliffs and streams that cross pine forests canary, no doubt this is a spectacular park to walk. In addition, the limited light pollution of the area explains the presence of the Roque de los Muchachos Observatory. 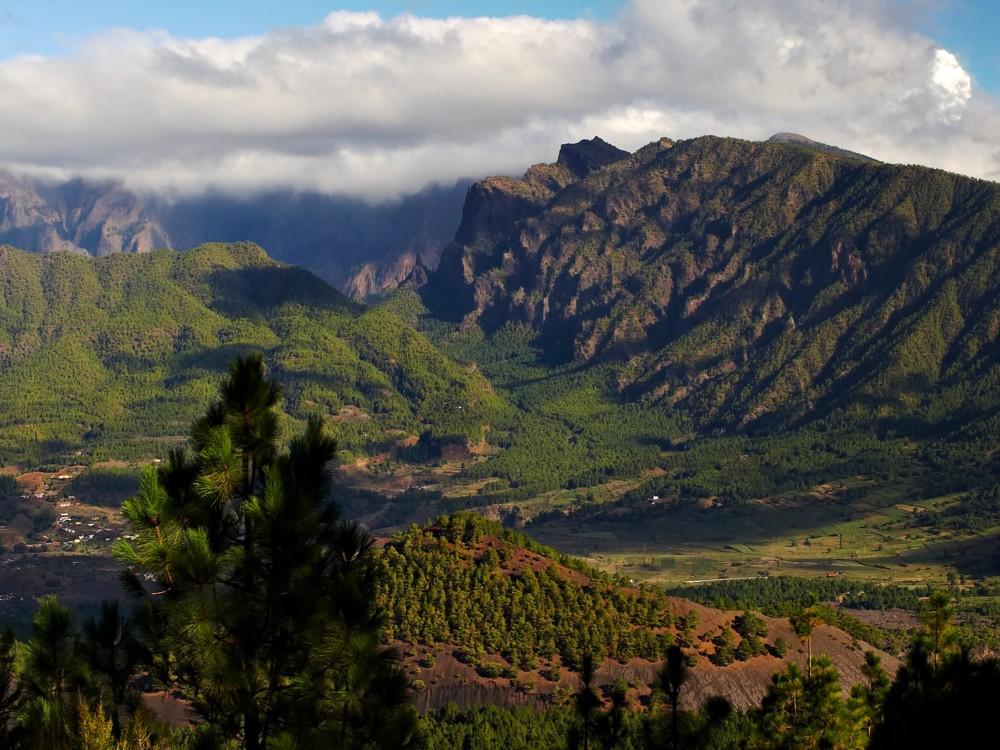 It is one of the largest and most important national parks in Chile. Another spectacular national park is located in Chilean Patagonia. There we will find glaciers, forests, beautiful lakes, prairies and mountains of unparalleled beauty in which the Cuernos del Paine and Lake Pehoé are two of the major attractions of this Biosphere Reserve since 1978. 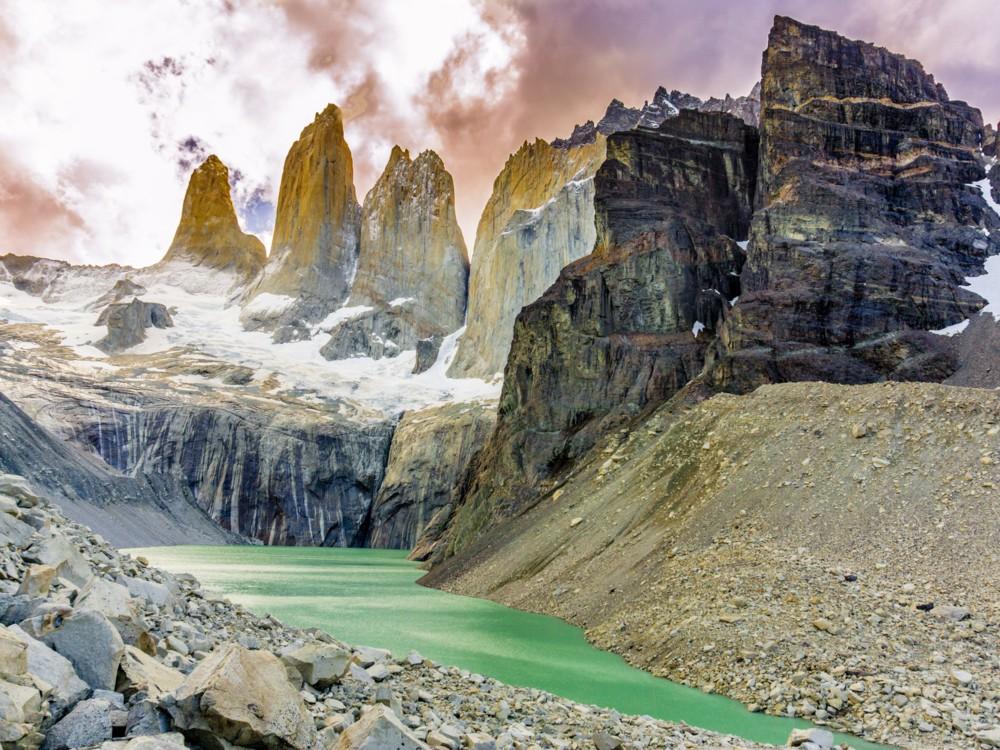 Close to the city of Bizerta, the Ichkeul National Park in northern Tunisia has been on the UNESCO World Heritage List since 1980. The park has one of the few lagoons in North Africa that does not dry out at any time of the year, hence it is the winter refuge for up to 180 birds, some of them rare species. 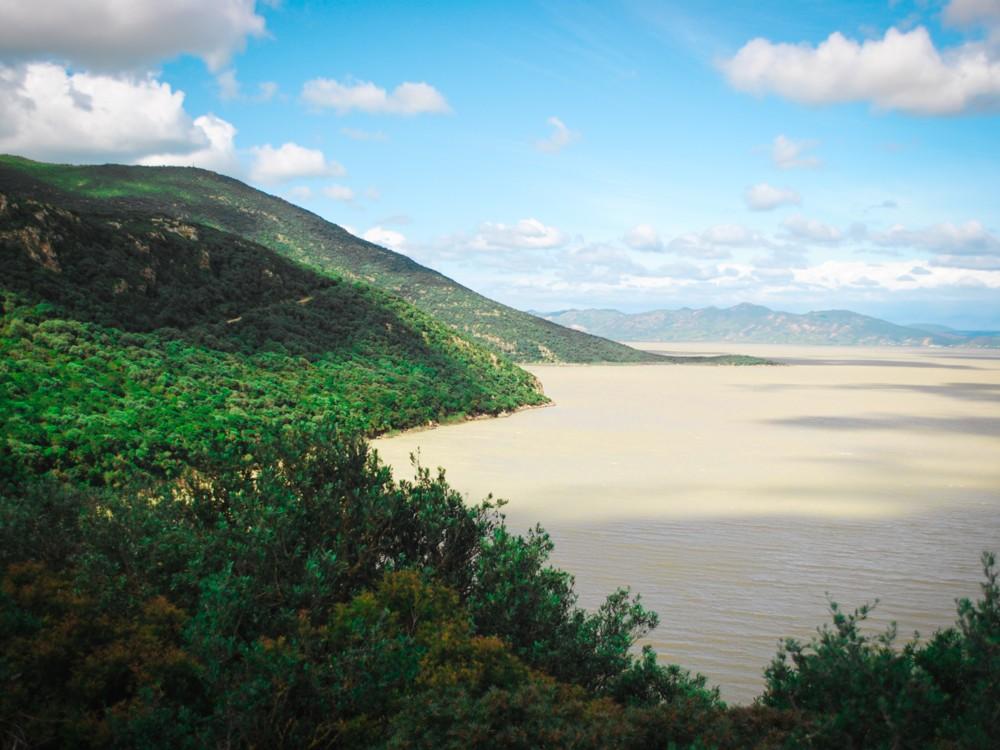 This is the only Spanish national park located in the autonomous community of Catalonia. We will find water everywhere in this wild corner of the Pyrenees. Its landscape is made up of hundreds of lakes, fed by countless streams that fall on waterfalls as they cross the valleys of pine and fir forests. There is also abundant wildlife, including golden eagles and the Pyrenean chamois. An ideal area for hiking. 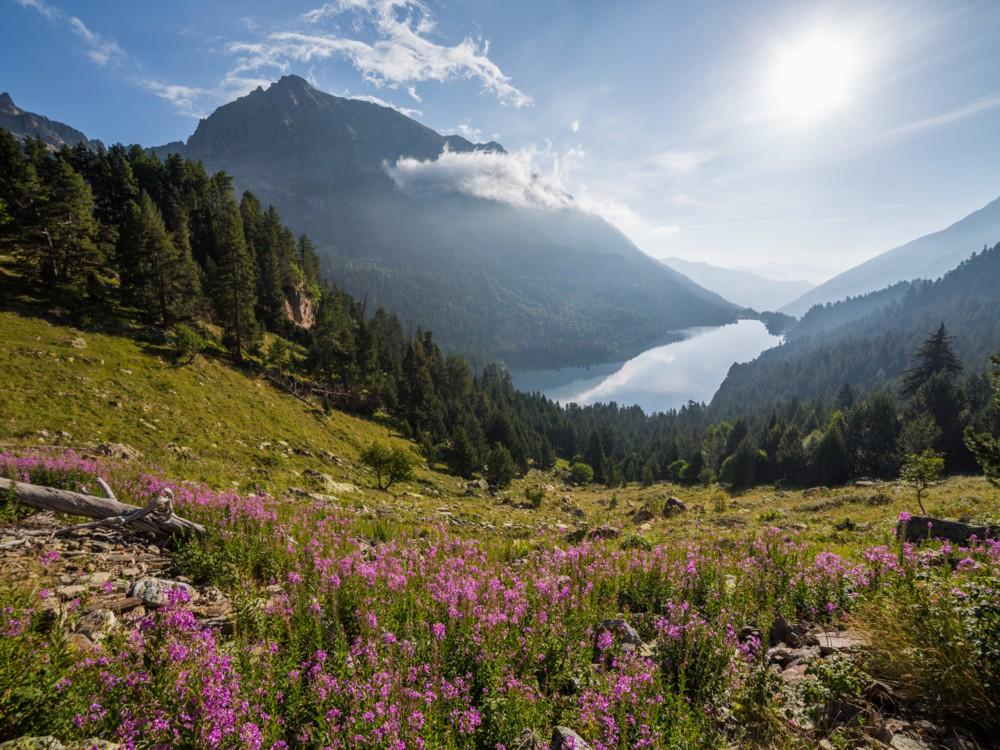 This is Mount Everest Park. This corner of the world, a UNESCO World Heritage Site, is home to glaciers, valleys and peaks where we can even find the fabulous snow leopard.