Peugeot, fiercer than ever at the Milan Design Fair

Our fruitful visit to Milan Design Week was marked by an amazing staging: that of the Peugeot Design Lab; the design team of the French brand did a job that perfectly reflects the power of avant-garde design that has always defined the lion brand.

I would like you to exercise your imagination so that you could perceive the impressive image that dazzled us as soon as we entered the room. Under a sonorous and luminous universe, exquisitely striking, a monumental Lion stands out as justified protagonist, for its beautiful fluid and sculptural surfaces, without forgetting its impressive size. An image that left us, even those of us who are more than six feet tall, to remain like mere chess pawns at his side.

The bulky fetid is escorted by forty lions made exactly the same as the main figure, but at full size. The show develops by filling with light and sound the most recognisable symbol of the French manufacturer.

Peugeot, with more than two centuries of history, calmly faces the global evolution towards the energy transition. This is the unwritten statement of the brand with its staging; that of being immersed in what is perhaps the most revolutionary moment of the automobile: digitisation.

I would not like to forget what, for me, is a work of art and, although it became known as a concept last year, it was also justifiably in Milan: the Peugeot e-Legend was in charge of welcoming the stand positioned at the beginning of it.

Making a mark to the mythical cars of the sixties and seventies of the mark of the last century, and showing that the design that is able to fit beyond the look will never pass, e-Legend inherits the design language of the legendary Peugeot 504 Coupe. But this is just the skin, under the bodywork electrification and autonomous technology reach their highest score.

Movement is the essential ingredient capable of making the car’s design language a full triumph. Peugeot does not forget this, and therefore presents in Milan the avant-garde design that will govern the outlines of the upcoming launches: the Peugeot 208, which, as commented in previous articles, was unveiled at the last Motor Show in Geneva.

And by the same token, it presents through the new 208 the greatest certainty that can be defended at the moment in the automotive industry, the future of the industry is and will be plural in technological choices and opposite in the comparative of its offers.

The electric version coexists with diesel and gasoline in the model recently launched by Peugeot, defending in this bet, always under my interpretation, that the car was never so respectful with the Earth and its inhabitants as at this moment, Whatever technology moves it. 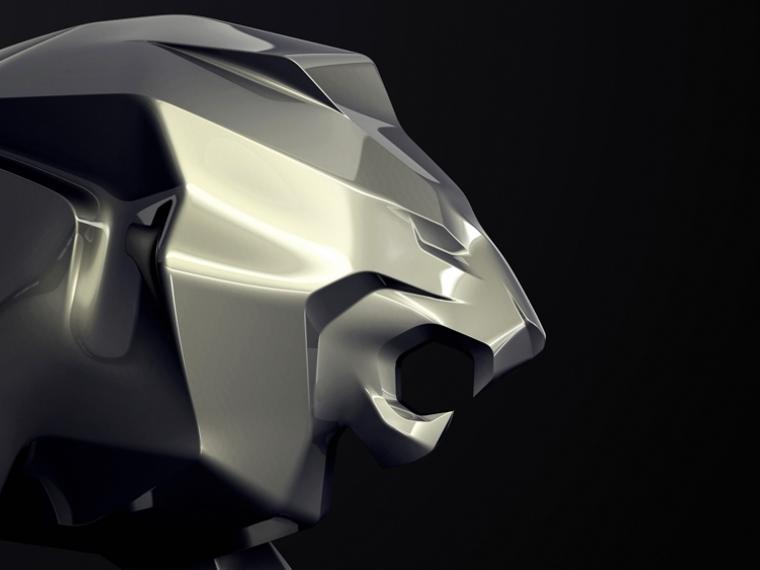 The sculpture represents the pride, strength and excellence of the brand. This is how the Peugeot Design Lab’s leaders define it. This department positioned within the French group as its own brand gives service to external customers, foreign to the automotive world. Boats, trains, bicycles, aircraft seats and toys are some of the disparate projects in which this company has been involved. 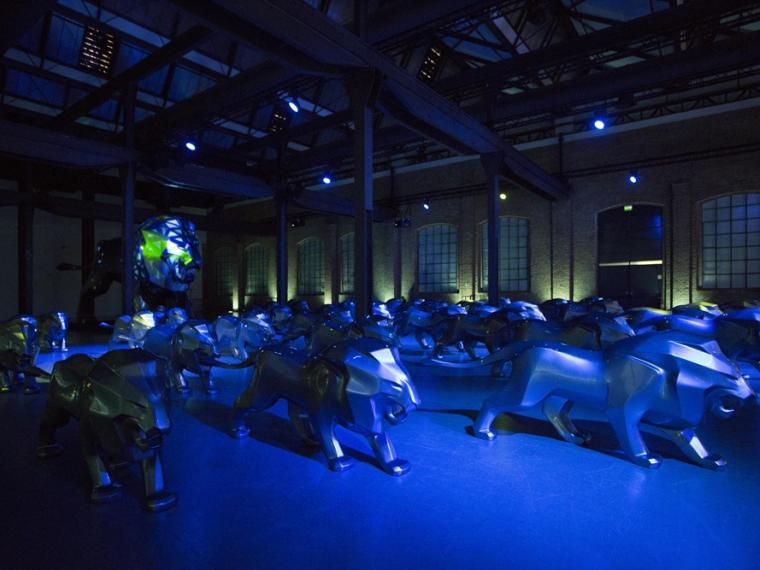 The Lion and his court

As warriors of Xian, the forty lions escort a symbol written with 208 years of history and at the same time position themselves strictly organized to give strength to a revolutionary future that is already here. 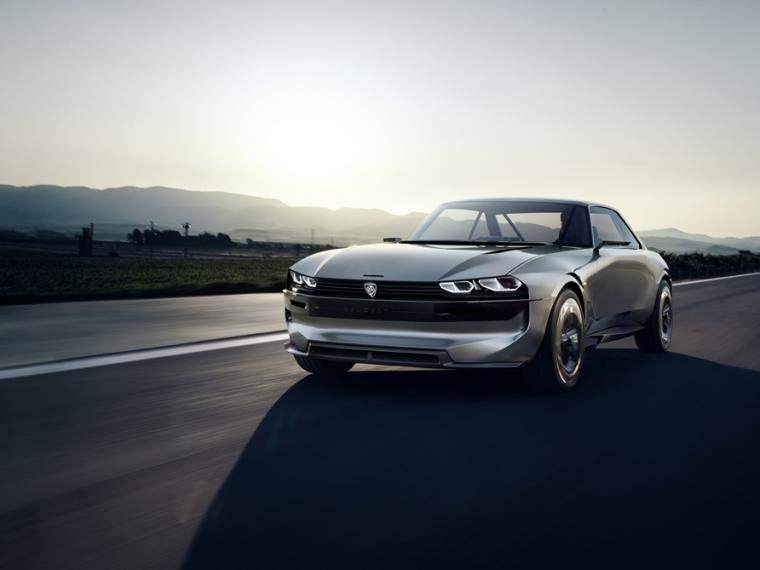 The future that does not forget the past

This car, which was born with a blatantly similar in appearance to the mythical Peugeot 504 Coupe, is just a concept and is not at the moment in the plans of the manufacturer to turn it into another product in the sales catalogue.

And I say for now, because from the minute one of its appearance the stir it has created in all markets through social networks has been incredible. As an example, there is a group that collects signatures to claim their manufacture. 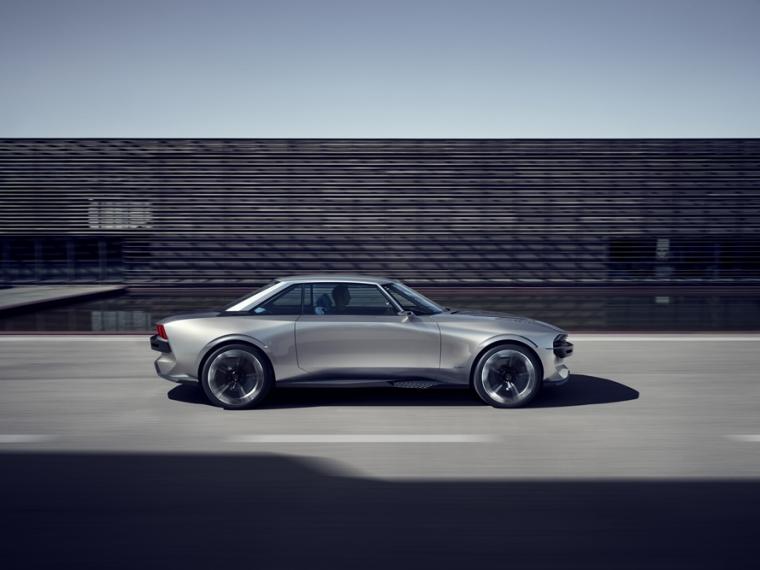 Peugeot embodies the ability of rational and emotional coexistence through e-Legend. It disproves the packages of the definition of the electric car as a mere appliance. Adopting the design of one of the emblematic models of the brand, it provides an avant-garde realism where connectivity, electrification and autonomous driving will not cloud personalisation and elegance, as well reflects this concept. 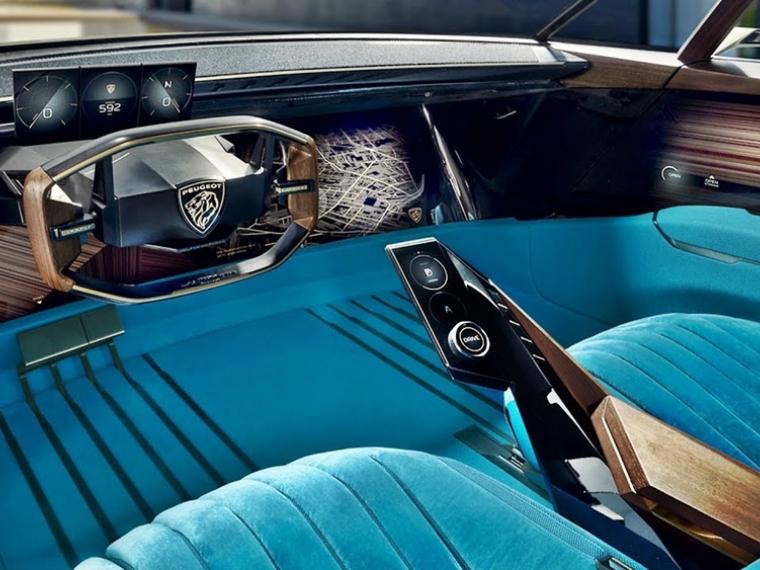 Reaching the maximum level of autonomous driving for the French group is no longer a future. More than a year ago a car left the factory in Vigo arriving in Madrid by a 100 x 100 autonomous drive. The interior of the e-Legend offers the driving of the future with an existing technology that allows steering the steering wheel or, on the contrary, ordering its concealment while the vehicle is in circulation. 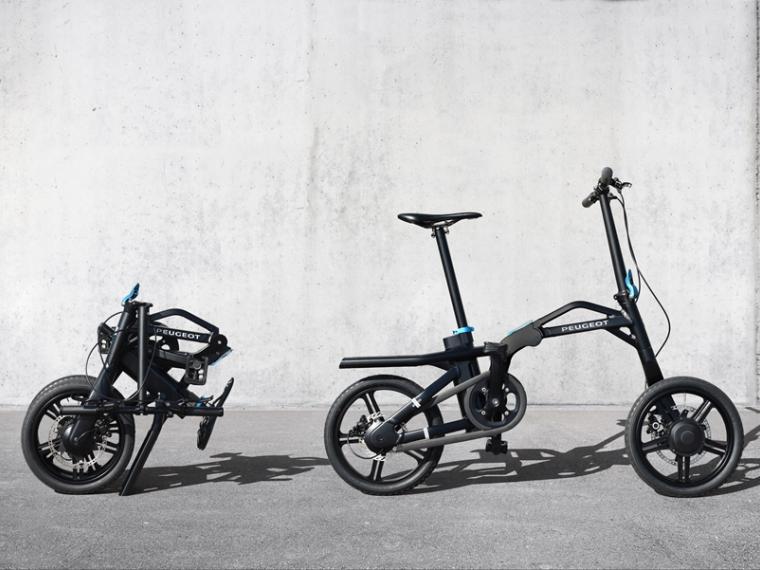 The Peugeot Design Lab has created this electric bike with a range of 30 km at a speed of 20 km/h.

The new member of the 'last kilometre' option

As you will remember a few months ago I was telling you about the Peugeot brand’s plans for when you want to finish the journey you started on the Peugeot 508 C with another mobility option and that this is inside your car. The hybrid bike option is already on sale for about 2,000 euros and you can purchase it independently of the purchase of the SUV. 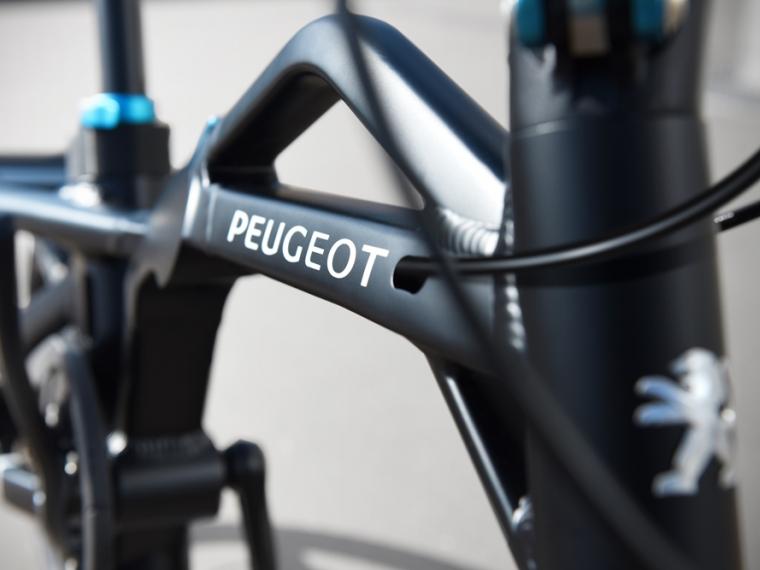 Peugeot 208, in another wave

As an example of the new design language of the lion brand, Peugeot is positioning its latest launch at the Milan stand. A car that defies a segment characterised by expressive models, offering freshness and strength.

The 208 facing the future

Being aware of the changes demanded by customers, who refuse to take a minimum step back from the emotions conveyed by traditional driving to the detriment of electric driving, the Peugeot 208 is born offering three versions, electric, petrol or diesel.

It also offers an exact exterior appearance and an interior with the only absences that the technology we choose does not need. 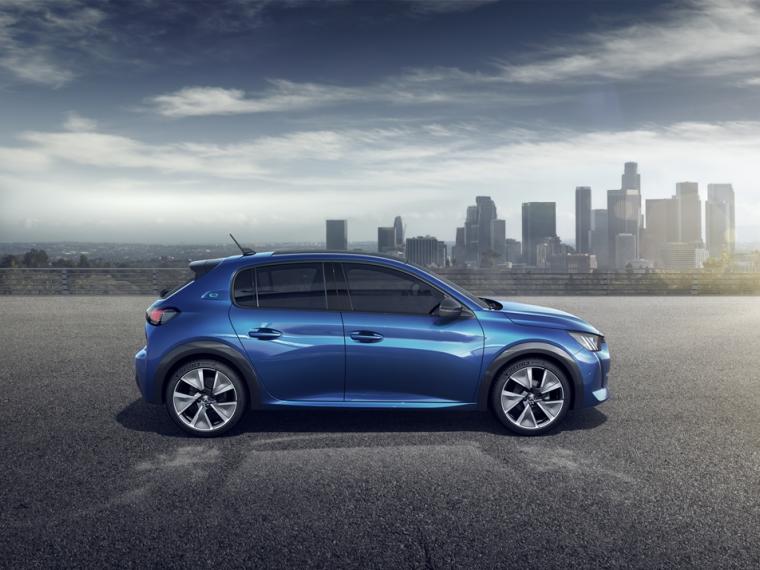 The innovation of this model does not end in the design. The new 208 also makes reference to the new generation of the Peugeot i-Cockpit. For the first time, a high 3D instrument array appears. In addition, it once again states that belonging to a segment only defines it in size, since it includes driving aids functions and terminations only present so far in higher segments. 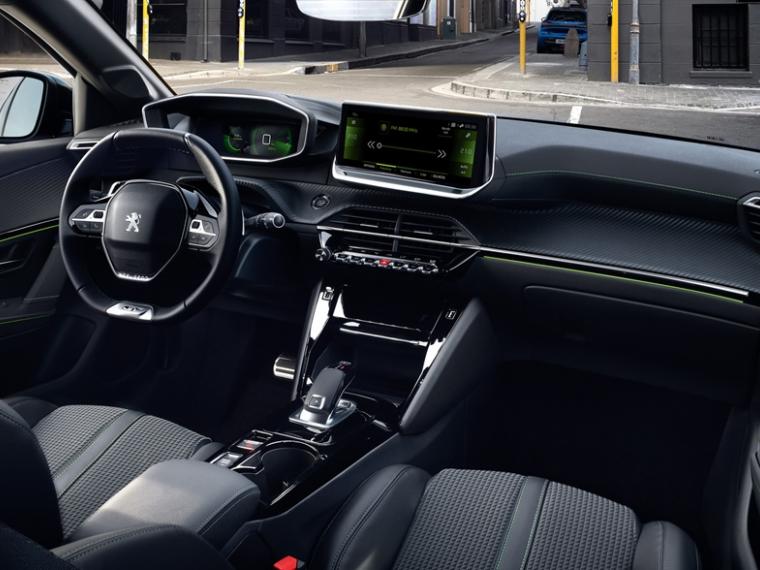 Being available at the same time as other technologies, the first 208 hundred percent electric is alive and very pleasant to drive. The engine reaches 100 KW (136 hp) power and 260 Nm torque giving an immediate dynamic response through silent and vibration-free driving. 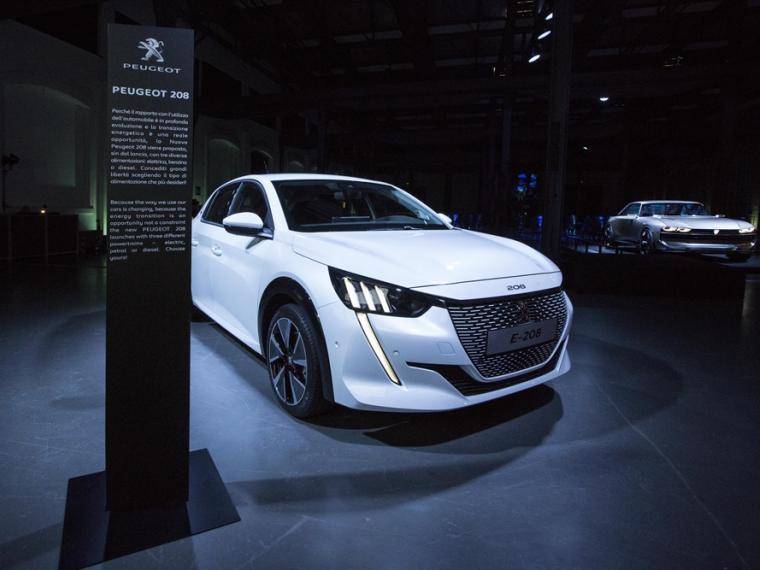 An electric one for long trips

With a maximum range of 450 km it reaches the e-208 according to the type approval protocol we take. They are the performance of a battery with a capacity of 50 kWh that has guarantee of eight years or 160.000 km. 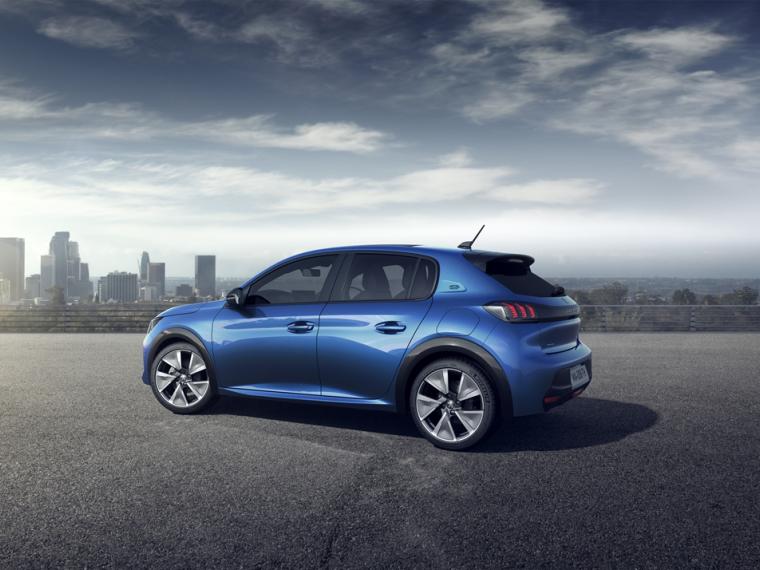 You decide how to drive it

The innovative electrification of this model provides a real driving experience through three pilot options. The ECO mode, which prioritizes consumption for long trips; the comfort mode, for daily use; and the sport mode, where it prioritizes performance by transmitting to the driver the sensations of a pair and a maximum power and achieving a result of 8.1 seconds from 0 to 100 km/h.