Evidence that proves that man reached the moon

Humans first set foot on the moon on July 20th 1969, achieving what we might call ‘the greatest exploration feat of mankind’. For two and a half hours, astronauts Neil Armstrong and Buzz Aldrin explored the lunar surface on foot as Michael Collins piloted the Apollo 11 orbiter around the moon.

This is the history we continue to celebrate today, almost 50 years after the first landing. Many will remember seeing that historic moment for themselves; others, will have heard the story from their parents and grandparents. But what happens when someone insists that man’s arrival on the moon never happened, that we never actually set foot on the moon?

Incredible as it may seem to most of us, it seems necessary to delve into some of the most common questions about landing on the moon and addressing the most curious lunar phenomena with the latest data and scientific understandings.

Let’s be clear. A lot of hard evidence supports the fact that humans have actually set foot on the moon several times between 1969 and 1972. But it is important to question and critically think about events on this scale, and at times investigating and deciphering the answers can be quite entertaining.

When you write about space as much as we do (and we love it) every once in a while we hear, “Hey, did we really land on the moon?”. Which is why it is necessary for us to present evidence and arguments regarding the lunar landing to dismantle creative theories that have been brought up, however all they achieve is undermining the understanding of the general public.

Pseudosciences under the appearance of skepticism

It happens every year and it is not surprising when you consider that a large majority of the world’s population still believes that NASA faked the moon landings.

The Internet and Youtube are plagued by millions of claims that NASA planned an Apollo fraud. Even in the film ‘Interstellar’ (2014) by Christopher Nolan, there is a scene in which Matthew McConaughey confronts future educators who deny that NASA landed on the moon. Why are there so many attacks on the great achievements of the Apollo missions? One of the most important reasons is the increase of pseudoscience in popular culture.

Some theorists present themselves as rebels against the general orthodoxy of modern science. They offer an endless stream of false “tests” for scientifically illiterate and well-meaning skeptics, but there is no doubt that NASA sent humans to the moon.

In 1969, video and television technologies were not advanced enough to stage and simulate lunar landing in a plausible manner. NASA had neither CGI nor Photoshop at the time. TV cameras were primitive compared to the cameras of today.

Although false claims regarding the lunar landing have been discredited many times on the Internet, these are some of the most obvious reasons why the Apollo landings could not have been staged. Let’s look at the evidence. 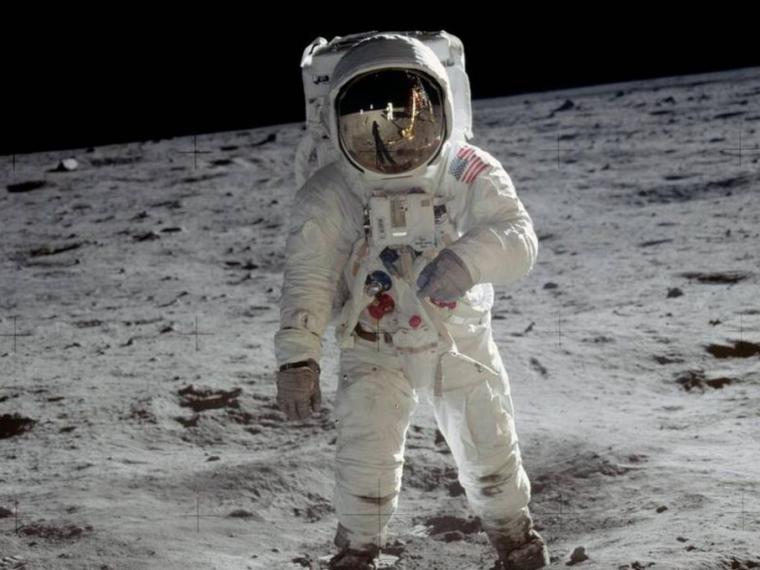 Human beings have stepped on the moon (several times)

In spite of this fact, there are still groups of people who are convinced that the landings of Apollo 11 were faked in order to irritate Russia and test the loyalty of the tens of thousands of people that were involved in covering up the largest news story in human history. Even today, these people take to YouTube and social media in general, with various pieces of evidence and theories that man didn’t walk the surface of the moon. The truth is that we did, and we are going to provide all the proof. 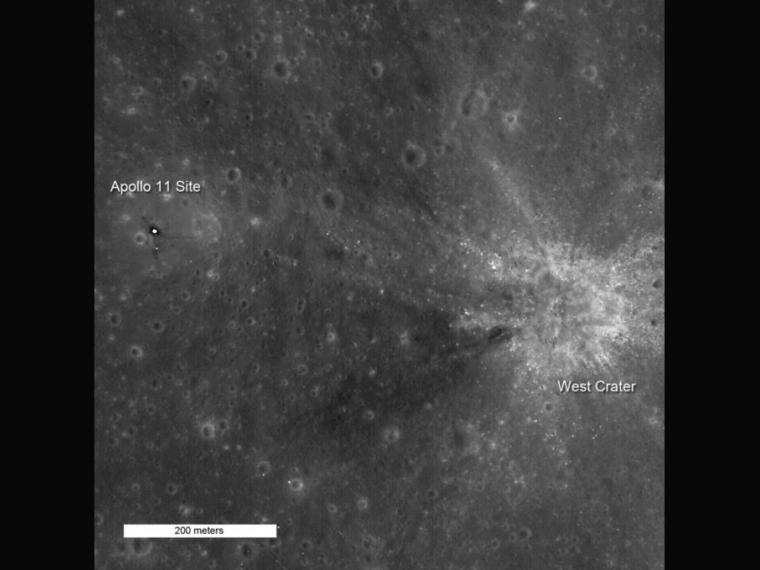 It is often claimed that if the lunar landings had been real, we could have seen them from Earth. Sorry to let you down, but it’s too far to be visible with a naked eye. However, we can see the lunar landing sites thanks to the Lunar Reconnaissance Orbiter spacecraft launched in 2009. In the image we can see that everything is as said. 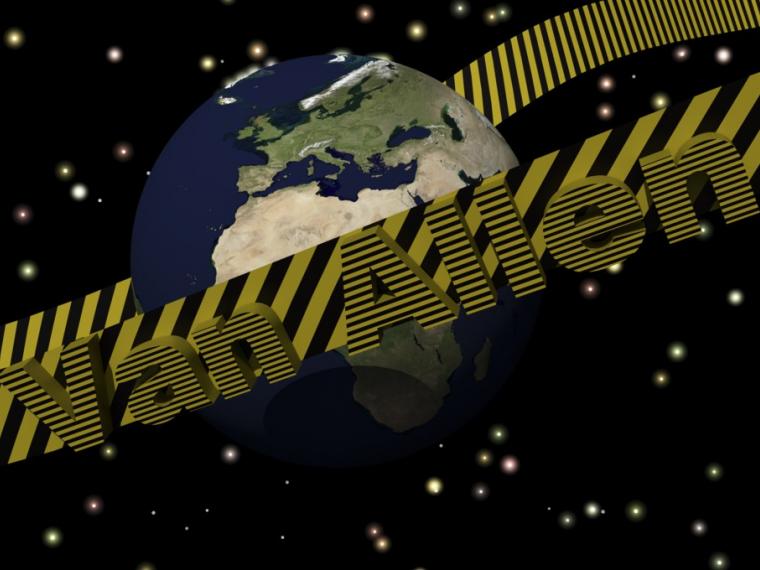 One of the most popular theories that supports the idea that humans haven’t landed on the moon, has to do with the Van Allen radiation belt. These are two huge radiation belts surrounding Earth, formed by Earth’s magnetic field and struck with high energy particles from the Sun’s wind.

This theory states that humans could not have passed through these belts without being literally ‘fried’ with lethal doses of radiation. The international scientific community knew about the Van Allen radiation belts through the Explorer and Pioneer missions of the 1950s.

Fortunately, at the time of the Apollo launched, the Van Allen belts were at their lowest intensity, fluctuating with the Sun’s activity. Radiation sickness occurs when one has been exposed to 200 to about 1000 ‘rads’ of radiation within the span of a few hours.

The crew of Apollo 11 were inside the belt for less than two hours during their trip to the moon, so they would only have been exposed to an estimated 18 rads, therefore, within the safety limit. There may still be some adverse effects, even from this level of radiation, so NASA made sure the Apollo 11 spacecraft was well insulated so that the average daily radiation dose during the 12-day mission was only 0.18 rads - which is about the same exposure one would get from a chest x-ray. 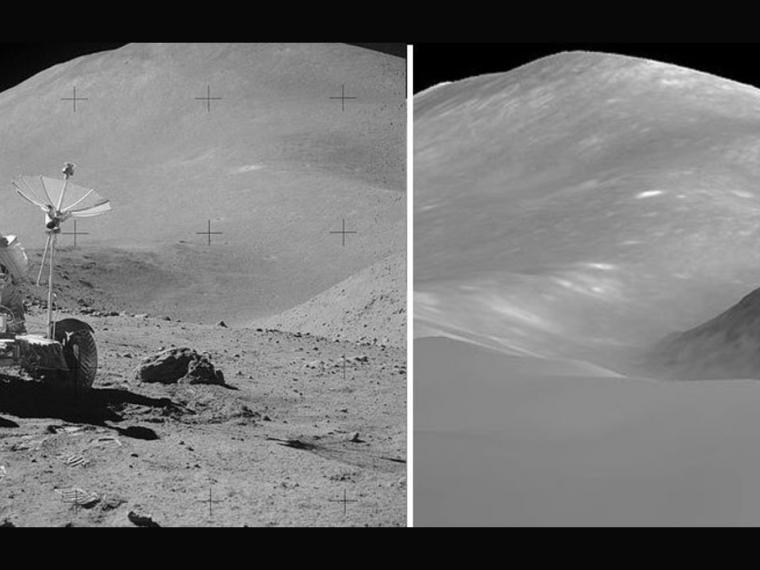 In 2008, the Japanese probe SELENE of the Japan Aerospace Exploration Agency (JAXA) obtained several photographs that serve as proof of the landings. In the photographic evidence of the moon’s landings, we can see, by comparing the image on the left, (since the landing of Apollo 15) taken in July 1971, with the images of the probe’s ground camera, that they are exactly the same. It is identical to the image shown in the photographs taken by the astronauts. 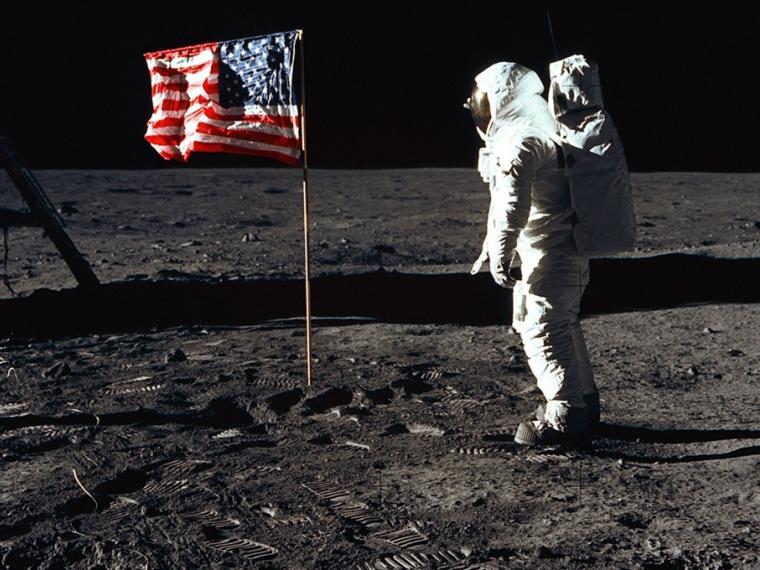 This is one of the biggest claims of conspiracy fanatics. When the astronauts Armstrong and Aldrin placed the U.S. flag and recorded it with the television camera that they had previously set up, it seemed to be blowing in a non-existent lunar breeze. But, if there is no atmosphere on the moon, how can there be a breeze to move the flag?

Firstly, the United States flag hung from the top of a telescopic rod in order to keep it extended, however, it did not extend completely. The astronauts had difficulty nailing the flagpole into the lunar surface. They hit solid rock after a few inches. Keeping the flag standing for the photo was actually a rather complicated task, and this led to great movement of the actual flag.

The moon has no atmosphere (apart from some sparsely dispersed ions and dust), but it does have gravity. The waving of the flag doesn’t have to be due to the force exerted by a current of air. In this case, the movement is caused because the flag is nailed to the ground, the main pole is rotating back and forth to achieve it.

Thus, the force itself causes “ripples” to appear, which also propagate on the surface and lose strength, like when you “stretch” your sheets when making your bed. Additionally, the flag was deliberately crumpled on its journey to the moon, hence helping the appearance of movement.

Where are the stars?

Speaking of the photographs of the flag on the moon, people often point out that there are no visible star in the background. This is actually a common feature of photographs taken in space, where the contrast between light and darkness is extreme.

The surface of the moon reflects the strong light of the sun and appears very bright in the photographs. This brightness drowns out the relatively faint light of stars in the dark sky, similar to how car headlights can remove dimmer light from nearby objects. The human eye can adjust and choose the stars, but unless it is properly configured, the camera will struggle with the contrast.

The astronauts were there to explore the moon, not the stars, so they didn’t waste any film taking astrophotos. To sum it up, to capture stars in pictures, they would have to expose them to the camera, which would have resulted in a very blurry lunar surface (they also didn’t bring tripods for long exposure).

Astronauts on the International Space Station regularly take photographs of the Earth showing a completely starless background; it is the same problem dealing with contrast. 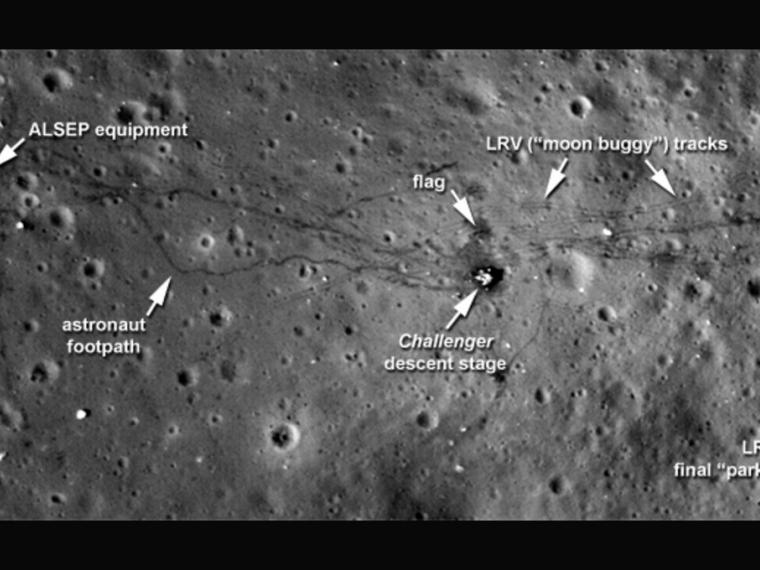 We can see the astronauts' footprints

The footprints left by the astronauts of the Apollo ship are visible. Logically, a telescope like Hubble does not have the resolution to capture details as fine as locating a footprint on the moon: they are too small and the moon is too far away.

As with the photographic evidence provided above, we have a closer spacecraft, the NASA Lunar Reconnaissance Orbiter, which has been in orbit around the moon since 2009. It has captured recent photographs of the Apollo landing sites. These images show the Apollo spacecraft in exactly the right places and you can even see the astronaut’s footprints as they explore the lunar surface.

These landing sites have also been independently detected by a variety of other spacecrafts from China, India, and as we said earlier, Japan. 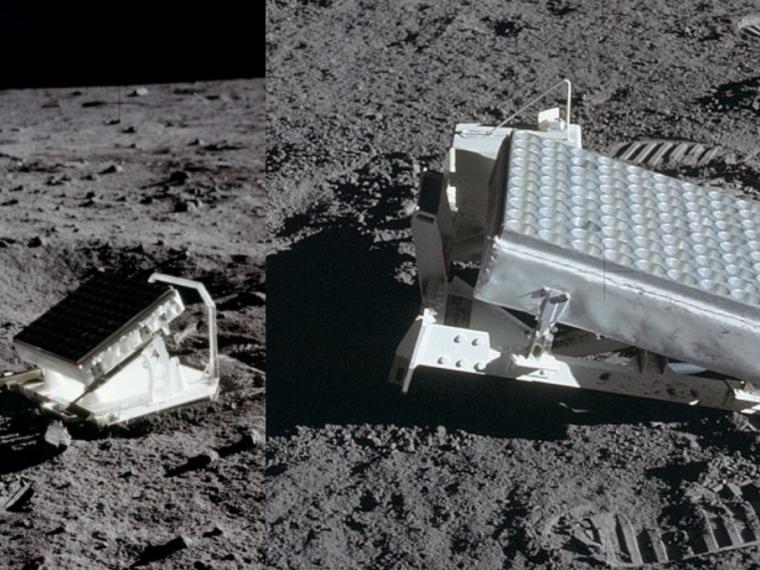 Reflectors on the moon

Apollo 11 and 14 astronauts left behind mirror-shaped prisms on the moon that are used with lasers by scientists at the McDonald Observatory in Texas and other observatories around the world.

Could all the astronomers and scientists at the McDonald Observatory be cheating on NASA? What about astronomers from other observatories in other nations? Once again, indisputable facts. 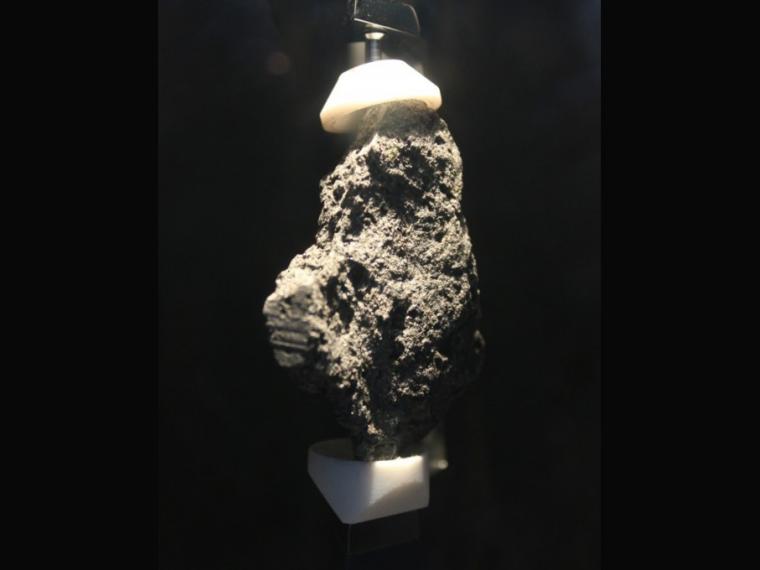 We have proof that the landings on the moon did in fact happen, here on Earth, in the form of moon rocks. When a meteorite hits the moon, the energy from the impact melts some of the debris, once it has cooled, will eventually turn into small glass spheres.

Many of these glass spheres were present in the lunar rock samples brought by the crew of the Apollo. It is one of the two main forms by which glass spherules are formed (the other is by explosive volcanic activity).

On Earth, the elements rapidly decompose any glass produced volcanically, but in space, the glass spherules survive perfectly, and they were found in meteors that collided with Earth and the moon rocks which were brought back from the Apollo missions, which proves once more, that humans have in fact been on the moon.

When the first rocks of the Apollo 11 mission were returned, they were displayed to 135 different countries around the world as a gesture of goodwill. These rocks have withstood every geological test possible in laboratories around the world, and have confirmed that they are of lunar origin. The astronauts brought almost 400 kilos of lunar rocks (rocks that still today resist the microscopic scrutiny of geologists). 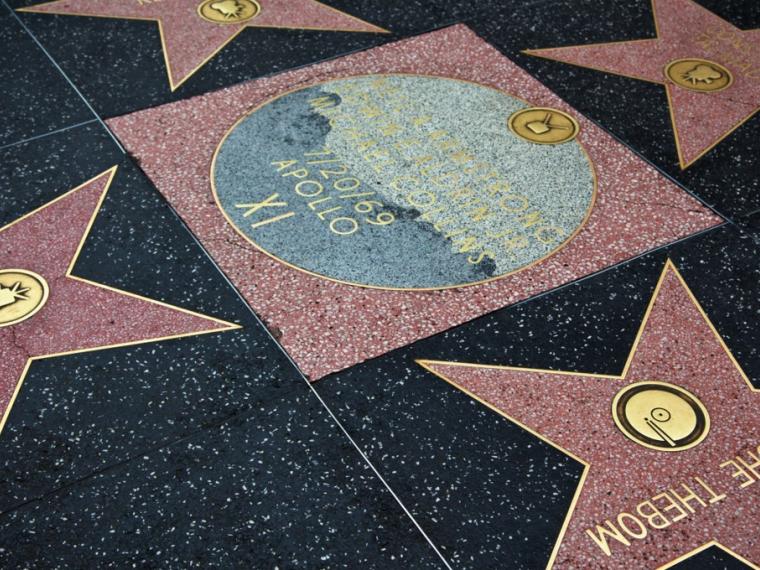 Approximately 400,000 scientists, engineers and technicians worked on the Apollo project for over a decade. They came from many countries and from all over the United States. Therefore, it is totally absurd to believe that they were all deceived or that it was all a part of a NASA hoax.

The most famous (and to avoid) pseudosciences