The most fascinating discoveries of the Spitzer telescope

Back on August 25, 2003, NASA launched one of the most important space exploration missions in the history of mankind, as the Spitzer Space Telescope was the last of the four observatories to reach space.

Initially, the telescope was programmed to last for two and a half years, but its utility was of great importance for the space agency and it ended up surviving six years in total.

The Spitzer space telescope is part of a family of four space observatories, including the Hubble Space Telescope with visible light (HST), the Compton Gamma Ray Observatory (CGRO) and the Chandra X-ray Observatory (CXO).

It was designed to detect infrared radiation, which is mainly heated radiation and it is formed by two main components.

First, the cryogenic telescope assembly, which contains an 85-centimetre telescope and the three Spitzer scientific instruments. In addition, the spacecraft, which controls the telescope, provides power to the instruments, manages scientific data and communicates with the Earth.

Interestingly, the Spitzer space telescope must be simultaneously warm and cold to function properly. This means that everything in the cryogenic telescope assembly should cool to just a few degrees above absolute zero. This is achieved by a tank of board liquid helium. Meanwhile, electronic equipment needs to operate near room temperature.

After 16 years of observing the universe, NASA has decided to permanently shut down the Spitzer on January 30, 2020.

“Although it would be great to be able to operate all of our telescopes forever, this is not possible,” noted the NASA astrophysics director Paul Hertz.

Mega Interesting reviews the most outstanding discoveries of the Spitzer telescope. 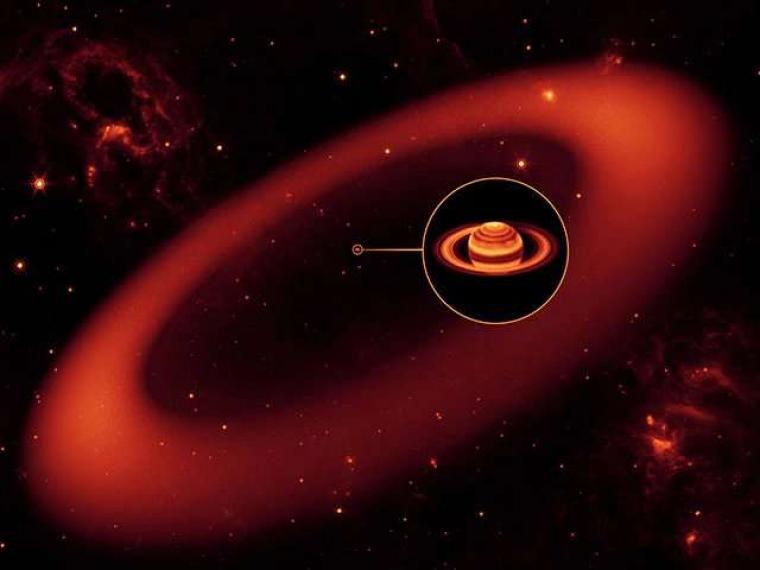 Saturn's impressive ring system has been photographed extensively, but those portraits have not revealed the largest ring on the planet. The thin structure is a diffuse collection of particles that orbits Saturn much farther from the planet than any of the other known rings.

If we could see the ring with our eyes, it would be twice the size of the full moon in the sky.

One of Saturn’s farthest moons, Phoebe, circulates inside the ring and is likely to be the source of its material. The relatively small number of particles in the ring does not reflect much visible light, especially in Saturn's orbit, where sunlight is weak, which is why it remained hidden for so long.

However, the Spitzer was able to detect the brightness of the cold dust in the ring, which has a temperature of approximately -193 degrees Celsius. 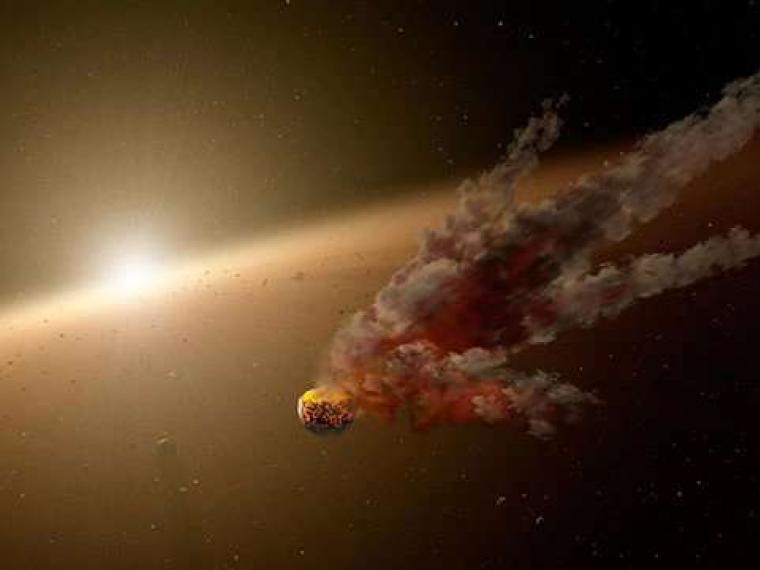 The birth of a Solar System

Spitzer has found evidence of several rocky collisions in distant solar systems. These types of collisions were common in the early days of our own Solar System and played an important role in the formation of planets.

In a particular series of observations, Spitzer identified a large cloud of dust around a young star that could be the result of a clash between two large asteroids. Scientists had already been observing the system when the collision occurred, which was the first time that they collected data from such a phenomenon. 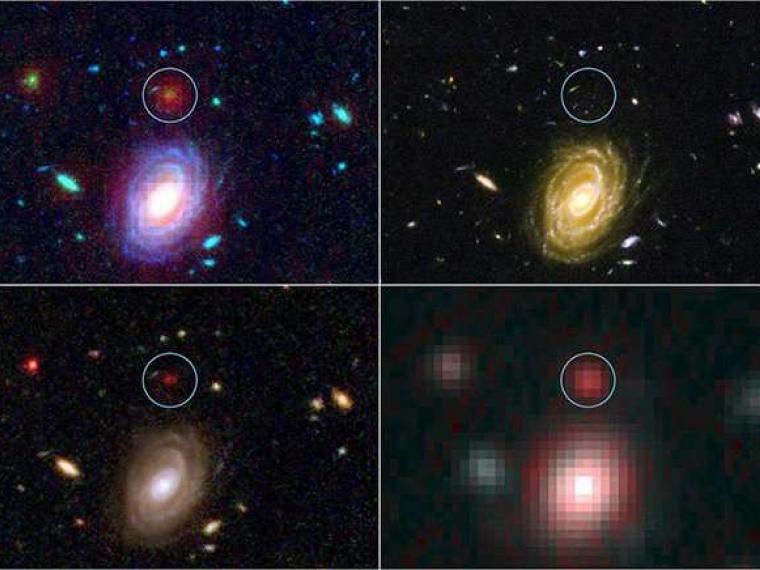 One of the most surprising discoveries in this area of ​​research was the detection of galaxies commonly known as "big babies," or those that were much larger and more mature than scientists thought could be early-forming galaxies. Until then, scientists believed that large and modern galaxies formed through the gradual fusion of smaller galaxies. But the 'big baby' galaxies showed that massive collections of stars gathered very early in the history of the universe. 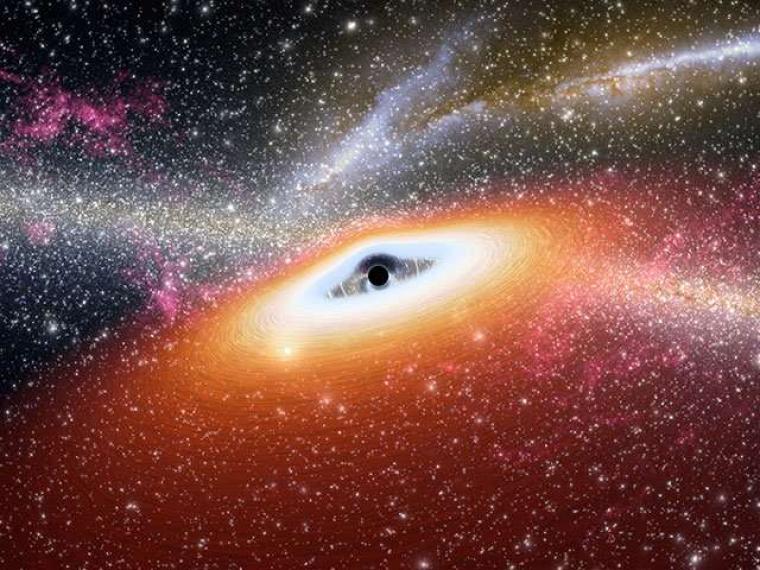 Galactic black holes are usually surrounded by dust and gas structures that feed and sustain them. These black holes and the discs that surround them are called quasars. The light of the two quasars detected by Spitzer travelled for 13 billion years to reach Earth, which means that they were formed less than a billion years after the birth of the universe. 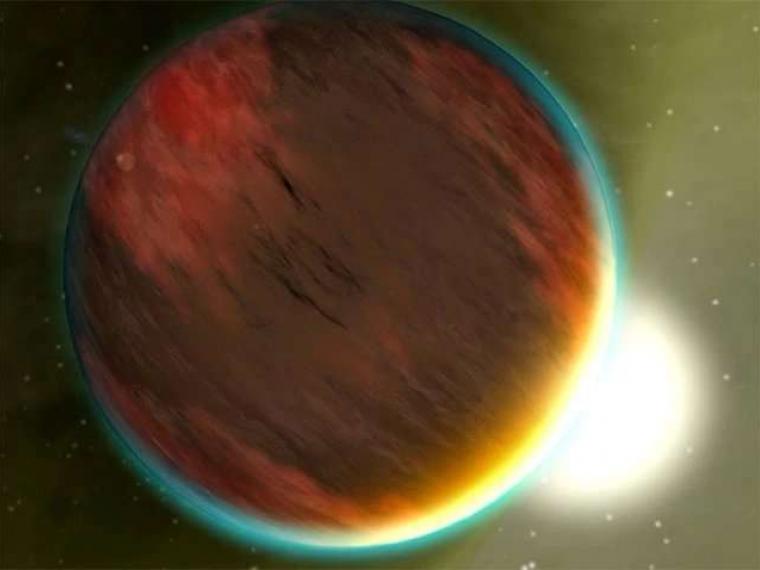 In 2007, the Spitzer became the first telescope to identify molecules in the atmosphere of an exoplanet. Scientists used a technique called spectroscopy to identify chemical molecules in two different exoplanets. HD 209458b and HD 189733b, also called "hot Jupiters", are made of gas (instead of rock), but orbit much closer to their suns than the gaseous planets of our own solar system.

The direct study of the composition of exoplanet atmospheres was an important advance towards the possibility of life being detected in rocky exoplanets in the future. 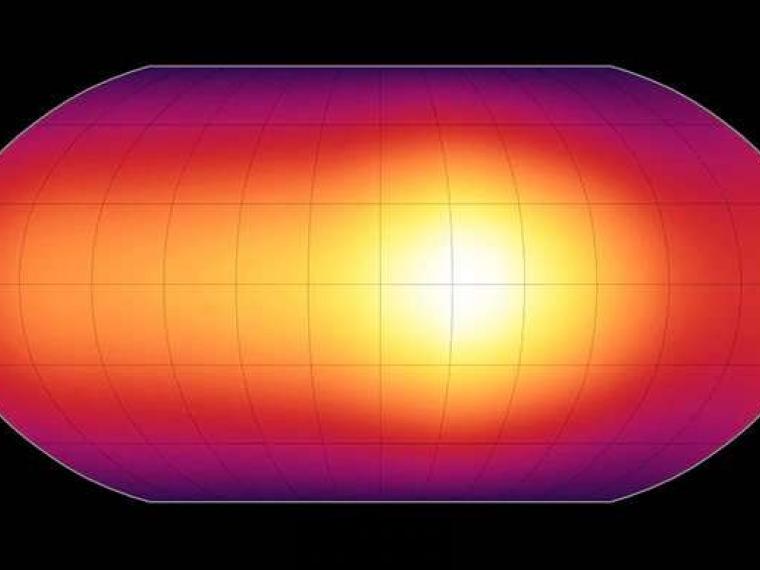 The first weather map of an extrasolar planet

The Spitzer detects infrared light, which is often emitted by hot objects in the form of heat. While the designers of the mission never planned to use the observatory to study planets beyond our Solar System, their infrared vision has proven to be an invaluable tool in this field.

In May 2009, using Spitzer data, scientists produced the first "weather map" of an exoplanet. This map traced temperature variations on the surface of a giant gas planet, called HD 189733b. In addition, the study revealed that strong winds probably plague the atmosphere of this planet. 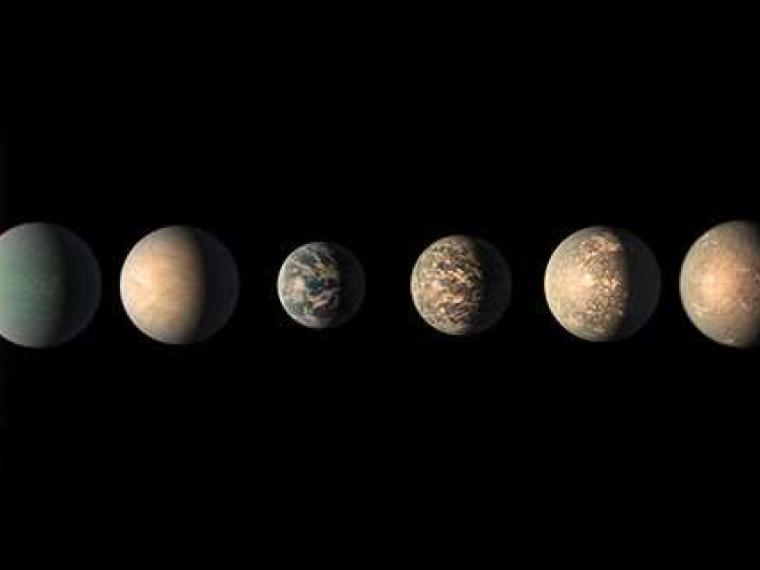 Three of the planets are located in the "habitable zone" around the star, where temperatures could be adequate to withstand liquid water on the surface of a planet. The discovery represents an important step in the search for life beyond our Solar System.

The Spitzer observed TRAPPIST-1 for more than 500 hours to determine how many planets are in orbit around the star. The infrared vision of the telescope was ideal for studying the star TRAPPIST-1, which is much cooler than our sun.

Spitzer's observations have also allowed scientists to obtain data on the size and mass of these planets, and also to deduce if they can harbour life. 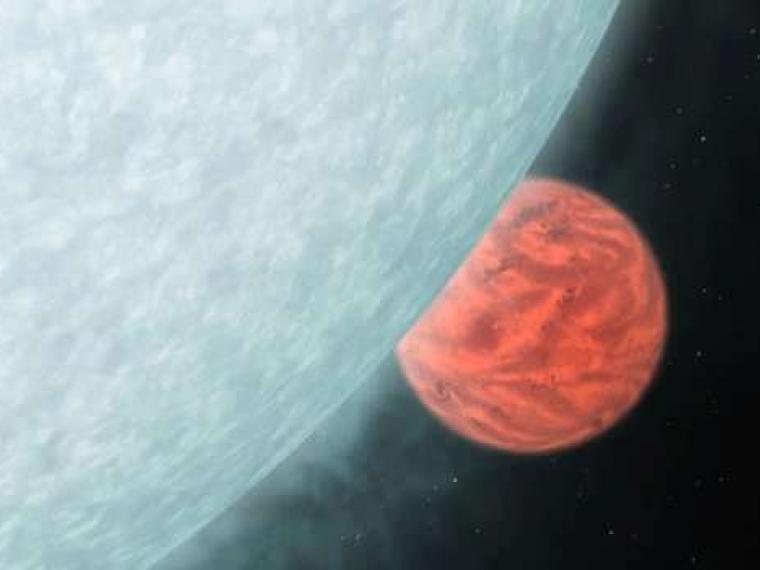 The first light of an exoplanet

Spitzer was the first telescope to directly observe the light of a planet outside our solar system. Before that, exoplanets had been observed only indirectly. This achievement initiated a new era in the science of exoplanets and marked an important milestone on the road to the detection of possible signs of life in rocky exoplanets. 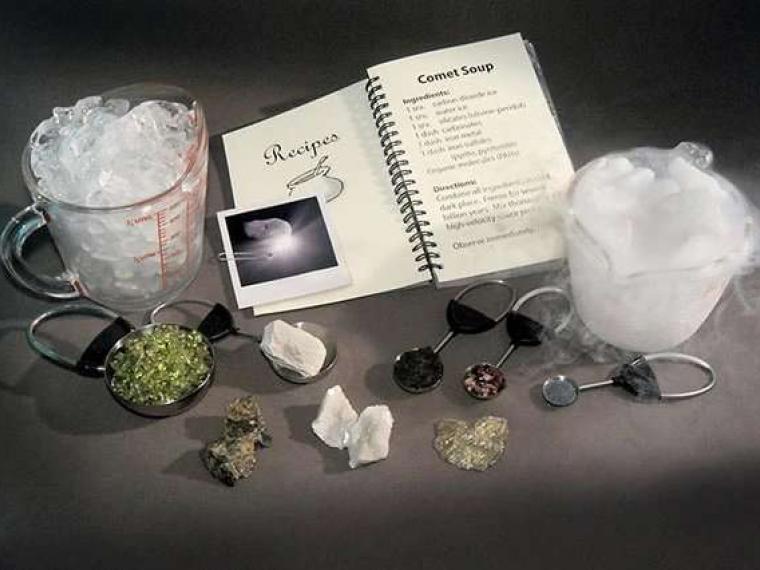 When NASA's Deep Impact spacecraft intentionally crashed into comet Tempel 1 on July 4, 2005, it ejected a cloud of material that contained the ingredients of the primordial soup of our solar system. Combining Deep Impact data with Spitzer observations, astronomers analysed that soup and began to identify the ingredients that eventually produced planets, comets and other bodies in our solar system.

Many of the components identified in the comet's dust were known ingredients, such as silicates or sand. But there were also surprise ingredients, such as clay, carbonates, iron-containing compounds and aromatic hydrocarbons found in cars on Earth. The study of these ingredients provides valuable clues about the formation of our solar system. 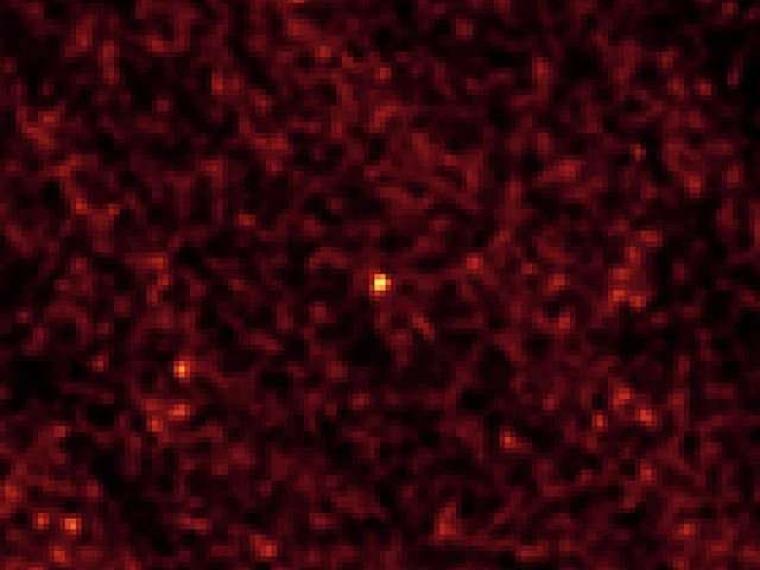 The discovery of small asteroids

This space observatory can also be used to study small objects closer to Earth. In particular, Spitzer has helped scientists identify and study Near-Earth Asteroids (NEA). NASA monitors these objects to ensure that none of them is in the process of collision with our planet.

Spitzer is particularly useful for characterising the actual sizes of NEAs, since it detects infrared light radiated directly from the asteroids. Asteroids do not radiate visible light, but simply reflect it from the sun. 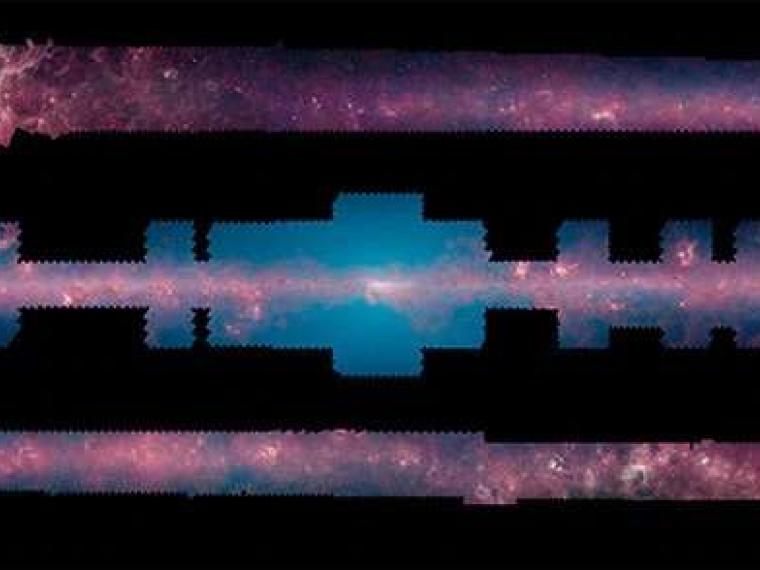 An unprecedented map of the Milky Way

In 2013, scientists collected more than 2 million images taken by the Spitzer for 10 years to create one of the most extensive maps of our galaxy ever made, known as the Milky Way.

Studies of our galaxy, by using Spitzer data, have provided scientists with better spiral structure maps. The Spitzer has helped discover new remote star formation sites and has revealed a greater abundance of carbon in the galaxy than expected. 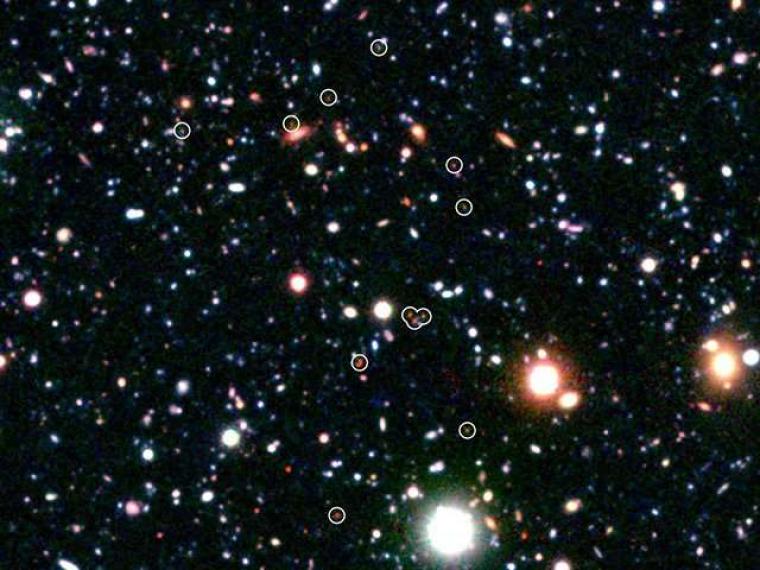 A 'big city' of galaxies

In 2011, the Spitzer detected a very distant collection of galaxies called COSMOS-AzTEC3. The light of this group of galaxies travelled for more than 12 billion years to reach Earth.

Astronomers think that objects like this city of galaxies, called protoclusters, grew in modern clusters of galaxies, or groups of galaxies linked by gravity. COSMOS-AzTEC3 was the most distant protocluster ever detected. It gives researchers a better idea of ​​how galaxies were formed and evolved throughout the history of the universe. 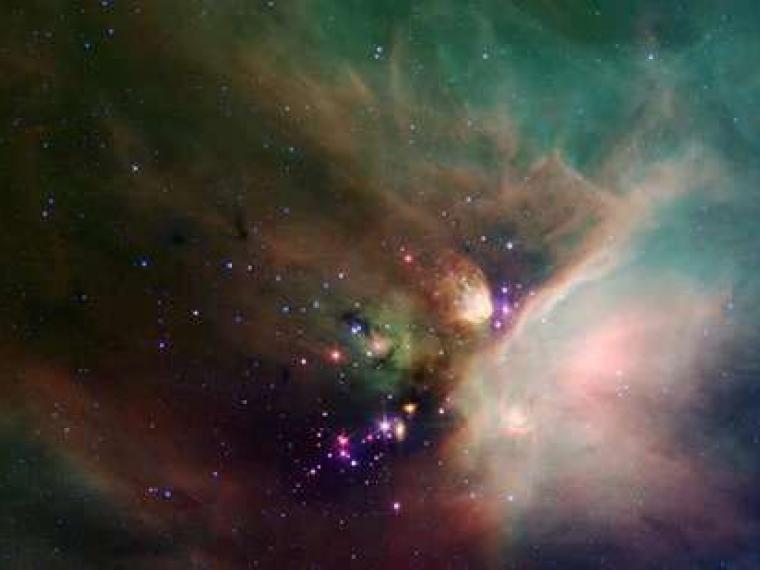 Infrared light can, in most cases, pass through gas and dust clouds better than visible light. As a result, Spitzer has provided unprecedented views in regions where stars are born. This Spitzer image shows new-born stars peeking out from under their natal nebula in the dark cloud of Rho Ophiuchi.

Called "Rho Oph" by astronomers, this cloud is one of the star-forming regions closest to our own Solar System. Located near the constellations of Scorpio and Ophiuchus, the nebula is about 410 light-years from Earth. 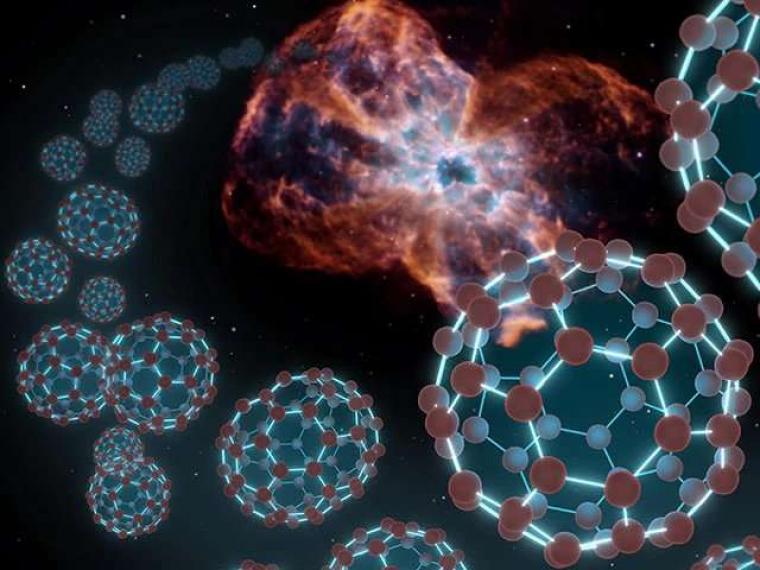 They are known in English as 'buckyballs', named for their resemblance to geodesic domes designed by architect Buckminster Fuller, and are spherical carbon molecules that have the hexagonal-pentagonal pattern.

These spherical molecules have applications in medicine, engineering and energy storage. The Spitzer was the first telescope to identify the 'buckyballs' in space.

The telescope discovered the spheres in the material around a dying star, or planetary nebula called Tc 1. The star in the centre of Tc 1 was once similar to our Sun, but as it grew older, it detached itself from its outer layers, leaving a dense white dwarf star.

Astronomers believe that ‘buckyballs' were created in layers of carbon that came off the star. Follow-up studies with Spitzer data have helped scientists learn more about the prevalence of these unique carbon structures in nature. 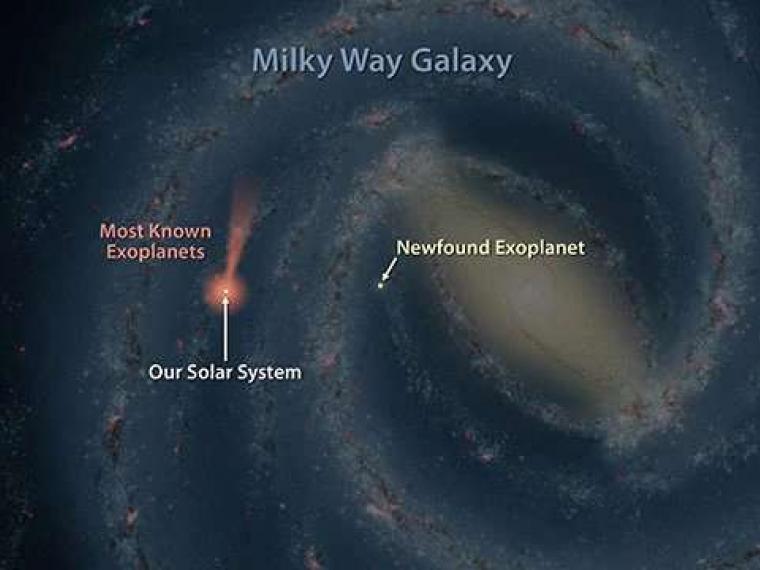 The most distant planet ever observed

The Spitzer accomplished this task with the help of a terrestrial telescope and a technique of searching for planets with a microlens. This approach is based on a phenomenon called a gravitational lens, in which the light bends and is magnified by gravity. When a star passes in front of a more distant star, as seen from Earth, the gravity of the foreground star can bend and magnify the light of the star in the background. If a planet orbits the foreground star, the planet's gravity can contribute to this increase and leave a distinctive mark on the magnified light.

The discovery provides one more clue for scientists, who want to know if the population of planets is similar in different regions of the galaxy, or if it differs from what has been observed in our local neighbourhood.

The weirdest things dogs do can be explained

The most spectacular nebulae in the universe