All spiders are carnivorous. They feed on crickets, cockroaches, flies, birds and small vertebrates, but there are some - very few, of course - herbivorous spiders, such as the” jumping Bagheera kiplingi, a Central American spider that only eats plants. Scientists are convinced that there are still amazing species yet to be discovered. To this day, approximately 43,000 types of spiders are known worldwide, and in Australia alone there are more than 4,000 types of spiders.

Although there are people who suffer from arachnophobia, the most striking thing of all is that usually the spiders that are considered the most terrifying are harmless to humans, aside from the sensation of panic they can create in some human beings. In fact, there are more cases of wounds caused the reactions of seeing a spiders rather than by spider bites.

A study published in the journal The Science of Nature, in 2012, revealed that if all the spiders of the planet were coordinated and began to eat human beings, it would take less than a year to do so and they would even go hungry, because between all of them, they can eat the equivalent of 400-800 million tons a year in prey.

If we had to highlight one spider which has a deadly bite, this would be without a doubt the Atrax Robustus spider. This Australian spider, also known as the Sydney spider, is one of the spiders with the most powerful bite in the world, so powerful that it’s tusks are even capable of passing through a human shoe. The banana spider or the Phoneutria nigriventer is another one that stands out for its lethal venom. It is aggressive, large (can fill the palm of your hand), fast and so poisonous that the amount of poison needed to kill a mouse is just 6 micrograms intravenously.

Some scientists consider this the most toxic spider in the world. For others, the banana spider is a peculiar specimen because it can cause a somewhat curious effect in men, the toxin it produces can create an erection of 4 hours at least. But don’t be fooled, it is painful and can lead to greater evils if it does not receive treatment.

The spiders we are going to take a look at today don’t particularly stand out for their venomous abilities but for their appearance. A single glance at these spiders (with a magnifying glass as they are tiny) will cause you to be surprised once again by the wonderful creatures that we can find in nature. 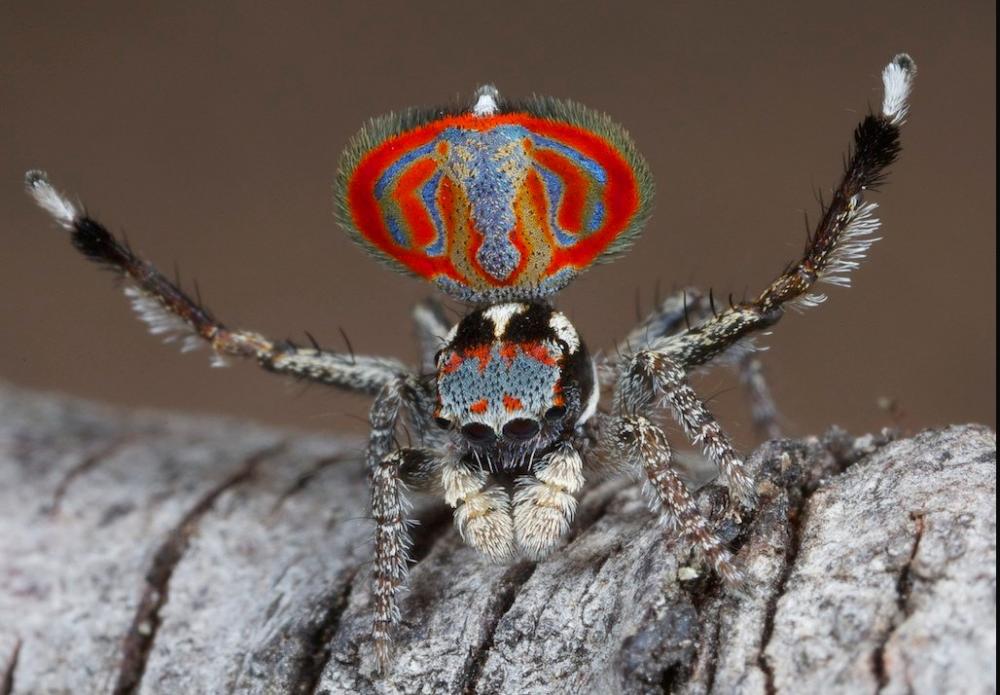 The Elephant spider otherwise known as the peacock spider is considered one of the most beautiful spiders, thanks to its beautiful colours and the dance that the male spider performs to attract the attention of females. In 2015, a team of scientists from the University of California at Berkeley (USA) presented the Maratus Elephant in Australia as one of several undiscovered specimens. The spider was discovered in Sydney by the photographer Jürgen Otto. When taking a closer look at the spider, you will see the silhouette on an elephant on the back flaps of his body. It’s a very small spider, only about 2-5 millimeters so it’s necessary to use a magnifying glass or a powerful lens to perceive its particular beauty. It is a peculiar spider because when the spider does not carry out the courtship, it doubles its corporal zone of exhibition near its abdomen. 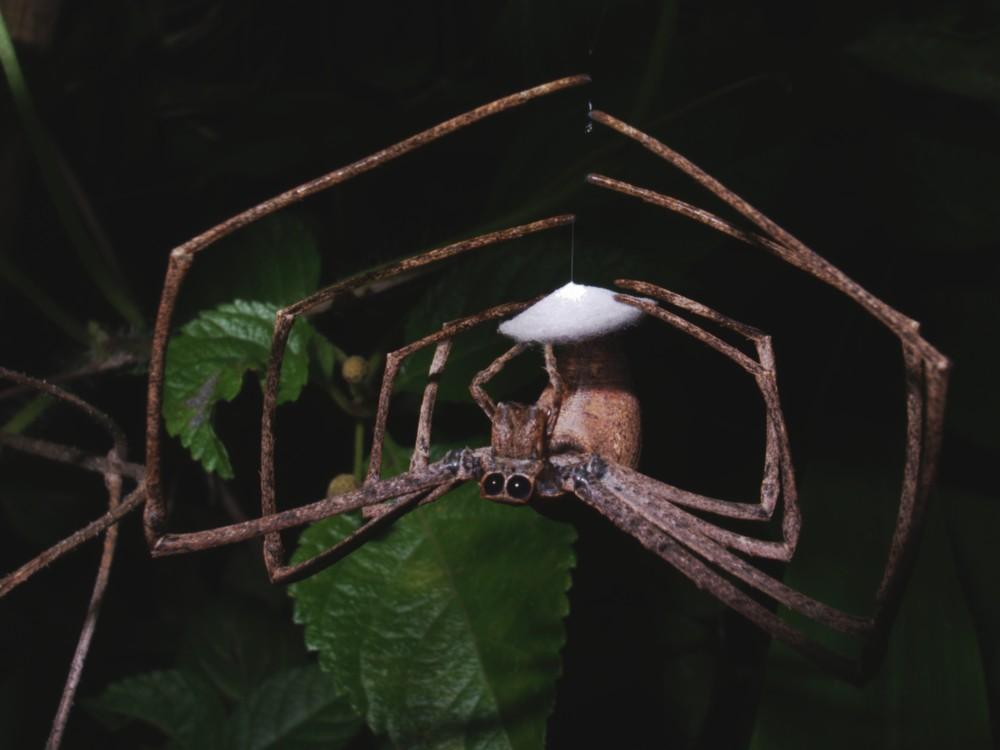 The most common type of the Deinopidae family that exists is the Deinopis. These creatures are known as ogre-faced spiders or gladiator spiders which are found in all tropical and subtropical regions of the world, especially in South America, Africa and Oceania. They measure about 2 cm and mainly have nocturnal habits, as their spherical eyes allow them to see better in the dark. A fun fact about them is that, when they hunt their prey, they weave a kind of net between their legs and wait for the prey to be at a suitable distance to lie on top of it catching its victim with the net, just like the recent Roman gladiators, the net fighters. 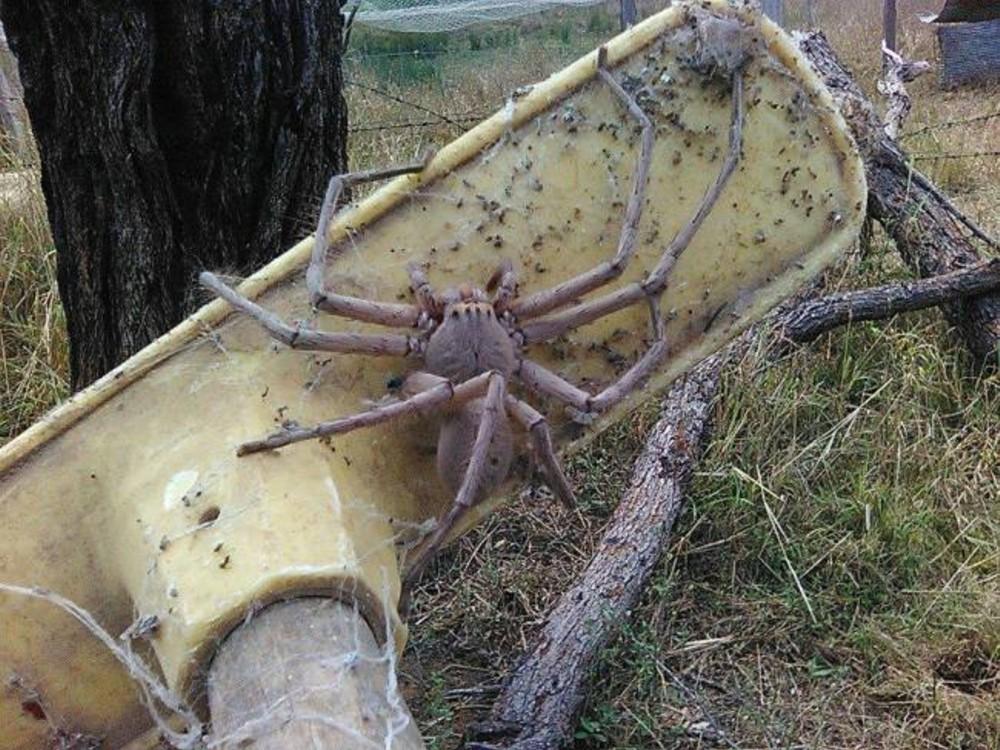 The giant hunting spider (Heteropoda maxima) is the world’s largest legged spider. To give you an idea, it can be up to 30 centimeters long but the reason why it can grow to such a large size remains a mystery to scientists. These spiders look a lot like crabs and they often hide in caves so their growth is slow but forceful. The giant hunting spider feeds on frogs and crickets and only lives in Laos. 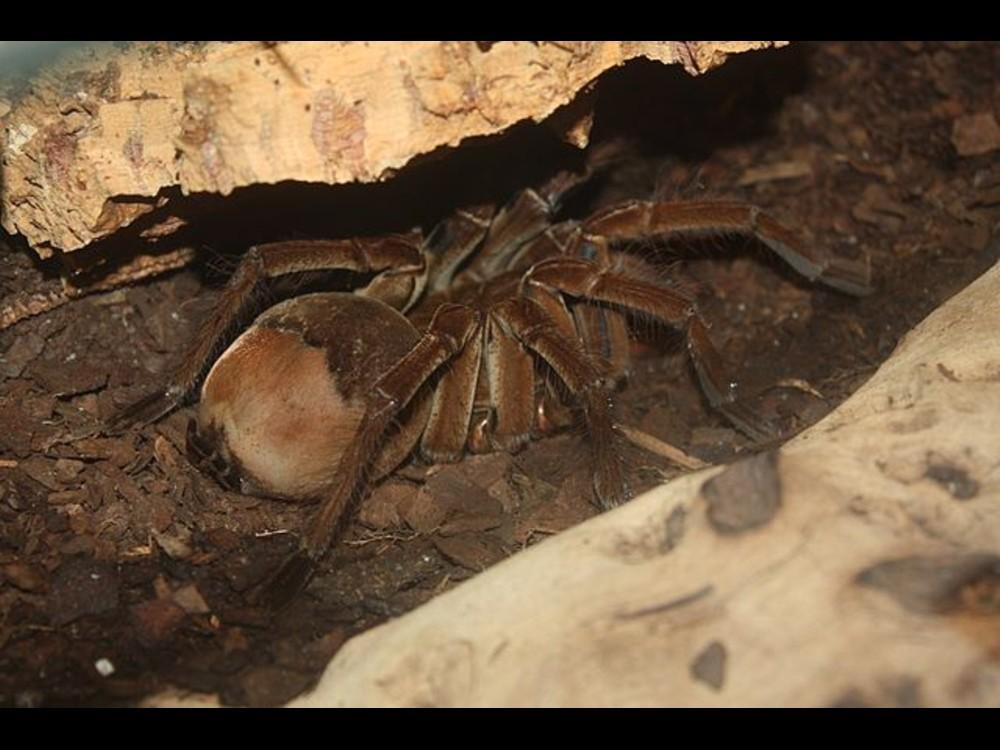 If you look at their legs, the bird-eating goliath spider is the second largest spider in the world. Its legs can encompass a full human foot and it makes strange noises when moving due to its size, a kind of metallic sound, as if it were a horse’s hoof. This enormous spider can kill a small mammal by injecting venom through its tusks. 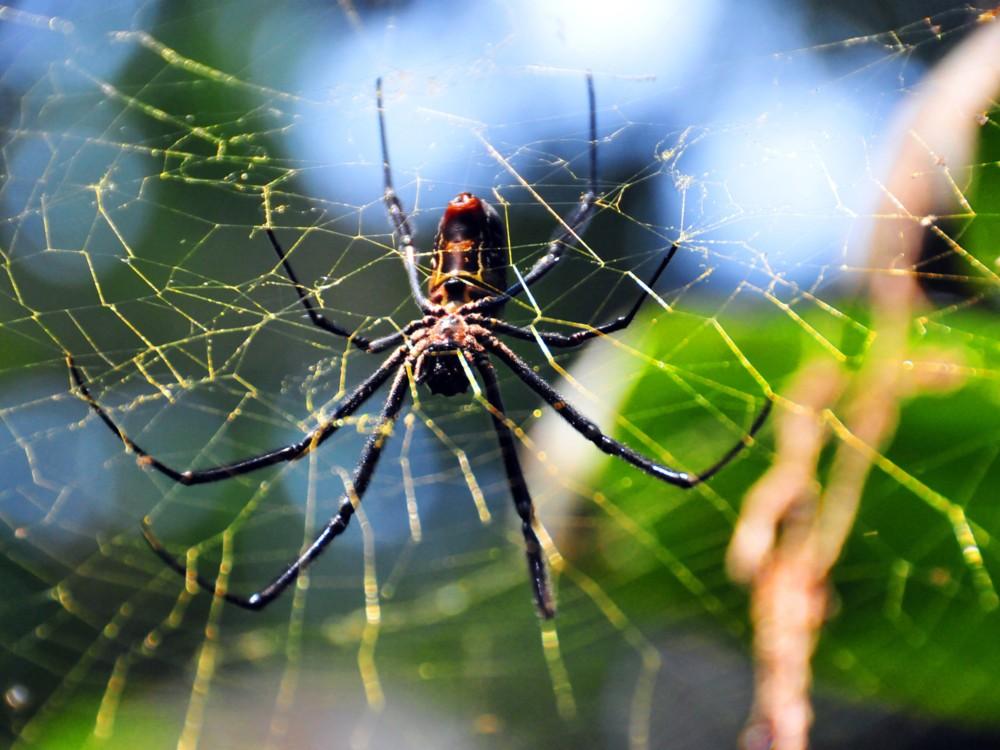 Gold silk spiders that belong to the Nephilia family are very particular because the silk they produce is yellowish in colour and with a little bit of sun exposure it becomes golden, as if it were gold fibers. These spiders can be found all over the world like South America, Africa or Australia. They favourite prey are grasshoppers, moths and beetles. Once again, their venom is of no concern to human beings as their bite never become fatal. The most damage it can cause is pain, irritation and shortness of breath especially in people with allergies. 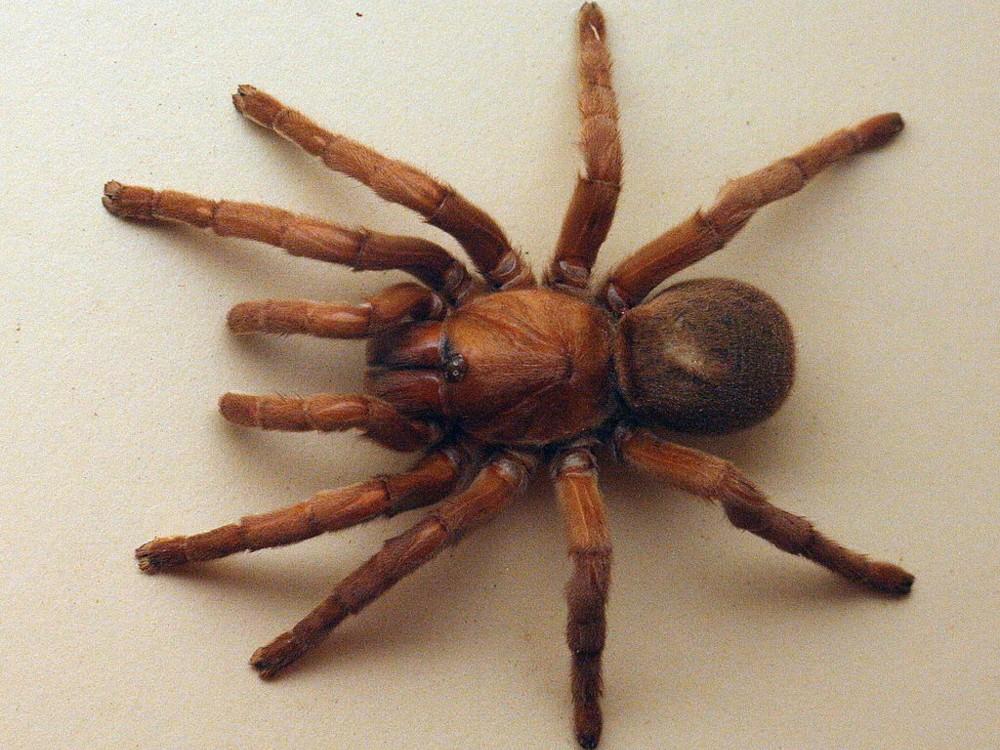 Most of the spiders in this family are able to build trap burrows to catch their victims. This spider is mostly common in regions with extremely hot climate, although some species can also be found in warmer countries. How do you prepare the trap? First, the spider opens a deep cylindrical hole in the ground, 30 to 60 centimeters wide and several centimetres wide and then covers it with a kind of door made of silk paper and earth- a perfect camouflage. The spider remains at the bottom of the hole. As soon as the insect approaches, it comes out, catches its prey quickly and drags it to the bottom to enjoy its delicacy. They are usually black or brown. 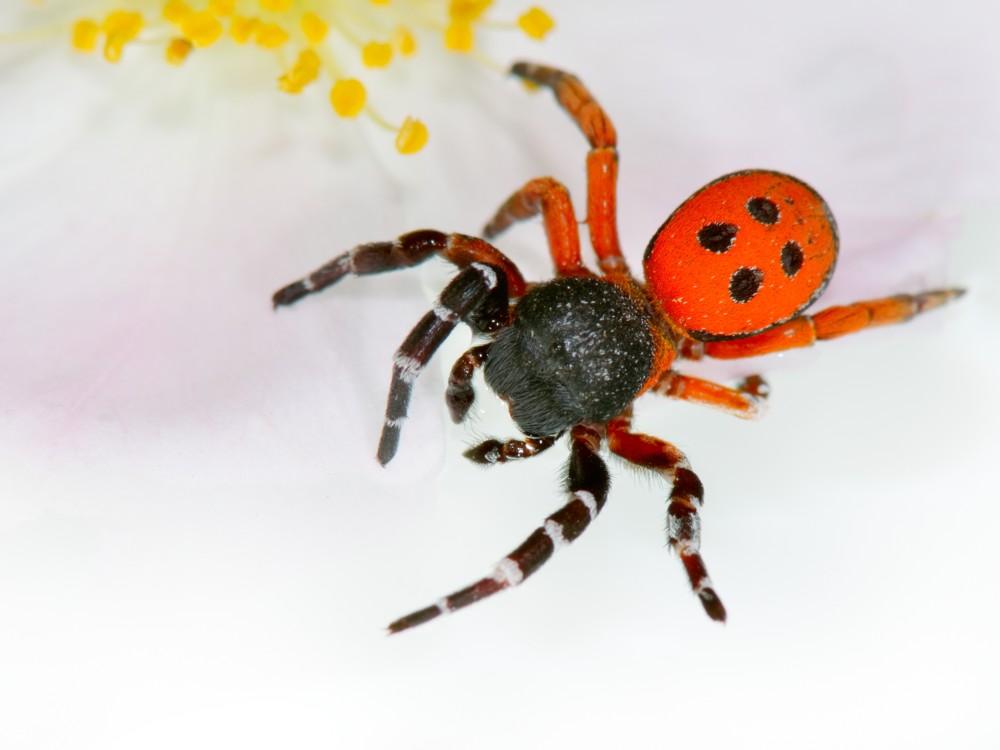 The ladybird spider (Eresus sandaliatus) is one of the rarest in Europe. It lives in silk-covered burrows and can be found all throughout northern and central Europe. This fascinating spider has black dots, four large and two smaller at the back along with a bright orange or red color that makes them resemble ladybugs. The only specimens that present this curious characteristic are the males. The females are all jet black, as are the males when they are still very young. 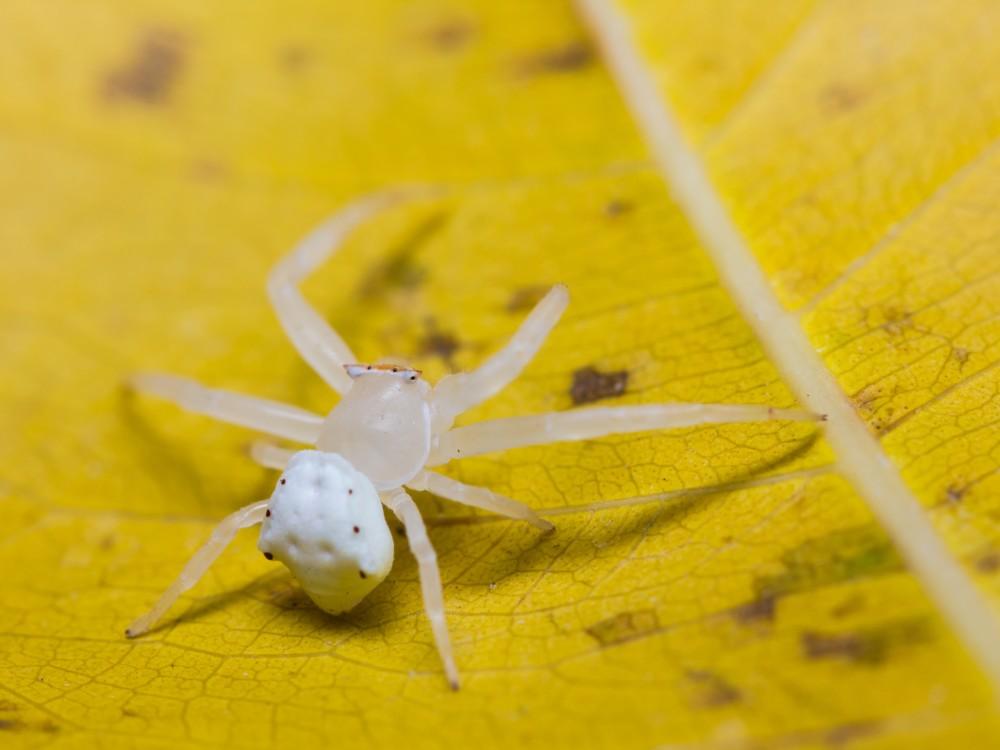 Crab spiders or Misumena vatia are very common in Eurasia and North America, although little is known about them. It’s characteristic shape, color and venom, making it one of the most striking spider. Habitually we can find them in the flowers, because their favorite prey are the bees. Their speed of movement and powerful venom do the rest. 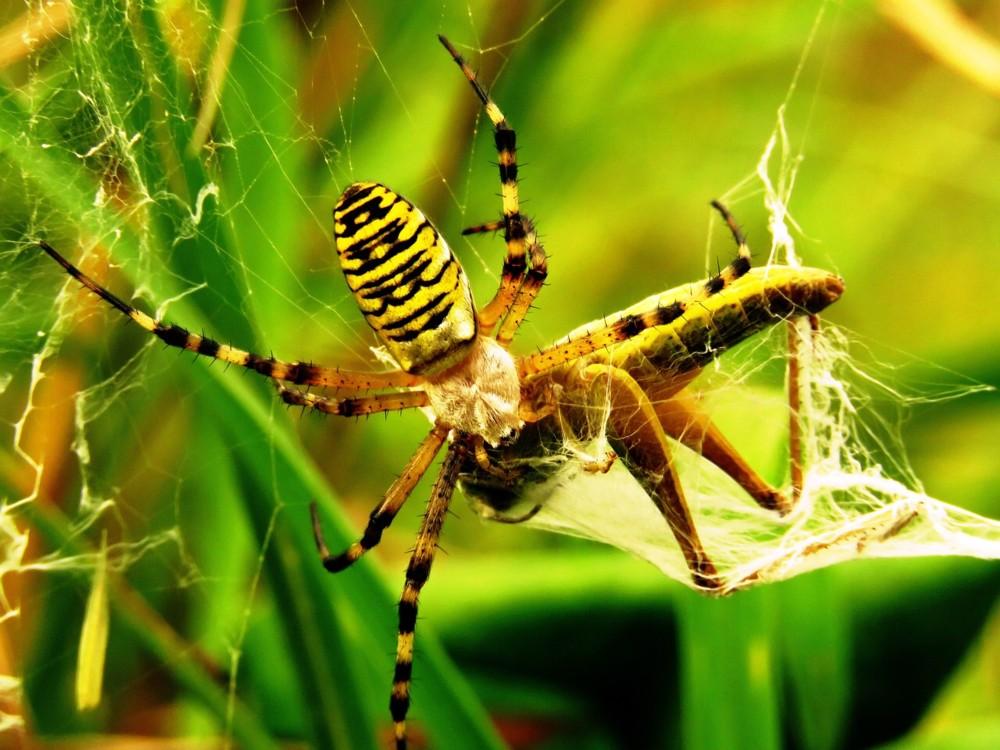 The tiger spider or Scytodes globula can be found mainly in Chile but also in Peru, Uruguay or Argentina. In order to catch its victims, the tiger spider moves stealthily towards its victim and spits out a very sticky web. It then quickly approaches and inoculates the poison. This method of attack makes it easier for him to hunt bumblebees, cockroaches or even other spiders but it is harmless to humans. In 2013, they discovered a tarantula of this type, in Sri lanka, but this particular one was as large as a human face and was very poisonous. 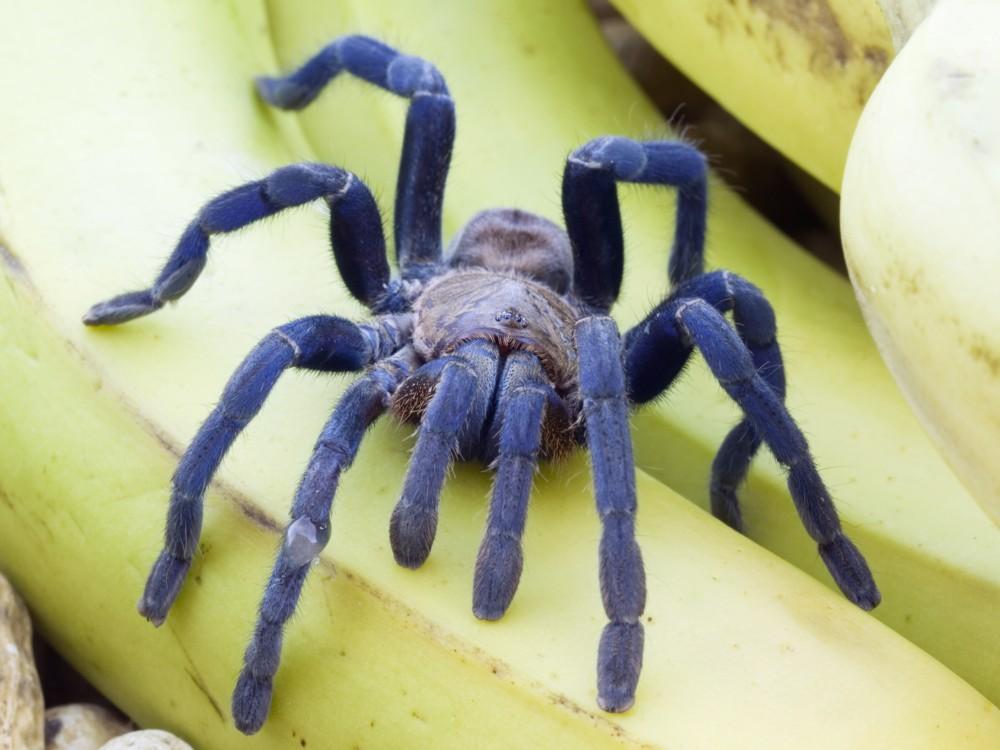 We now focus on the cobalt blue tarantula or Haplopelma Lividum Cobalt Blue. This spider is aggressive, fast and large in size. Its body is up to 10 centimetres long and its legs can measure up to 30 centimetres. Its venom does not cause serious harm to humans, but the bite is quite painful. 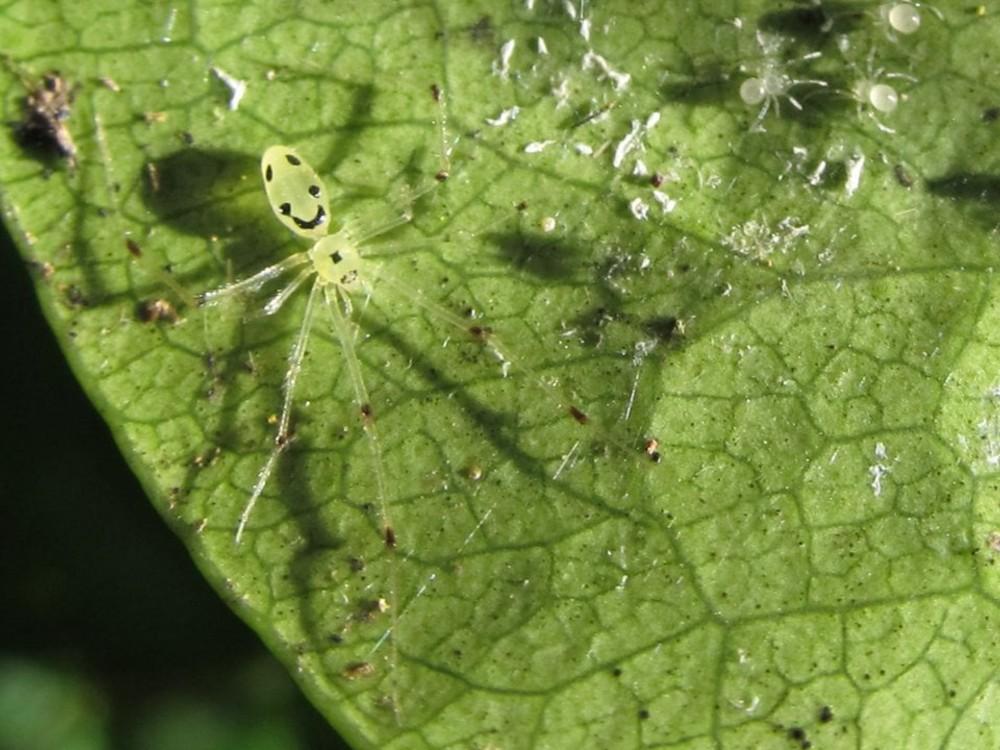 Theridion grallator, also known as the Hawaiian happy-faced spider, can be found on the islands of Oahu, Molokai, Maui and Hawaii. As we can see in the image, its most striking feature is that it presents unique patterns that resemble a smiling face and decorates its abdomen. It is probably an effective strategy to deter predatory birds. 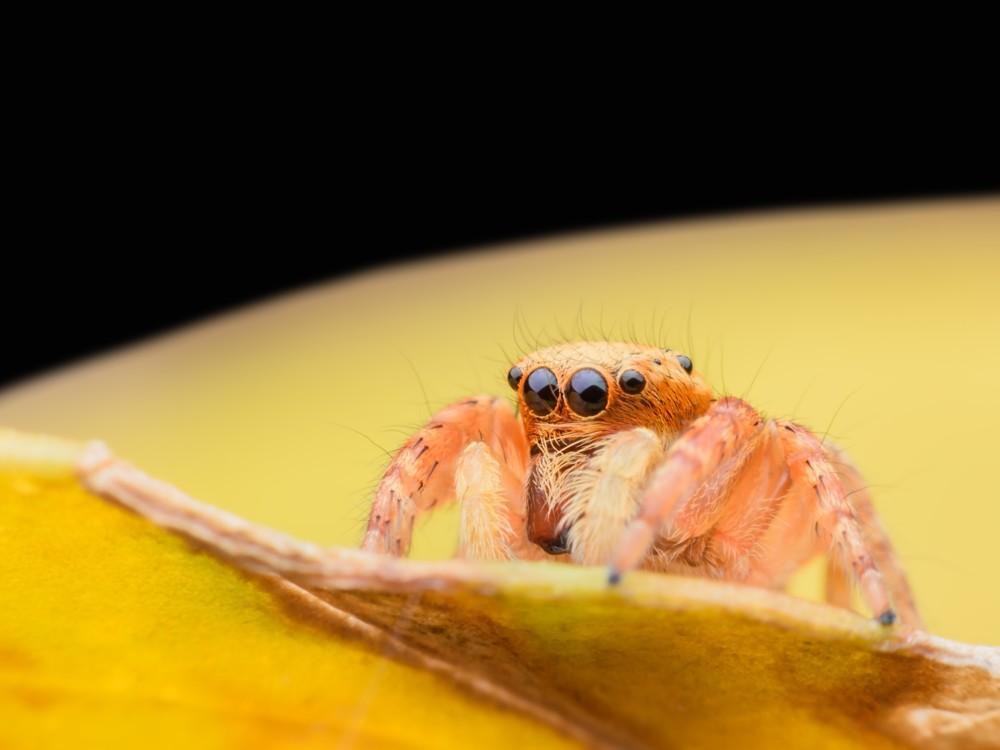 There are many jumping spiders; about 4,000 species described. They have become known for their effective vision (something unusual among spiders) and their great ability to jump as a successful combination for hunting. They are quite small spiders, just a few centimeters long and they like to hunt their prey by stalking it. Regarding its venom, it is not considered dangerous for humans and actually the jumping spider hides as soon as it notices a human being nearby. 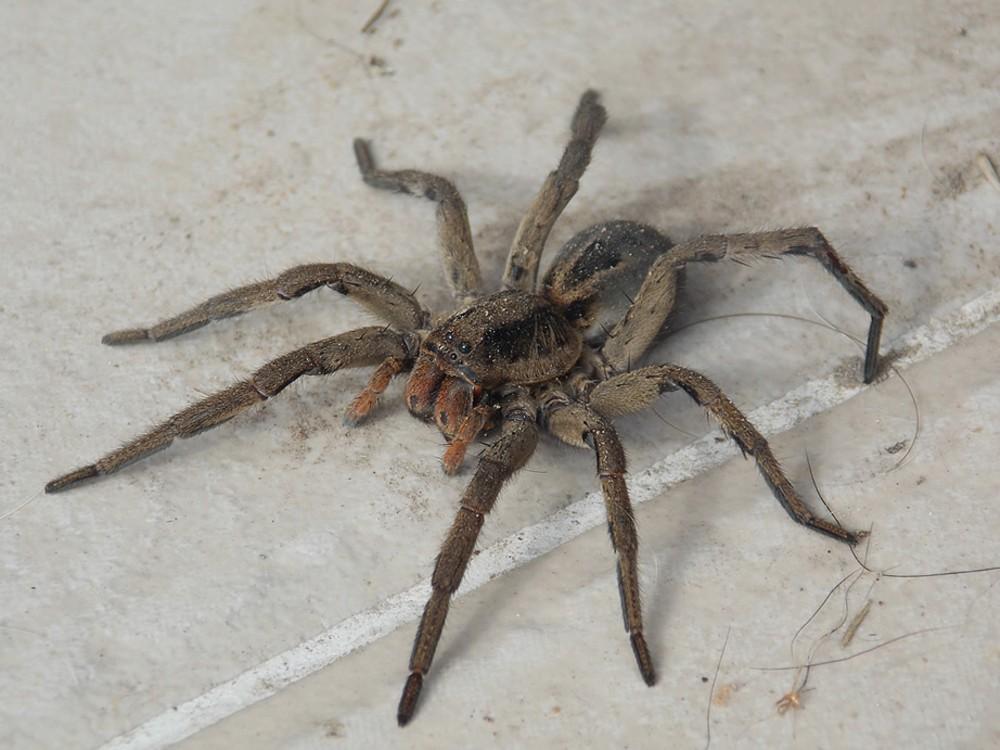 Just terrifying. The wolf spider or Lycosa tarantula does not need any traps or tricks to catch its prey as it is an agile runner that uses brute force to put an end to any unscrupulous movement approaching its environment. He places it on his back before taking the fatal bite. This hunting spider can be found all over the world and is the largest spider on the old continent. Females measure 27 to 30 mm and males 19 to 25 mm. But don’t not worry! In spite of  it being big, it’s very rare that the wolf spider will bite a human being, it usually hides/runs when facing a bigger enemy than usual. 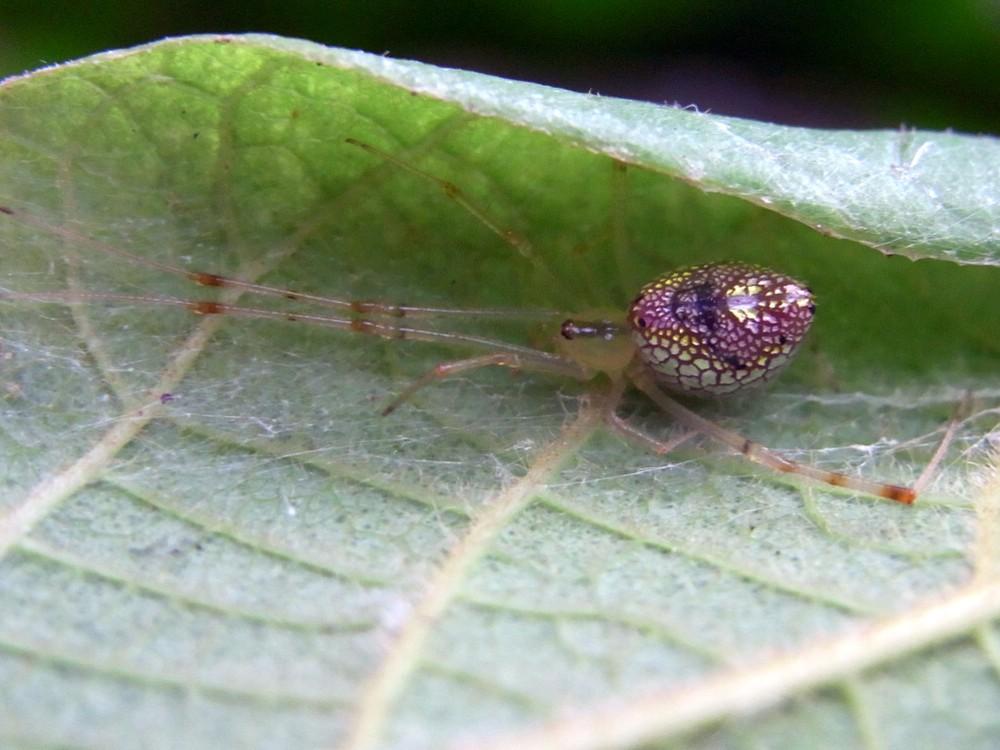 The mirror spider or Thwaitesia argentiopunctata is a species of spider found primarily in Australia. It’s body length is about 3 mm for males and 4 mm for females. It’s abdomen is decorated in cream, green, yellow and red. Why is it called a mirror spider? Because they have reflective silver patches on their abdomens that can change size depending on how threatened the spider feels. 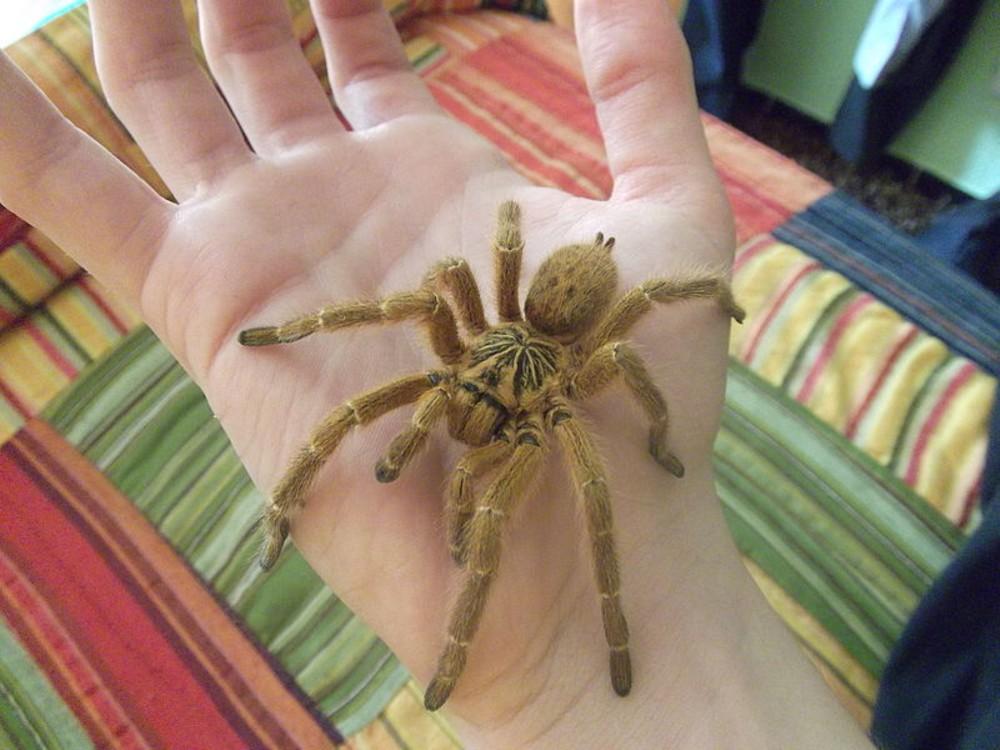 The orange baboon tarantula or Pterinochilus murinus is a species of tarantula located in the central and southern regions of Africa. This spider has all the characteristics we would probably not want to see face to face with a spider: a large, hairy body, a pair of powerful black tusks, a poisonous bite, a horned torso, and eight legs that allow it to cling to where it is needed. 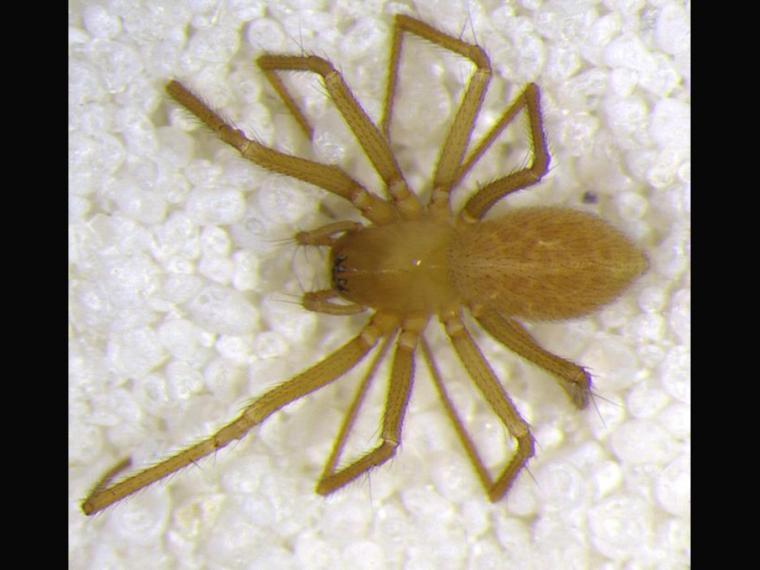 A new (and rare) dwarf spider species has been discovered in a cave on the Stygeon River in southern Indiana. Only about 2 mm long, Islandiana lewisi is believed to feed on even smaller arthropods. The spider is probably harmless to humans.

Interesting facts about the Moon

Animals that feed on blood